Scientists have come up with a new tool for identifying which Martian rocks are more likely than others to hold signs of ancient life.

The system will help NASA's next Mars rover seek out rock samples that are as pristine and unaltered as possible, giving it the best chance of identifying microbial life, because they retain much of their original composition.

The technique, which uses a form of spectroscopy – the interaction of matter with electromagnetic radiation – will be built into the next rover that NASA sends to the Red Planet in 2020. Rock samples will be collected by the buggy and then retrieved by human astronauts several years later, for further analysis on Earth.

"This may help in deciding what samples the 2020 rover will archive," said one of the team, Roger Summons from MIT. "It will be looking for organic matter preserved in sediments, and this will allow a more informed selection of samples for potential return to Earth."

Raman spectroscopy is a technique commonly used by geologists to identify chemicals in ancient rocks without having to disturb them. It works by measuring the very small vibrations of atoms within the molecules of a certain material.

From this, geologists can figure out what a rock is made up of, because atoms and molecules vibrate at different frequencies depending on what chemicals they are bound to – but something more refined is required for Mars. 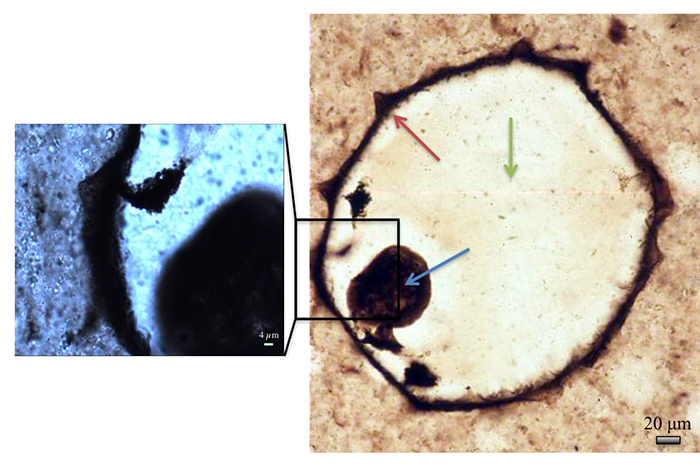 Raman mapping techniques in action on a fossil. Credit: MIT

Using ancient sediment samples from Earth, they spotted some hidden data in the Raman spectra that helped them estimate the ratio of hydrogen to carbon atoms in the rock.

This indicates how much change a rock has gone through, as the more heating it experiences over time, the less hydrogen there is.

That kind of insight is useful on Mars for spotting rocks that have stayed unchanged for long stretches of time. By analysing the Raman spectra of Mars's rocky terrain, NASA's rover will be able to look for samples that have been well-preserved on the planet's surface, as they'll contain relatively more hydrogen.

The MIT team tested their system on an ancient fossil specimen, plus a bunch of common rock samples where the chemical composition was already known. In both cases, the new data analysis technique worked as expected.

There's going to be plenty of opportunity to put the method through its paces on our own planet, and in doing so, geologists will also be able to discover more about the history of Earth.

"We're hoping to understand, for example, when did the biological carbon cycle that we have on the Earth today first appear? How did it evolve over time?" said Summons.

"This technique will ultimately help us to find organic matter that is minimally altered, to help us learn more about what organisms were made of, and how they worked."

The research has been published in Carbon.