Researchers have created the world's first artificial retina using soft synthetic tissue, which they say could be used to develop a new generation of less-invasive bionic eye implants in the future.

Made from a combination of water-based hydrogel droplets and light-sensitive proteins, the synthetic retina is designed to mimic the functionality of its biological counterpart while existing in harmony with the tissue that makes up the rest of the inner eye.

"The human eye is incredibly sensitive, which is why foreign bodies like metal retinal implants can be so damaging, leading to inflammation and/or scarring," says chemical biologist Vanessa Restrepo-Schild from the University of Oxford in the UK.

"But a biological synthetic implant is soft and water based, so much more friendly to the eye environment." 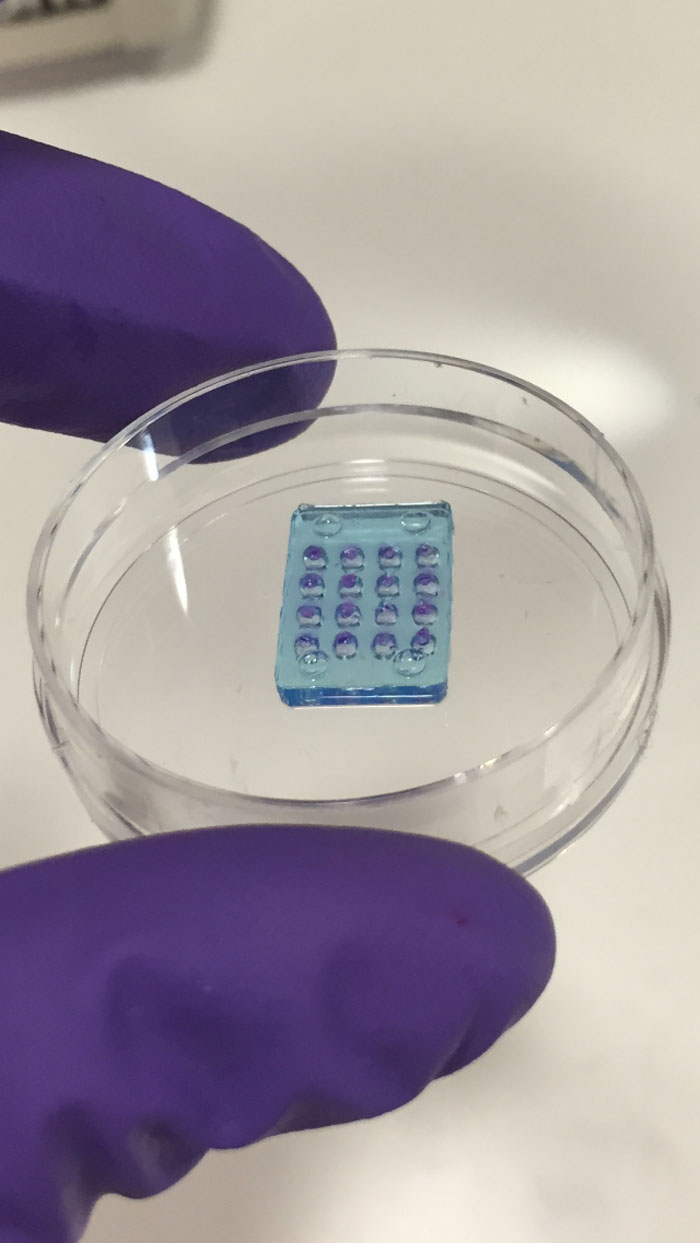 The retina is a membrane positioned at the back of the eye, where millions of light-sensitive cells called photoreceptors register photons (or light particles) channelled through the pupil, which sits at the front of the eye.

When photons hit the membrane, the photoreceptors convert the light into electrical signals that travel via the nervous system to the brain, which interprets the signals, ultimately helping us to picture the world around us.

At least, that's what they do if your eyes are healthy. Gene mutations can lead to retinal degeneration, such as conditions like retinitis pigmentosa, where the photoreceptor cells die off, meaning they can't convert the light into signals our brain can understand.

This is where the team's artificial retina comes in.

Acting like a grid of 16 pixels, these hydrogel cells mimic a very basic, very low-resolution retina. Lab tests show the device is capable of registering simple, blocky, grey-scale images based on light patterns shone onto the array. Nothing like a real retina, but it's a start.

"The synthetic material can generate electrical signals, which stimulate the neurons at the back of our eye just like the original retina," says Restrepo-Schild.

It's not the first synthetic retina we've seen – researchers have been studying the concept for decades, figuring out ways to design bionic eyes that respond to light in the absence of healthy photoreceptor cells.

But despite the success of previous artificial retinas, Restrepo-Schild suggests a soft, water-based array like her prototype would be less likely to have an adverse reaction when implanted in the eye than mechanical devices incorporating rigid, unyielding materials.

"I have taken the principles behind vital bodily functions, e.g. our sense of hearing, touch, and the ability to detect light, and replicated them in a laboratory environment with natural, synthetic components," she says.

"I hope my research is the first step in a journey towards building technology that is soft and biodegradable instead of hard and wasteful."

The researchers acknowledge their prototype – which has not yet been tested in living tissue – is just a proof of concept for now, but are working towards developing it into bionic implant..

The team is also investigating how to make the device register colours – not just detect light in black and white – and eventually hope to test the synthetic implant in animal studies. If all goes well, clinical trials involving human subjects could be on the cards.

In light of the amount of research that still needs to be done, it will be years before a soft implant like this can treat actual patients faced with retinal degeneration, but with retinitis pigmentosa estimated to affect one in 4,000 people worldwide, any advances in this area are good news.

The research is published in Scientific Reports.