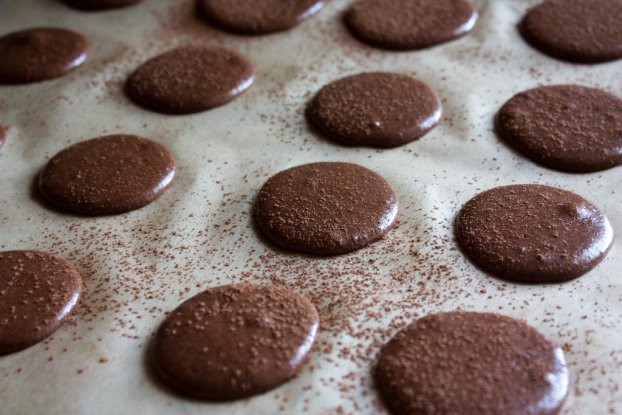 We thought food science couldn't get more awesome when researchers last week revealed a cooking method that halves the calories of rice. But now chemists have shown that by simply changing the way they store and roast cacao beans, they can boost chocolate's antioxidant content AND make it taste better at the same time. Life = complete.

A team from the University of Ghana and Ghent University in Belgium has discovered that, simply by storing cacao bean pods unopened for seven days before slow-roasting them at a lower temperature, they can produce chocolate that's more flavourful and has a higher percentage of polyphenols - the class of blood vessel-supporting antioxidants also found in red wine.

Usually when making chocolate, there's a trade-off between polyphenol content and flavour. After cacao pods are harvested, they're immediately split open so that the white or purple cacao beans can be removed and fermented. The beans are then roasted at a temperature of around 120 degrees Celsius (248 Fahrenheit) for 20 minutes, which develops their rich, chocolate-y taste, but also degrades their antioxidant content.

Presenting their work at a meeting of the American Chemical Society, lead researcher Emmanual Ohene Afoakwa explained that the team has now managed to minimise this degradation by simply changing the way the beans are stored and roasted.

"We decided to add a pod-storage step before the beans were even fermented to see whether that would have an effect on the polyphenol content," said Afoakwain a press release. "This is not traditionally done, and this is what makes our research fundamentally different."

To find this out, they split around 300 cacao pods into four groups, and either fermented them right away, as producers normally would, or stored them for three, seven or 10 days before splitting them open. They then roasted them at a reduced temperature of around 116 degrees Celsius (242 Fahrenheit) for 45 minutes to make sure they developed an extra delicious taste.

They measured the starting and finishing antioxidant content of all four groups, and found that beans that were stored for seven days had the highest antioxidant content after being roasted. The results on pod storage have been published in the African Journal of Food, Agriculture, Nutrition and Development, while the team's research on ideal roasting time and temperature are ongoing.

Afoakwa believes that the pod storage makes a difference because, during this time, the sweet pulp surrounding the beans in the pod releases its liquids and alters the biochemical and physical composition of the beans before they're fermented. "This aided the fermentation processes and enhanced antioxidant capacity of the beans, as well as the flavour," Afoakwa said in the release.

The next step is to study the roasting time in more detail to see if there's a way to preserve even more antioxidants and flavour in the chocolate making process.

But, he added in a press conference, before you get too excited, it's important to remember that only dark chocolate contains high amounts of cocoa (the roasted derivative of cacao beans). Milk chocolate is okay, but is diluted down, and white chocolate doesn't really contain any cocoa at all. So choose your chocolate variety wisely - and then remember to enjoy it.