Back in 1966, Japanese physicist Yosuke Nagaoka came up with the idea of an unusual new mechanism that could cause ferromagnetism - the phenomeon that powers magnets as we know them.

His idea made sense theoretically, but it's never been observed in natural materials. Now, we have our first signs of it happening in the lab.

Once again we're indebted to quantum physics for the discovery. Scientists were able to generate what they call "experimental signatures" of Nagaoka ferromagnetism (as it came to be named) in a tightly controlled, custom-made quantum electrical system.

While it's too early to use this new magnetism setup practically, what makes the finding exciting is the indication that Nagaoka's 54-year-old prediction is right; and that could have a major impact on how quantum systems of the future get developed.

"The results were crystal clear: we demonstrated Nagaoka ferromagnetism," says quantum physicist Lieven Vandersypen, from Delft University of Technology in the Netherlands.

"When we started working on this project, I wasn't sure whether the experiment would be possible, because the physics is so different from anything else that we have ever studied in our lab."

The simplest way to think about Nagaoka ferromagnetism is as a child's puzzle game, the one with sliding blocks you have to put into a picture or pattern. In this analogy, each block is an electron with its own spin or alignment.

When the electrons align in one direction, a magnetic field is created. Nagaoka described a sort of ideal version of itinerant ferromagnetism, which is where electrons are free to move but the material stays magnetic.

In Nagaoka's version of the puzzle game, all the electrons are aligned in the same direction – that means however the puzzle blocks are shuffled around, the magnetism of the system as a whole stays constant.

Because shuffling the electrons (or puzzle tiles) around makes no difference to the overall configuration, less energy is required by the system. 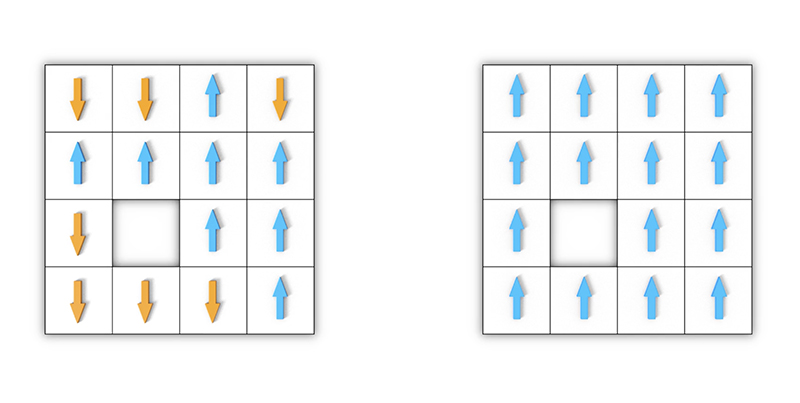 Nagaoka ferromagnetism in puzzle form, with all the spins aligned on the right. (Scixel de Groot for QuTech)

To show Nagaoka ferromagnetism in action, the scientists actually built a 2D, two-by-two lattice made up of quantum dots, tiny semiconductor particles that have the potential to form the next generation of quantum computers.

The whole system was cooled down to close to absolute zero (-272.99°C or -459.382°F), then three electrons were trapped inside it (leaving one 'puzzle block' empty). The next step was demonstrating that the lattice behaved like a magnet as Nagaoka suggested it might.

"We used a very sensitive electric sensor which could decipher the spin orientation of the electrons and convert it into an electrical signal that we could measure in the lab," says quantum physicist Uditendu Mukhopadhyay, from Delft University of Technology.

Having previously been described as one of the hardest problems in physics, it's a significant step forward in our understanding of both magnetism and quantum mechanics, showing that a long-standing idea about how ferromagnetism works at the nanoscale is actually correct.

Further down the line the discovery should help in the development of our own quantum computers, devices able to take on calculations beyond the scope of our current technology.

"Such systems permit the study of problems that are too complex to solve with today's most advanced supercomputer, for example complex chemical processes," says Vandersypen.

"Proof-of-principle experiments, such as the realisation of Nagaoka ferromagnetism, provide important guidance towards developing quantum computers and simulators of the future."