Ground Squirrels Have Four Specific Personalities That Shape Their Ecosystems

Humans aren't the only animals with big personalities. Individual traits, temperaments, and coping styles have been observed among an enormously diverse range of animals, including sea anemones, fish, birds, mammals, spiders, and lizards. In fact, there are some experts who think personality exists across the entire animal kingdom.

Squirrels, it would seem, are no exception. Over three years of research among the Rocky Mountain's gold-mantled ground squirrel (Callospermophilus lateralis) has revealed four main personality traits, including boldness, aggressiveness, activity level, and sociability.

These traits are also seen among other ground-dwelling squirrels, such as yellow-bellied marmots (Marmota flaviventer), Siberian chipmunks (Tamias sibiricus), and Belding's ground squirrels (Urocitellus beldingi), and they seem to have a strong impact on how an individual chooses its ecological niche and uses its resources.

Gold-mantled ground squirrels that are bolder, for instance, move faster and tend to maintain a larger core range than shier ones.

Individual choices like this have a ripple effect on the overall structure of the environment, and yet the role that personality plays in shaping habitat preferences has only been explored among a handful of species.

North American red squirrels that are more active, for example, are also more likely to travel further away and cross into the territory of other red squirrels, even though this species is generally considered asocial.

"This adds to the small but growing number of studies showing that individuals matter," says wildlife ecologist Jaclyn Aliperti from the University of California, Davis, and the study's lead author.

"Accounting for personality in wildlife management may be especially important when predicting wildlife responses to new conditions, such as changes or destruction of habitat due to human activity."

Identifying personality traits among animals is a tricky business that requires gathering a lot of data.

"Personality is a subjective word that many can relate to, but in our field, you cannot constitute a behavior as a certain personality type without defining it and statistically showing that individuals consistently show that same behavior time and time again," Aliperti tells ScienceAlert.

Over the years, scientists have put together several standardized ways to quantify animal personality traits, and four of these tests were used for the current study on gold-mantled squirrels.

The first experiment conducted on ground squirrels was an open field test, where free-ranging wild squirrels were caught and placed in an enclosed box with cut-out holes and lines. Their response to movement outside the box and their exploration of the holes were then observed to determine the squirrel's tendencies toward movement and investigation.

The second test inserted a mirror into the box so that researchers could watch how individuals responded to 'another' of their kind (squirrels can't recognize their own selves in reflections). This informed the squirrel's sociability and aggression.

In the third test, researchers quietly and slowly approached individuals in the wild to see how long it took for them to run away. This is a common way to determine an individual's shyness.

And in the final test, squirrels were caught in a simple trap that does them no physical harm to measure the squirrel's tendency to remain calm. 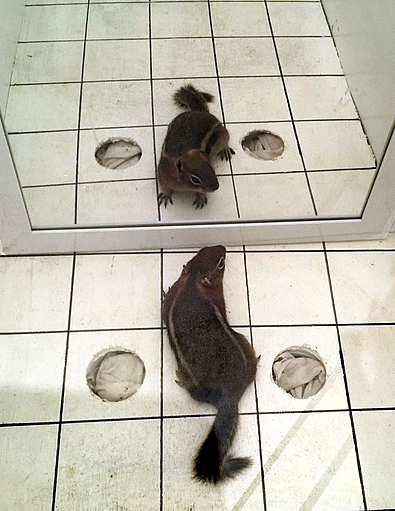 These experiments were conducted over three summers in the squirrels' home ranges and were repeated among the same individuals several times when possible.

Sifting through their data, the authors found no sign of an exploratory personality type among squirrels, although it's possible this trait could be identified using different tests. All the other major behavior categories were present.

Meanwhile, squirrels with more aggressive personality types showed both larger home ranges and larger core areas. They also dominated rocky perches. As a result, researchers think it is this particular trait that pushes the species into new ranges.

Those individuals that scored highest for all four personality traits had more perches, greater home ranges, and larger core areas compared to those that scored the lowest for all the traits.

"It is not surprising that more active, bold and aggressive individuals tended to have greater access to perches, as these behavioral types, which are often correlated as proactive 'or' first behavioral syndromes, are typically thought to exhibit greater use of resources and space," the authors write.

But what is surprising is how social some of these proactive individuals appear to be. Similar to red squirrels, gold-mantled squirrels are also considered asocial.

In fact, the best perches were often held by those individuals that scored the highest for sociability. Even for asocial creatures, being social might have its advantages.

"[P]erhaps more sociable squirrels are more likely to actively search for [their own kind], increasing the probability with which they share overlapping home ranges and therefore resources such as perches," the authors suggest.

But animal personality is a hard science, Aliperti explains to ScienceAlert. At its very roots, it depends on researchers categorizing animal observations, which means we can never really be sure if there are other traits or behaviors that we are failing to account for.

Still, if we ignore animal personality altogether, we will no doubt miss a big part of the picture.

The study was published in Animal Behavior.