It should be simple. When temperatures on Earth get hotter, huge amounts of water ice trapped in giant glaciers begin to thaw, releasing water into the oceans, and causing sea levels to rise. It's the story of our lives.

By contrast, when global temperatures plummet, which happens during ice ages, sea levels proceed to drop, as water content retreats from the ocean, freezing once more in huge inland ice sheets.

This epic, ongoing cycle of ice ebb and flow – the transitions from glacials to interglacials – has been occurring since time immemorial. But there's a problem.

For years now, scientists tracking these cycles have suggested there's a "missing ice" problem: a mysterious discrepancy between very low sea levels roughly 20,000 years ago, and the volume of ice stored in glaciers at the same time. 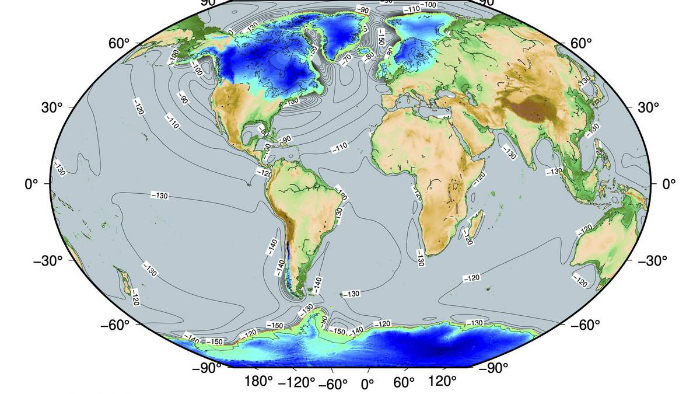 At its heart, the problem is this. During the peak of Earth's last ice age – the Last Glacial Maximum (LGM), which ended approximately 20,000 years ago – sea level is thought to have been about 130 metres (427 ft) lower than it is today, based on ancient coral sediment evidence.

But modelling suggests ice volume in glaciers at this point in time wasn't great enough to explain such a low sea level. So how can we explain this 'missing' ice?

In a new study led by geophysicist Evan Gowan from the Alfred Wegener Institute in Germany, researchers appear to have found a solution.

With a new reconstruction called PaleoMIST 1.0, the researchers were able to model the evolution of global ice sheets way into the past, much farther back than even the LGM.

"It looks like we've found a new way to reconstruct the past as far back as 80,000 years," Gowan says.

The results of the model suggest the anomaly in our data isn't a case of missing ice, but rather mistaken inferences about how low the sea level actually fell during the LGM.

According to PaleoMIST 1.0's ice physics model, the sea level dropped no more than 116 metres below where the waves lap today, with ice volume (being fully accounted for) clocking in somewhere around 42.2 × 106 km3.

"We, therefore, find no basis for the missing ice problem, as our LGM reconstruction is compatible with existing sea-level constraints," the researchers explain in their study.

According to the team, the misdirection of the missing ice argument stems from a couple of factors – firstly, over-reliance on far-field indicators (coral sediment evidence from locations elsewhere in the world), which may not accurately represent global average sea levels as we once thought they did.

Another issue is a long-established but seemingly flawed method used to estimate glacier masses, oxygen isotope ratio cycles – which appears to produce discrepancies when reconciling sea-level height and glacier masses as far back as the LGM, at least.

"The isotope model has been used widely for years to determine the volume of ice in glaciers up to many millions of years before our time," says one of the team, geophysicist Paolo Stocchi from the Royal Netherlands Institute for Sea Research.

"Our work now raises doubts about the reliability of this method."

While the missing ice mystery appears to be solved, the researchers don't expect theirs will be the last word on this topic.

After all, their own solution's incompatibility with oxygen isotope ratio cycle-based reconstructions has, in a way, "created a new missing ice problem", the team admits.

Whether and how that new uncertainty can be resolved is a challenge for another day, in future research that may yield even clearer glimpses of ice sheet evolution in the distant past.