The first humans to set foot on the supercontinent that once joined Australia and New Guinea could have spread across the entire landmass using 'superhighways' in as few as 200 generations, according to new models.

From a band of less than a thousand humans, roughly 50,000 to 75,000 years ago, simulations suggest the continent's population reached a peak of 6.5 million, with people spreading into rainforests, deserts, grasslands, and mountains, from the top of New Guinea right down to Tasmania.

These well-trod paths are based on basic human decision-making, which tends to forge paths to visually attractive areas, while not straying too far from water or requiring too much energy.

"If it's a new landscape and we don't have a map, we're going to want to know how to move efficiently throughout a space, where to find water, and where to camp – and we'll orient ourselves based on high points around the lands," explains archaeologist and computational social scientist Stefani Crabtree from Utah State University.

The analysis is the largest movement-simulation project ever attempted, and while it can't tell us exactly what happened on the continent between 50,000 and 75,000 years ago, many of the superhighways and smaller routes do match up with archaeological data.

Several of these paths, for instance, follow well-documented Aboriginal trade routes, or connect some of the earliest archaeological sites, dating as far back as 35,000 years ago.

Interestingly, the authors found one particularly optimal route pierces right through the arid middle of the continent, which few other studies have identified. 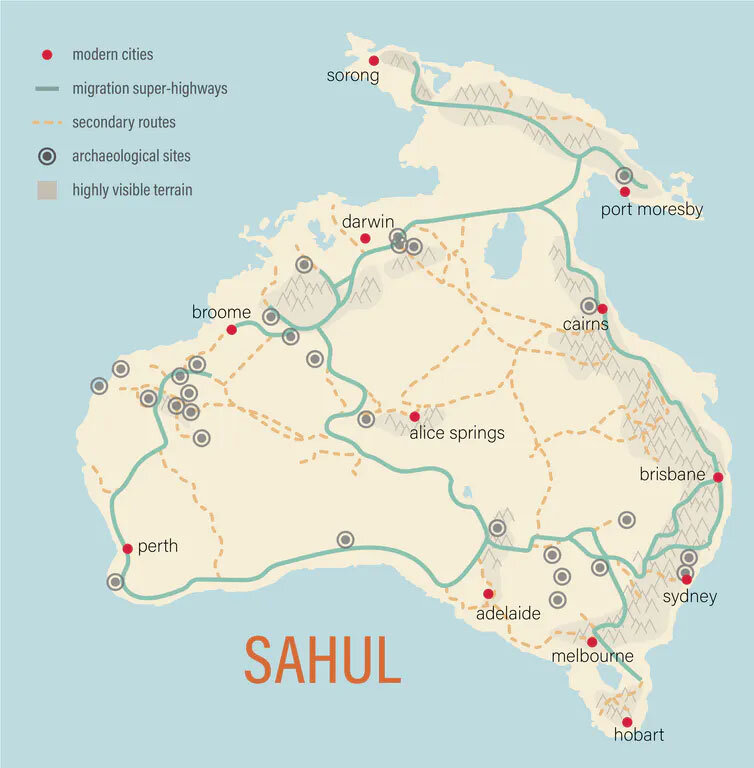 For decades now, scientists have been debating when and how the first humans populated Australia and New Guinea. It happened so long ago, archaeological evidence is scant.

As such, some researchers have turned to genetics and linguistics to re-trace the steps of these first Australians.

Genetic mapping suggests people moved down the east and west coastlines of Sahul before heading inland, while linguistic mapping reveals a general movement from the northeast of the continent to the southwest.

This massive new map largely complements these pathways of movement, while also adding some new routes previously unidentified. The top three best-fitting models suggest people moved inland first, discovered water sources in the interior, and traveled from one to the next, "all while navigating by prominent landscape features", which would stand out on the flat surface of the continent.

As societies and linguistic groups formed, these physical networks, funneled by features in the landscape, could have facilitated the movement not just of people but also of objects and stories, creating rich and highly interconnected cultures.

"In many Aboriginal societies, landscape features are believed to have been created by ancestral beings during the Dreaming," explains archaeologist Sean Ulm from James Cook University.

"The landscape is literally woven into peoples' lives and their histories. It seems that these relationships between people and Country probably date back to the earliest peopling of the continent."

The models were published in Nature Communications and Nature Human Behavior.