The shape of the earliest building blocks of life dating back as far as 3.5 billion years ago may have been identified, due to a new effort to envisage the molecular arrangements of the planet's very first proteins.

Using computer modelling to simulate the configuration of ancient molecules that no longer exist on Earth, scientists traced the outline of what they claim could be a common ancestor to modern enzyme families that enable life to thrive by catalysing electron transfer reactions.

"Life on Earth is electric," researchers from Rutgers University explain on the ENIGMA website, a lab dedicated to studying the Evolution of Nanomachines In Geospheres and Microbial Ancestors.

"The electronic circuitry is catalysed by a small subset of proteins that function as sophisticated nanomachines." 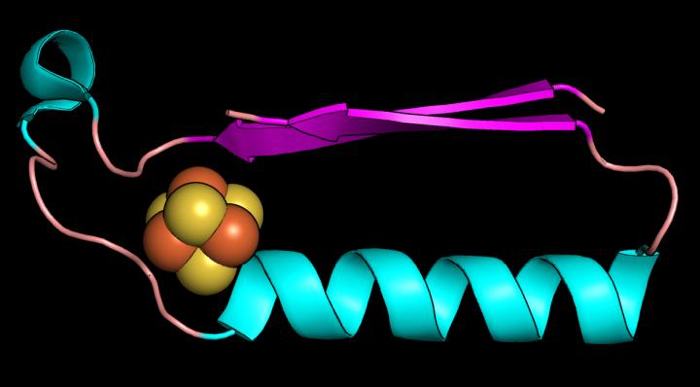 Above: A fold (shape) that may have been one of the earliest proteins in the evolution of metabolism.

But what did these primordial proteins look like, literally millions of millennia ago? It's a giant unknown, and one that frames the existence of the ENIGMA lab, in part funded by NASA through the space agency's Astrobiology Program.

Understandably, it's not an easy question to answer, given the enzymes in question date back to the Archean Eon – lasting from about 4 to 2.5 billion years ago – and are now long extinct. Nonetheless, life had to come from somewhere.

"We think life was built from very small building blocks and emerged like a Lego set to make cells and more complex organisms like us," says environmental biophysicist and ENIGMA principal investigator Paul G. Falkowski from Rutgers University-New Brunswick.

"We think we have found the building blocks of life – the Lego set that led, ultimately, to the evolution of cells, animals and plants."

In the study, the researchers analysed and compared existing 3D protein structures to see if they could determine a common ancestor that might best fit the mould in protein's distant evolutionary past.

Specifically, the researchers were looking to quantify similarities between protein folds – the shapes that chains of amino acids take in three dimensions – to find a simple topological model of what ancient protein molecules might have looked like long ago, before becoming more complex and diverse over billions of years.

"We discovered that two recurring folds were central to the origin of metabolism," the researchers explain in their paper.

"These two folds likely shared a common ancestor that, through duplication, recruitment, and diversification, evolved to facilitate electron transfer and catalysis at a very early stage in the origin of metabolism."

It might not sound like much, but those basic structures – which themselves might have had a singular ancestor – could have been the structural template for the ancient proteins that made everything else possible on Earth (metabolically speaking).

"We hypothesise the first proteins were small, simple peptides (proteins with very short chains) that extracted energy from the environment in the form of electron-donating molecules in the ocean/atmosphere/rocks and moved them to other molecules that accept electrons," one of the team, molecular biologist, Vikas Nanda, told Cosmos.

"Energy is released in this electron transfer reaction and this is the energy that drives all life."

Of course, the team acknowledges that their modelling approach, based as it is on comparing protein topologies, is only capable of demonstrating hypothetical lineages.

In other words, this is only what they think the first proteins looked like. We cannot know for sure, given the limitations of this kind of research.

"In the realm of deep-time evolutionary inference," they say, "we are necessarily limited to deducing what could have happened, rather than proving what did happen."

But that's not to say other experiments couldn't go further in tracing life's family tree. The team points out that they, like other researchers, are actually trying to recreate functional versions of these protein types in the lab.

If they're successful, it will get us a step closer to understanding how biochemistry emerged from geochemistry, the researchers say – something that could help us identify life's building blocks far beyond Earth.

"Ultimately, our goal is for the proposed effort to inform future NASA missions about detection of life on planetary bodies in habitable zones," ENIGMA's website explains.

"Our effort provides a unique window to potential planetary-scale chemical characteristics that might arise from abiotic chemistry, which must be understood if we are to recognise unique biosignatures on other worlds."

The findings are reported in PNAS. (Link not yet live at time of writing.)