Biting into something cold with a damaged or sensitive tooth can trigger a particularly excruciating type of pain, but scientists have never fully understood how this pain signal gets transmitted. Now they've found a prime suspect: a protein called TRPC5.

The protein is found in cells called odontoblasts inside teeth, which form the dentin shell just under the enamel. Odontoblasts support the shape of the tooth; as researchers have now discovered, these cells also act as cold sensors.

They can do this because TRPC5 is an ion channel - a gateway that allows signalling chemicals, like calcium, through cell membranes under certain conditions; in this case, they respond to cold.

New treatments could be developed based on these findings to help with pain or hypersensitivity in the teeth – perhaps delivered through chewing gum or through strips that are applied to the dentin directly.

"This research contributes a new function to this cell, which is exciting from a basic science standpoint," says pathologist Jochen Lennerz, from Massachusetts General Hospital. "But we now also know how to interfere with this cold-sensing function to inhibit dental pain."

Having previously identified TRPC5 as a potential temperature sensor, in experiments with mice the team found those lacking the gene that codes for TRPC5 didn't react to tooth exposure to cold in the usual way. Using chemicals to block the protein ion channels had the same effect. 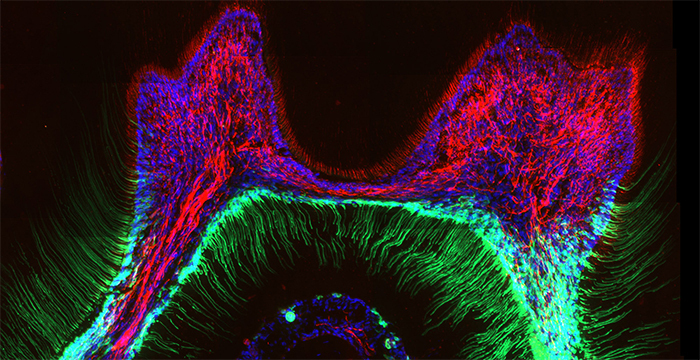 A close analysis of extracted human teeth – they were decalcified, then put into an epoxy resin, then carefully sliced – revealed the same TRPC5 channels in the odontoblast cells, suggesting the same sensing is happening in human teeth as well.

The TRPC5 protein is found in other places in the body, and has previously been shown to sense the cold and trigger certain biological actions. Now we know it's working inside the odontoblasts in teeth too, and that could mean some relief for the 2.4 billion or so people living with untreated cavities in their teeth.

On top of all this, this new study also helps explain why clove oil has been used for centuries as a tooth pain treatment: its active agent is eugenol, which just so happens to block TRPC5. No wonder people have traditionally made use of the oil to reduce sensitivity.

"Once you have a molecule to target, there is a possibility of treatment," says electrophysiologist Katharina Zimmermann, from Friedrich-Alexander University Erlangen-Nürnberg in Germany.

Teeth can become sensitive to the cold due to a cavity, because of gum erosion due to ageing, and for many other reasons – it's one of the side effects of a certain kind of chemotherapy treatment, which can even put patients off from taking the drugs.

The researchers suggest that the cold sensitivity could be a warning signal to the body to help prevent further damage to the tooth – the odontoblast cells become more active in the cold, a drop in temperature that usually means the tooth is more exposed.

Human teeth are very difficult to study, and the research as a whole took more than a decade, but now the new role for TRPC5 and odontoblast cells is something that future research can look into further.

"Our teeth aren't meant to be cut into ultra-thin layers so they can be studied under the microscope," says Lennerz. "I'm excited to see how other researchers will apply our findings."