Galaxies forming at the time of the Big Bang. Credit: NASA
PHYSICS

Two separate teams of physicists have been examining the flow of time in the Universe, and they’ve proposed that some 14 billion years ago, the Big Bang could have given rise to a second, inverse mirror universe where time moves in the opposite direction: it moves backwards, not forwards.

Basically, if we were looking at the mirror universe, we would see time moving from the future to the past, but from the perspective of that universe, it would look like our time was moving backwards, not forwards, the researchers suggest.

"Time is not something that pre-exists," one of the physicists, Julian Barbour from the University of Oxford in the UK, told Olivia Goldhill at Quartz. "The direction and flow of time we have to deduce from what’s happening in the Universe. When we look at it that way, it’s natural to say that time begins at that central point and flows away in opposite directions."

Physicists have been struggling for decades over the fact that none of the fundamental laws of physics that govern the Universe state that time has to necessarily move forwards. "Whether through Newton’s gravitation, Maxwell’s electrodynamics, Einstein’s special and general relativity or quantum mechanics, all the equations that best describe our Universe work perfectly if time flows forward or backward," Lee Billings writes for Scientific American.

Back in 1927, a British astrophysicist Arthur Eddington proposed that there exists an 'arrow of time', which acts as a fundamental property of a branch of physics called thermodynamics.

The second law of thermodynamics states that in any isolated system - such as a universe - entropy (or disorder) has to increase, so regardless of whether the arrow of time is moving backwards or forwards, things must always march towards a higher state of entropy.

Our version of the Universe and its thermodynamic arrow of time it is that when the Big Bang occurred, our Universe began like a new, whole egg, with high order and low entropy. Soon enough, that 'egg' was broken and scrambled almost beyond recognition, and everything fell into a chaotic, high entropy state.
The problem with this assumption is that is doesn’t allow for the backwards movement of time that the fundamental laws of physics allow for. You can’t progress from a shattered egg back to a highly ordered, perfectly whole egg, so what gives?

"Zooming out to the entire Universe, we ... define the future as that direction of time in which entropy increases. By studying the motion of faraway galaxies, we can predict how the cosmos will evolve. Or we can rewind time back to the Big Bang, when the Universe must have had much less entropy.

Try to rewind further and we meet a cosmological conundrum. We can’t proceed if the Big Bang was indeed the beginning of time, but in that case, why did it have such low entropy? And if it wasn’t the beginning of time ... we’d still want to know how an eternal Universe could have reached such a low-entropy state that would allow for the arrow of time to form."

Julian Barbour and his colleagues in the UK published a paper back in 2014 arguing that this arrow of time is being governed by gravity, rather than thermodynamics. Publishing in Physical Review Letters, they describe how they ran a computer simulation of 1,000 particles that were all governed by Newtonian gravity - the most simplistic simulation of the Universe you could imagine.

They found that, thanks to gravity, the particles ended up with the smallest amount of distance between each other - which they called the Janus point. The particles would then expand back outwards in different directions, signifying how time could move forwards and backwards in an actual multiverse.

"When the particles then expand outwards, they do so in two different temporal directions," Goldhill writes for Quartz. "Barbour and his colleagues created a simplified 1,000 particle point model of the Universe showing this dual expansion, with gravity creating structure in both directions."

"It’s the simplest thing," Barbour says of his research. "You start at that central Janus point where the motion is chaotic - that’s like the Greek notion of primordial chaos - but then in both directions you get this structure forming. If the theory is right, then there’s another universe on the other side of the Big Bang in which the direction of experience of time is opposite to ours."

As described by Sokol at New Scientist, in this model, they created a finite cloud of particles, and dropped it into an infinite universe. Soon enough, two different arrows of time emerge spontaneously - half of them move towards increasing entropy, while the other half concregrate in the centre, decreasing entropy, before passing through and moving back outwards into chaos.

"Eventually the whole cloud is expanding, and entropy is rising in tandem," says Sokol.

Perhaps this middle region of low entropy describes the Big Bang, but also solves the problem of there being no "beginning of time" - just the lowest state of chaos.

Carroll and Guth have yet to publish the results of their model, and admit that there are lots of limitations that still need to be ironed out, but together with Barbour's team's work, it's safe to say that there's something else going on other than the "One Universe was created from the beginning of time" assumption. I guess Time Bat was right after all. 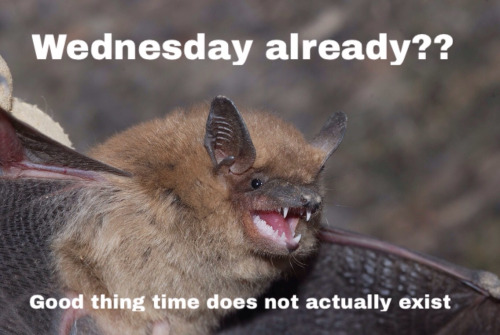