Physicists Finally Observe a Link Between Quantum Criticality And Entanglement

We know that the realm of quantum physics is science operating at a mind-bogglingly small scale, thus watching quantum interactions happen is always exciting. Now, physicists have managed to observe billions upon billions of entangled electrons passing through a metal film.

The film is a mix of ytterbium, rhodium and silicon, and is what's known as a 'strange metal', one that doesn't act as expected at very low temperatures.

"With strange metals, there is an unusual connection between electrical resistance and temperature," explained physicist Silke Bühler-Paschen from Vienna University of Technology in Austria.

"In contrast to simple metals such as copper or gold, this does not seem to be due to the thermal movement of the atoms, but to quantum fluctuations at the absolute zero temperature." 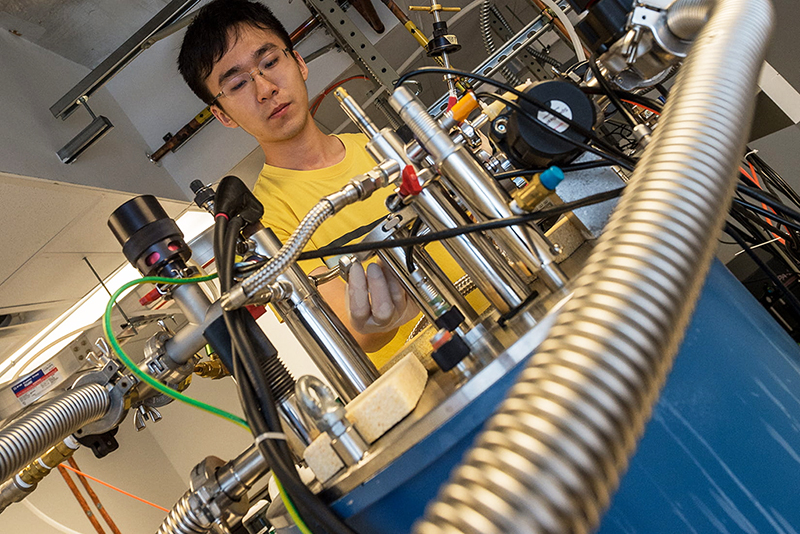 "When we think about quantum entanglement, we think about small things," says physicist Qimiao Si, from Rice University. "We don't associate it with macroscopic objects."

"But at a quantum critical point, things are so collective that we have this chance to see the effects of entanglement, even in a metallic film that contains billions of billions of quantum mechanical objects."

The experiments Bühler-Paschen, Si and colleagues ran were incredibly challenging from many levels – from the highly complex materials synthesis required to create the strange metal, to the delicate terahertz spectroscopy required to observe the electrons.

Ultimately, after a painstaking process, the team found what they were looking for: the tell-tale sign of quantum criticality known as frequency over temperature scaling.

"Conceptually, it was really a dream experiment," says Si. "Probe the charge sector at the magnetic quantum critical point to see whether it's critical, whether it has dynamical scaling."

"If you don't see anything that's collective, that's scaling, the critical point has to belong to some textbook type of description. But, if you see something singular, which in fact we did, then it is very direct and new evidence for the quantum entanglement nature of quantum criticality."

What all of this high-level physics means is a lot of potential: potential quantum advancements in computing, communications and more. Scientists have hypothesised about a link between quantum entanglement and quantum criticality before, but now it's been observed.

The study of quantum states is still in its very early stages, but it could hold the key to all kinds of weird science, like high-temperature superconductivity – which is also believed to be underpinned by quantum criticality.

Understanding how these quantum phases switch gives us a better chance of being able to control them in the future – and although that's still a long way off, it just got a little closer.

"Our findings suggest that the same underlying physics – quantum criticality – can lead to a platform for both quantum information and high-temperature superconductivity," says Si. "When one contemplates that possibility, one cannot help but marvel at the wonder of nature."