We just got some massive news in the ongoing drive to switch to renewable energy: scientists have identified 530,000 sites worldwide suitable for pumped-hydro energy storage, capable of storing more than enough energy to power the entire planet.

Pumped-hydro is one of the best technologies we have for storing intermittent renewable energy, such as solar power, which means these sites could act as giant batteries, helping to support cheap, fully renewable power grids.

As of now the sites have only been identified by an algorithm, so further on-the-ground research needs to be done. But it was previously assumed there were only limited suitable sites around the world, and that we wouldn't be able to store enough renewable energy for high-demand times – which this study shows isn't the case at all.

Added together, these hundreds of thousands of sites have the potential to store around 22 million Gigawatt-hours (GWh) of energy. It's more than enough to get the entire planet running on renewables, which is where we want to get to. "Only a small fraction of the 530,000 potential sites we've identified would be needed to support a 100 percent renewable global electricity system," says one of the researchers involved in the survey, Matthew Stocks from the Australian National University (ANU).

"We identified so many potential sites that much less than the best 1 percent will be required. The perception has been there are limited sites for pumped hydro around the world, but we have found hundreds of thousands."

The sites identified would rely mainly on solar photovoltaic (PV) and wind power to pump water uphill when the renewables are plentiful. When energy is needed, the water will be released and pulled down by gravity to drive turbines and generate electricity. No fossil fuels are released in this process. 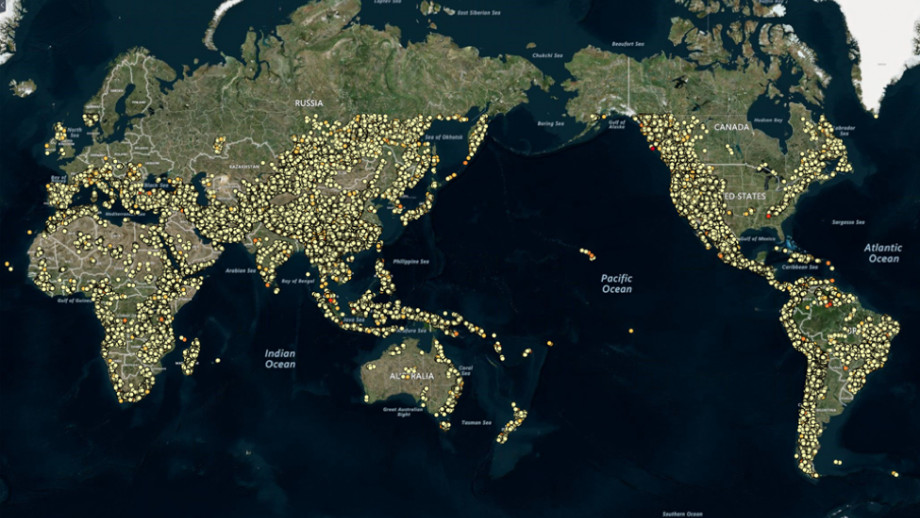 These short-term off-river pumped-hydro energy storage (STORES) sites were identified using a combination of algorithms run on geographical data – these algorithms mean large regions can be combed for potential sites much more quickly.

Locations with enough space, suitable terrain, and the right variations in elevation were highlighted by the algorithms.

The STORES sites identified would still need to be properly assessed in terms of the ownership of the land and any specific engineering or environmental challenges they might present. You can see a full map of the sites here.

A couple of years ago the same team identified 22,000 STORES sites in Australia. In this new study they've extended the analysis worldwide, while also tweaking the algorithms used to find sites with both upper and lower reservoir locations, and a potential route for a connecting tunnel.

The latest find has yet to be published, but the same algorithm was peer-reviewed and published last year.

With the adjusted algorithms, just 3,000 of the best Australian sites made the cut – so we're talking about 527,000 locations across the rest of the globe. With the right development, we could meet our renewable energy needs many times over.

The team has uploaded details of its work and maps showing the site locations on a dedicated website. None of the potential sites are located inside national parks or urban areas, and each one has the potential capacity to hold 2-150 GWh of energy.

What makes pumped-hydro energy storage so appealing is that it can be adapted as electricity demands change. Water stored in the reservoir can be discharged as and when it's needed – for example, when a lot of power is required or when solar and wind technology aren't generating enough electricity.

When demands are lower, water can be driven back uphill to the reservoir using excess electricity generated by wind and sunshine and stored for later.

No cooling water is required as it is in fossil fuel systems, which means the electricity demands of the plant itself are reduced, and of course there are no greenhouse gas emissions. Impact on the environment is kept down to a minimum because it doesn't involve any natural river systems.

The scientists say sites like the ones they've identified can operate at maximum power for between 5 and 25 hours. There's another benefit to this type of hydroelectric power system as well: it can start up quickly.

"Pumped-hydro energy storage can go from zero to full power extremely quickly – it takes only a few minutes," says one of the team, Andrew Blakers from ANU.

"Pumped hydro accounts for 97 percent of energy storage worldwide, has a typical lifetime of 50 years and is the lowest cost large-scale energy-storage technology available."

The team's earlier work on the Australian sites was published in the journal Applied Energy.