Scientists Are Surprised by What Great White Sharks Are Actually Eating

Knowing more about what sharks eat is crucial in managing how we interact with them, and a new study looking at the diet of great white sharks off the east Australian coast has revealed some surprising findings.

Based on a detailed analysis of shark stomach contents, these apex predators spend a lot more time than we thought feeding down at the bottom of the sea bed, rather than gliding along the top of the water, looking for prey.

Scientists looked at the digested meals of 40 juvenile great whites (Carcharodon carcharias), and discovered plenty of fish species known for living on the seafloor or hanging out buried in the sand down in the depths.

"The stereotype of a shark's dorsal fin above the surface as it hunts is probably not a very accurate picture," says ecologist Richard Grainger, from the University of Sydney.

"This evidence matches data we have from tagging white sharks that shows them spending a lot of time many metres below the surface."

Not only can the diet analysis tell researchers more about what great white sharks like to snack on, they also provide a window into the migratory habits of these creatures: where they're eating and why they might have to move around.

The rest of the stomach contents was made up of unidentified or less abundant groups of fish. Marine mammals, other sharks, squids and cuttlefish also occasionally form part of the diet of a juvenile great white shark, according to the researchers.

"This fits with a lot of other research we've done showing that wild animals, including predators, select diets precisely balanced to meet their nutrient needs," says ecologist David Raubenheimer, from the University of Sydney. 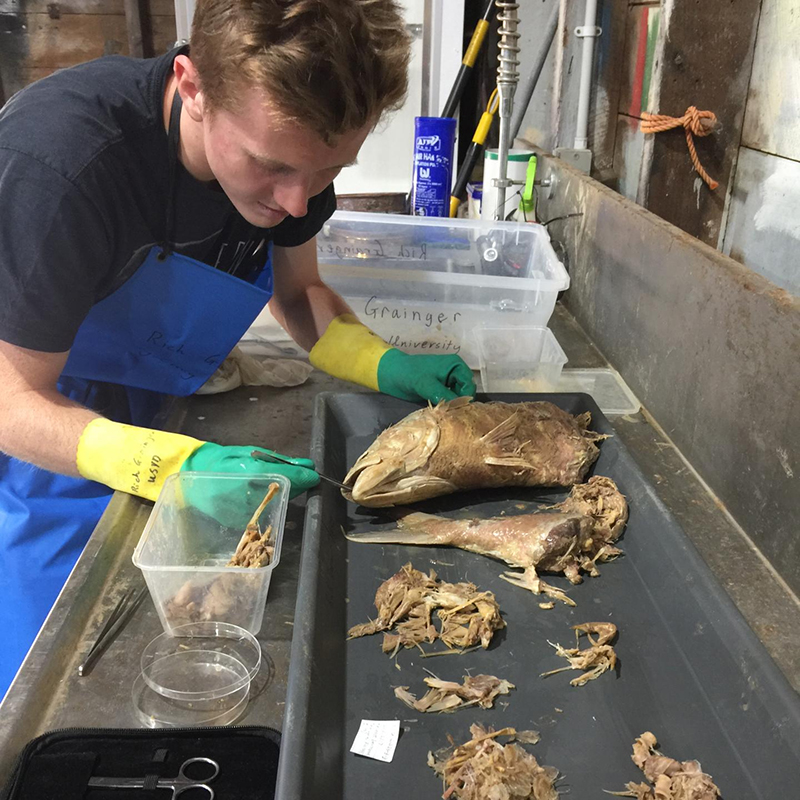 Study author Richard Grainger and the contents of a white shark's stomach. (University of Sydney)

The team compared their findings with other collected data to try and understand what kind of nutrients the sharks are looking for. That could in turn tell us more about where they like to live, and how human activity can interfere with that.

As sharks get older, they tend to move around more, for example – and take on board more fat in their diet to help power these journeys. Diet and migration are closely linked, and while these new data are based on a relatively small sample, it can be combined with movement records from great whites that have been electronically tagged.

The researchers are calling for more work to be done to analyse the exact nutritional composition of shark diets - not just the calorific content - in order to understand the relationship between their physiology, behaviour and ecology.

"Understanding the nutritional goals of these cryptic predators and how these relate to migration patterns will give insights into what drives human-shark conflict and how we can best protect this species," says ecologist Gabriel Machovsky-Capuska, from the University of Sydney.