Mars is well-known for its seasonal dust storms, which can sometimes grow to encompass the entire planet.

In June 2018, the dust storms became so severe that they obscured most of the planet's surface, causing NASA to lose contact with Opportunity, which eventually proved fatal to the record-breaking rover.

Understanding these storms and what causes them is critical to ensuring that solar-powered robotic missions continue to operate and future crewed missions can remain safe.

Specifically, scientists are looking for seasonal changes (i.e., changes in absorbed solar energy and temperature increases) that trigger dust storms and cause them to combine and grow.

In a recent study conducted by researchers from the University of Houston, they could result from seasonal energy imbalances in the amount of solar energy absorbed and released by the planet.

These findings could lead to a new understanding of the red planet's climate and atmosphere.

The research was led by Ellen Creecy, a Ph.D. student with the Department of Earth and Atmospheric Sciences (EAS) at the University of Houston, as part of her doctoral thesis.

She was joined by Dr. Xun Jiang and Dr. Liming Li (her thesis advisors at the EAS), as well as researchers from the NASA Goddard Space Flight Center, NASA's Jet Propulsion Laboratory, and the Universities Space Research Association (USRA) at the Lunar Planetary Institute (LPI). 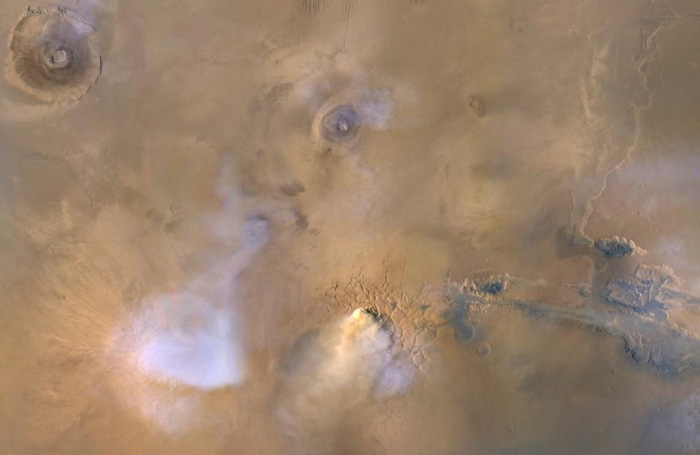 The term "radiant energy budget" refers to the amount of solar energy a planet absorbs from the Sun and radiates outward as heat. This is a fundamental metric for characterizing a planet's climate and meteorological cycles.

For the sake of their study, the team combined observations from multiple missions like the Mars Global Surveyor (MGS), the Curiosity rover, and the InSight lander.

This allowed them to model Mars' climate and estimate the amount of energy it emitted globally as a function of season, including periods with a global dust storm.

"One of the most interesting findings is that energy excess – more energy being absorbed than produced – could be one of the generating mechanisms of dust storms on Mars," said Creecy.

When the Hubble Space Telescope imaged Mars in June 2001 (left), the seeds of the storm were caught brewing in the giant Hellas Basin (oval at 4 o'clock position on disk) and in another storm at the northern polar cap.

The results revealed strong seasonal and daily variations in the amount of solar energy radiated by Mars.

Specifically, they found evidence of a strong energy imbalance of ~15.3 percent between Mars' seasons – compared to 0.4 percent on Earth. They further found that during the planet-encircling 2001 dust storm, the amount of power emitted globally decreased by 22 percent in the daytime but increased by 29 percent during nighttime.

As Dr. Germán Martínez, a USRA staff scientist at the Lunar and Planetary Institute (LPI) and a co-author of the paper, explained in a recent USRA press release:

"Our results showing strong energy imbalances suggest that current numerical models should be revisited, as these typically assume that Mars' radiant energy is balanced between Mars' seasons. Furthermore, our results highlight the connection between dust storms and energy imbalances, and thus can provide new insights into the generation of dust storms on Mars." 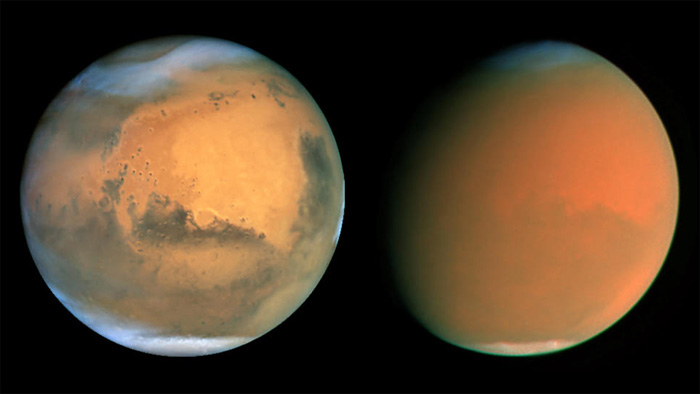 Above: On the left is Mars as Hubble imaged it in June 2001. On the right is Mars in September of the same year. The Martian surface is obscured by a dust storm that had already been raging across the planet for two months.

Combined with numerical models of Mars' climate, the team's results could improve our understanding of the Martian climate and atmospheric circulations. This will be especially important for future crewed missions to Mars, which NASA and China hope to mount in the coming decade.

The paper that describes their findings, "Mars' emitted energy and seasonal energy imbalance," recently appeared in the Proceedings of the National Academy of Sciences.