For the first time, scientists have demonstrated that they can detect radiation without having to get close to the source – as far as 1 kilometre away (0.62 miles).

Right now, the only way of testing if something is radioactive is to get a detector very close to it, which poses the risk of radiation exposure or, in the case of a potential nuclear 'dirty' bomb, at whole lot worse. Being able to detect nuclear materials from a safe distance could change how we clean up meltdowns and figure out how habitable places like Chernobyl are in the future.

Although the ability to detect radiation from a safe distance has been predicted for some time, this is the first time such capability has actually been demonstrated.

Using high power, pulsed electromagnetic (EM) waves from a device called a gyrotron, researchers ere able to sample the air surrounding an object to see if they can detect any radiation.

A key part of this technique is the generation of short-lived plasma at the point where the electromagnetic beam is focused.

"The experiment clearly shows that it is surely possible to extend the detection range up to 1 kilometre in the same frequency that we used," one of the team, Eunmi Choi from Ulsan National Institute of Science and Technology in South Korea, told ScienceAlert.

"Our experiment suggests that detecting the existence of radioactive material in long distance can be possible. Especially, a high radiation field where not only human beings but also robots cannot access, [such as] dirty bomb detection in the region of suspicious activity."

By creating an intense electromagnetic pulse and focusing it next to an object, the researchers were able to create a plasma. Then, by simply watching how the plasma behaved after it was formed, they could figure out if there were any radioactive particles nearby.

Plasma is the fourth form of matter, alongside solid, liquid and gas, and is formed when gas molecules are blasted with enough energy that they lose some electrons.

Plasmas are relatively common – they're formed in our Sun as it undergoes nuclear fusion, as well as in lightning strikes, and they are the reason the northern lights glow. 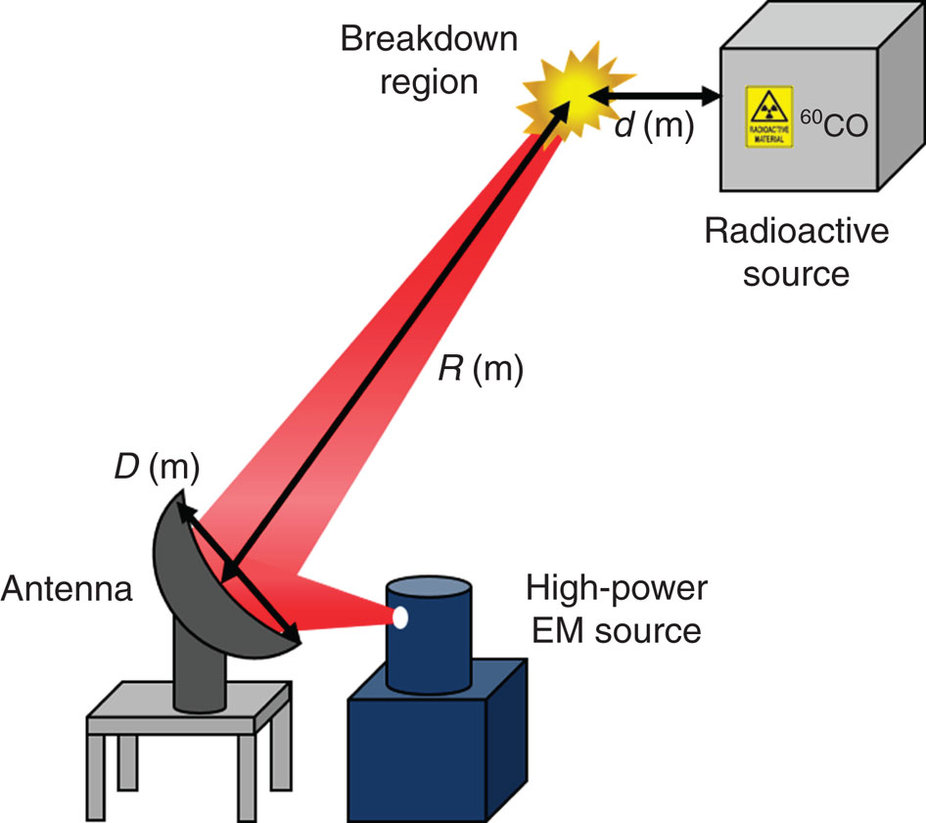 Schematic of a possible setup for the detection of radioactive material inside a container. Credit: Kim, D. et al./Nature Communications

By increasing the size of the antenna, used to focus the beam to create the plasma, and with low air turbulence the team says this method has the potential to detect radiation from a distance of 1 kilometre.

And they'ree not just saying that for effect, they did the calculations.

Choi is hopeful that the finding could also inform fundamental research into plasma physics, and make dealing with exposed nuclear materials a much safer exercise in the future.

"According to our experimental work, the required power for plasma breakdown is much below that theoretically predicted when the radioactive material is present," Choi told ScienceAlert, "which opens a new, interesting regime in gas discharge physics."

The research was published in Nature Materials.