Picture this: you turn on the news to hear an asteroid is on a collision course with Earth, and you have just a few hours to find a place to hide.

Going by case studies developed by researchers in the UK, the best use of your time is probably to write your own obituary using the words "killed by high winds", because for many of us, it looks like the enormous gust of wind from an apocalyptic asteroid will be what gets us - not the actual impact itself.

Researchers from the University of Southampton have calculated the number of human casualties that would result from three different impact scenarios: a meteor that blows up in the atmosphere (an air burst), a meteorite that hits the ground, and one that splashes into the ocean.

In every scenario, most of the deaths were determined to be the result of an intense wind gust causing hurricane-like devastation, rather than from incredible heat, falling rocks, or a wall of intense pressure.

Of course, the overall effect of an asteroid strike would depend on the size, composition, and relative speed of the rock hurtling towards our planet's surface.

It's also going to depend on a bunch of other factors, such as where the meteorite lands, and how exposed the population would be to the environment at the time of impact.

So the scientists crunched some numbers based on educated assumptions about population densities and cultural behaviours, using a global population of 7.3 billion people to determine that the average westerner is relatively unsheltered for about 3 hours each day, while those in other countries could be outside for about 6 hours.

They also based their calculations on rocky type of meteorites called chondrites, which make up about 90 percent of asteroids.

Stepping through the flow-chart below, the team calculated the results of various impacts according to each potential scenario: 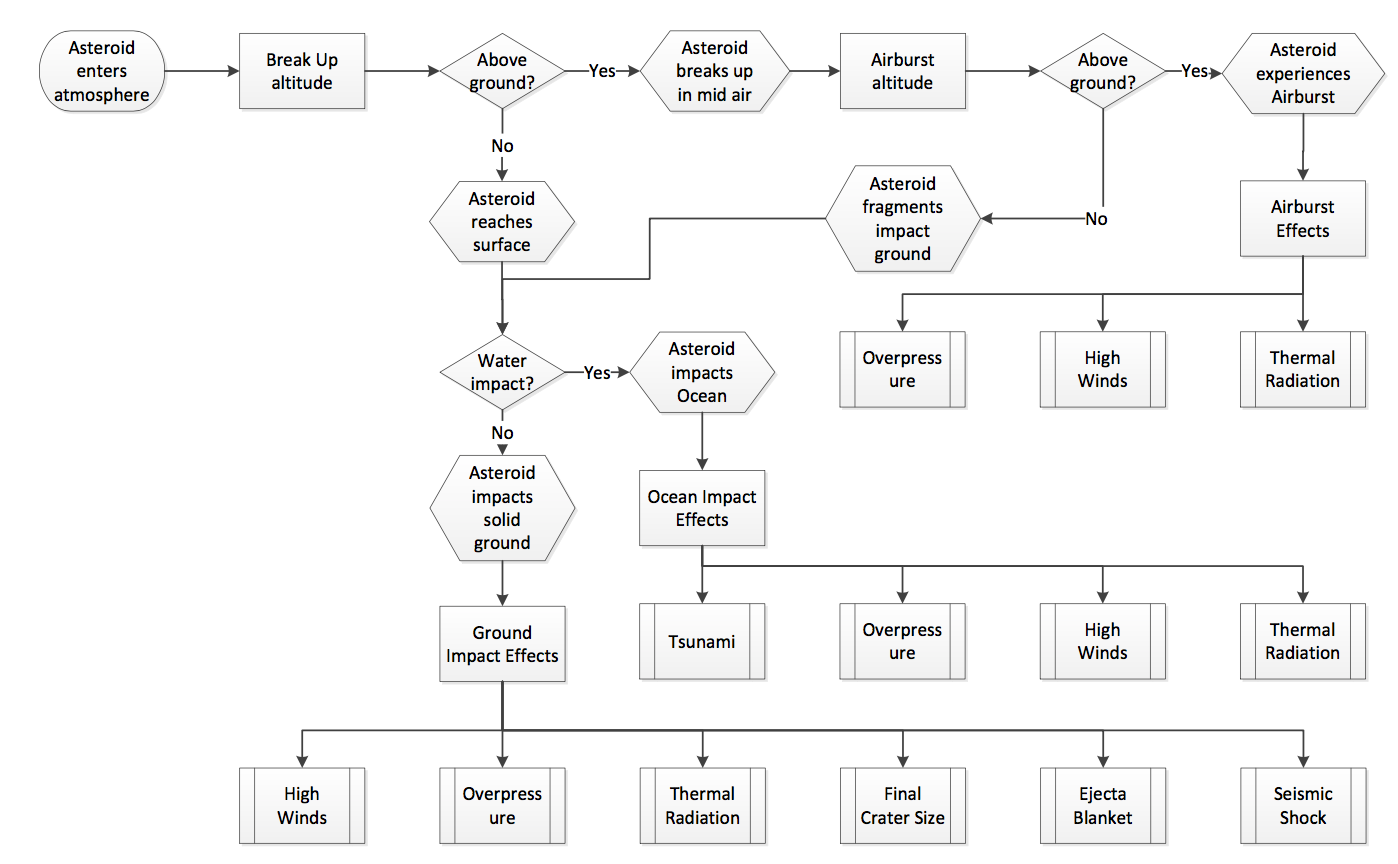 They then developed two of the scenarios into more detailed case studies to illustrate the effects of an asteroid hitting a populated area.

The first scenario compared a hypothetical object 50 metres (164 feet) wide exploding over both Berlin and London, in what's called an air burst, with a second object 200 metres (656 feet) wide forming a crater in those same cities.

The impact speed was calculated at 20km/s (12.4 miles per second), with an angle of entry at 45 degrees.

The results were pretty devastating; the total carnage from an asteroid air burst was calculated to be about 1.2 million deaths in Berlin, and just over 2.8 million dying in London.

If we're talking an impact crater in the middle of each city, though, we can triple the total mortality, with 3.5 million dying in Berlin and 8.8 million in London.

Regardless of which city you call home, or whether the object actually made it to the ground, most deaths would be the result of a pummelling by the tornado-like winds – about 85 percent would die as a result of being blown about outside, or inside a collapsed building following an airburst.

If the rock hit the ground, the resulting blast of wind would account for about half of all deaths.

If you're worried about being fried from the heat of the impact, a quarter of casualties would be the result of thermal effects surrounding the craters, with another quarter the direct result of the pressure shockwave.

Being squashed by rocks is barely worth worrying about, with only around 2 to 3 percent of deaths caused by ejecta from the crater.

The second scenario explored dropping a similar 200 metre (656 foot) wide asteroid on top of Rio de Janeiro in Brazil, and then at a high rate of knots at various distances off the coast.

As previous studies have indicated, having an asteroid splash down into the ocean doesn't end well, given the devastation the resulting tsunami can cause.

But it isn't all doom and gloom, at least for cities like Rio – the slope of the land offshore acts as something of a buffer for the approaching wave.

As might be expected, the further away the asteroid strikes, the fewer the total casualties.

But once again, the wind was responsible for the greatest loss of lives – of the 29,998 Brazilians expected to die in the event of a meteorite hitting 100 kilometres (62 miles) out to sea, 92 percent could blame the wind, with the rest dying when the wave hits.

If the rock hits the water a little closer, such as just 10 km (6.2 miles) away, of the 1.4 million projected deaths, nearly 60 percent would be from wind damage, and just over a third from the heat blast.

But before you invest in a bomb shelter and buy a tank for your daily commute, keep in mind that asteroids of this size are expected to hit Earth about once every 40,000 years, with just a 0.01 percent chance that we'll see one in the next century.

Even then, it's unlikely it'll hit close to your home, but who's even worried about impacts now that we have killer winds to fret about?

"Chances are that an asteroid hits the water, and even if it hits land, it's much more likely that it will hit away from populated regions," team member Clemens Rumpf told Leah Crane at New Scientist. "These are very rare events, but with potentially high consequences."

Let's just hope we don't need to see how accurate their models are any time soon, because in the unlikely event of an asteroid strike, we're seriously not ready.

The study is due to be published in an upcoming edition of Meteoritics and Planetary Science, but if apocalyptic thrillers are your cup of tea before bed, it's available now on the pre-publishing website arXiv.org.