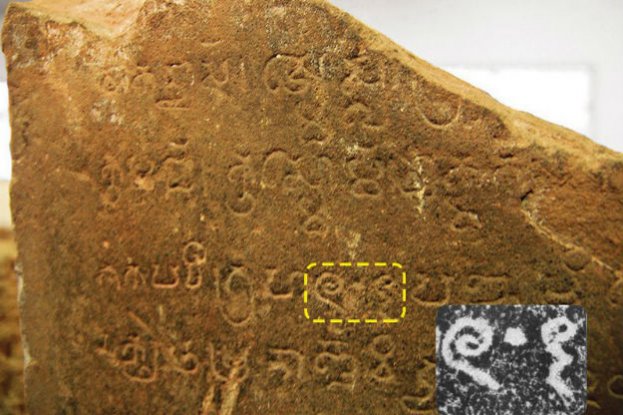 US-based mathematician, Amir Aczel, made it his life’s work to find the world’s first zero. Having already discovered the first magic square inscribed on the doorway of a 10th-century Indian temple, this ‘mathematical archaeologist’ had come to know of K-127 - a stone stele first documented in 1931 that clearly held the inscription “605”. Dated to AD 683, it’s the oldest known representation of zero - a numeral that Aczel describes as the most significant of them all.

"Zero is not only a concept of nothingness, which allows us to do arithmetic well and to algebraically define negative numbers, but it is also an important place-holding device. In that role, zero enables our base-10 number system to work, so that the same 10 numerals can be used over and over again, at different positions in a number. This is exactly what makes our number system so efficient and powerful. Without that little zero we would be stuck in the Middle Ages!"

Until fairly recently, anthropologists believed that the Western number system took hold as late as the 13th century, when Italian mathematician Leonardo of Pisa (or Fibonacci) had taken what he’s learned from Arab traders and introduced it to the Europeans. Before then, the zero-less Roman system had been the standard. "With the exception of the Mayan system, whose zero glyph never left the Americas, ours is the only one known to have a numeral for zero,” Aczel writes for the Smithsonian Magazine. "Babylonians had a mark for nothingness, say some accounts, but treated it primarily as punctuation. Romans and Egyptians had no such numeral either.”

It was thought that the Arabic nations had themselves borrowed that number system from ancient civilisations on the Indian subcontinent, because of the discovery of a 9th-century zero inscribed in the Chatur-bujha temple in the city of Gwalior in India.

But then in 1931, French archaeologist Georges Cœdès insisted that zero actually came from the east - quite possibly Cambodia - having discovered an even older representation of the numeral on artefact K-127, found in the ruins of a 7th-century temple in the Mekong region.

At The Huffington Post, Aczel states that Cœdès, an expert in the Old Khmer language, translated the first use of zero - "Chaka parigraha 605 pankami roc…” to mean “The Chaka era has reached 605 on the fifth day of the waning moon…”. The '6' here appears as an inverted '9', which is how six was written in Old Khmer.

During the 1960s and 70s, when Pol Pot’s violent Khmer Rouge army tore through Cambodia, destroying thousands of priceless and ancient artefacts along the way, K-127 disappeared from the Cambodian National Museum in Phnom Penh. After years of research in an effort to track it down, Aczel rediscovered it among thousands of artefacts in a large shed in Siem Reap - the location of Angkor Wat - that had been maintained by the Angkor Conservation group.

Having written about his discovery in the earliest zero in his forthcoming book, Finding Zero, Aczel reports that he’s now working with the Cambodian government to move K-127 to a museum in Phnom Penh, where the public will be able to see this significant piece of numeric history for themselves.