Geologists have measured a devastating 'four-leaf clover' pattern of earthquake shockwaves in greater detail than ever before – and the resulting findings could be crucial in making our buildings and cities more resistant to large quakes in the future.

This four-pronged pattern has been analyzed before, but never in as much depth as this. The team behind the new study is hoping that it might remove some of the mystery surrounding how earthquake shockwaves spread out across different frequencies.

Crucially, the cloverleaf shockwaves spread at low frequencies of under 10 hertz, a level of vibration that many buildings and structures are particularly vulnerable to. 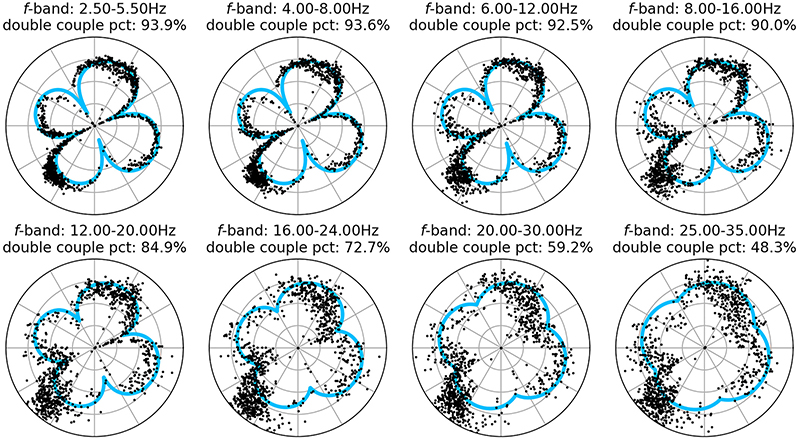 "We find that at low frequencies, a simplified and widely used four-lobed model of earthquake ground motions does a good job describing the observed seismic wavefield," write the researchers in their published paper.

"At higher frequencies, however, this four-lobed radiation pattern becomes less clear, deteriorating due to complexity in earthquake source processes and fault zone structure."

The researchers looked at data from one of the densest seismic arrays on the planet: the LArge-n Seismic Survey in Oklahoma (LASSO), which is made up of 1,829 seismic sensors within an area of just 15 by 20 miles (25 by 32 kilometers).

LASSO was used to measure P-wave data from 24 small earthquakes across a period of 28 days in 2016, and it's this data that the new study digs into. Having sensors so close to the epicenter of the quakes meant that patterns could be spotted before they smoothed out and evened off over greater distances.

By using algorithms to filter shockwaves by frequency, the four-leaf clover pattern emerged, but only at the lower frequencies. That might be because lower frequency seismic waves can bypass the jumble of broken rock found at earthquake faults, rather than being reflected and scattered in many different directions.

"What happens when you have an earthquake is that pieces of broken rock inside the fault zone start to move around like pinballs," says geophysicist Victor Tsai, from Brown University in Rhode Island.

The earthquakes recorded by the LASSO array were relatively small – barely perceptible to the sensors – but the same patterns should be repeated across stronger quakes, the researchers predict. The next step is to put that to the test.

Ultimately, new data like this can make earthquake assessments and modeling more accurate. It shows that while people on the ground might experience a consistent level of shockwaves (the higher frequency ones), the buildings around them might be under a greater or lesser level of stress (the lower frequency shockwaves), depending on where they are in the four-leaf clover pattern.

While earthquake faults vary in terms of their age, their geological composition, and other factors, the underlying physics should be the same. The scientists are hoping to put together a catalog of earthquake zones, showing the faults with the most potential for dangerous seismic waves and resulting damage.

"What's important in these results is that close to the source we're seeing a variation in ground motion, and that's not accounted for in any sort of hazard model," says the study's first author, earthquake geophysicist Daniel Trugman from the University of Texas at Austin.