According to media reports, at least 12 people have been killed in selfie-related incidents so far in 2015 and many more injured, while only eight have died as a result of shark attacks.

The latest selfie-related death was of a 66-year-old Japanese tourist, who reportedly suffered a heart attack while posing with a selfie stick at the Taj Mahal in India last week. Other deaths have been caused by distracted photo-takers falling off cliffs, crashing their cars, being hit by trains, and even shooting themselves while posing with guns.

In fact, the selfie craze has proven so dangerous that officials in Australia had to fence off a 16-storey high rock that looks like a wedding cake because people wouldn't stop taking photos on it, despite fears it could collapse at any time.

Russia has also experienced its share of accidents: two men in the Urals were killed while taking a selfie of themselves holding a hand grenade with the pin pulled out (the photo survived as proof), and a teenager died in May while climbing onto a railway bridge to take a photo.

The incidents have caused the Russian government to launch a campaign to warn people about the dangers of selfies, which included the following poster: 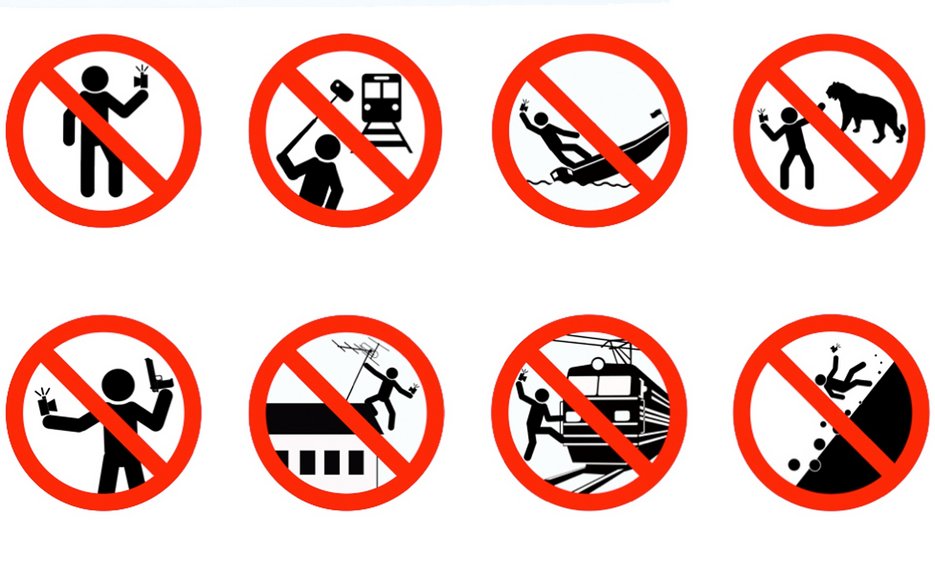 Russian Ministry of the Interior

So what is it that makes selfie-takers so likely to put themselves in danger? Research published by Ohio State University last year found that men who post a lot of selfies score higher in traits of narcissism and psychopathy in online tests. While all the participants were still in the healthy range, this suggests that they may be more inclined to focus on personal gain in situations, rather than potential danger.

"It's all about me. It's putting me in the frame. I'm getting attention and when I post that to social media, I'm getting the confirmation that I need from other people that I'm awesome," lead researcher Jesse Fox told Reuters. "You don't care about the tourist attraction you're destroying; you don't care about annoying people in your social media feed ... you're not even thinking about the consequences of your actions, so who cares if you're dangling off the side of the Eiffel Tower?"

And, yes, we know this news isn’t strictly science. But it's an important and timely reminder that sharks aren’t the murderous beasts that the Discovery Channel’s Shark Week has made them out to be.

So how do the shark attack numbers stack up? According to the Global Shark Attack File, there have been 74 unprovoked shark attacks this year. Only eight incidents have resulted in death.

We're not suggesting that people don't need to be careful and aware of shark attack risks when entering the water. But not only does the likelihood of being killed by a shark pale in comparison to the deadliness of selfies, it’s also a lot lower than the number of deaths caused by dog attacks and home renovations. In fact, pretty much everything you do today (particularly if it involves a car) is more likely to kill you than a shark.

Of course, it's hard not to be afraid of giant fish with teeth, but we need to keep the facts in mind so that we can make rational decisions about things like shark culls, which have no scientific backing.

Instead, maybe we should try to put a ban on the phrase "pics or it didn't happen". Because, statistically speaking, that sh*t is way more dangerous than a great white.