Sharks are pretty eclectic eaters. They'll go for prey ranging from fish and invertebrates to sea mammals and turtles. A shark may even have a chomp on the odd surfer. If they can catch it, or scavenge it, and it's made of meat, sharks will generally eat it.

A new study identifying the contents of the bellies of baby tiger sharks (Galeocerdo cuvier) using DNA analysis has found a dietary component no one expected, though: land-based songbirds.

Yes, like the ones you see in your backyard, such as doves, sparrows and meadowlarks.

"Tiger sharks will see an easy meal and snatch it up, but I was surprised to learn that the sharks were eating songbirds - I assumed that they'd be seabirds," said biologist Kevin Feldheim of the Chicago Field Museum.

"It was one of the coolest projects I've been associated with using DNA to tell a story."

It all started after a small tiger shark off the Mississippi-Alabama coast coughed up some land-bird feathers - from a brown thrasher (Toxostoma rufum) during a shark population monitoring survey in 2010.

This was a surprise, so a team of researchers from Mississippi State University decided to investigate further. Just how common was it? The easiest way to figure out what an animal likes to eat is to have a look at what is being digested in its belly, so that's what the team did.

Thereafter, during monthly surveys between 2010 and 2018, they kept an eye out for other strange shark stomach contents. They would haul the sharks onto the boat, pump their stomachs, and let the sharks go again. What a job, hey. But they managed to collect the stomach contents from 105 tiger sharks in that time. 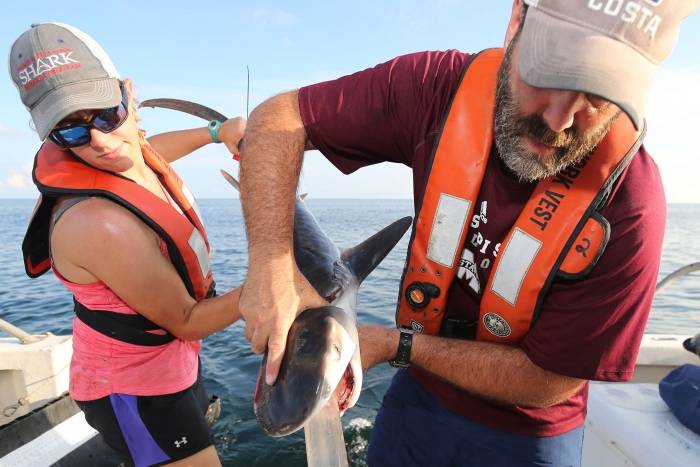 How to get a shark to spew. (Marcus Drymon)

Sure enough, there in the stomachs of 41 of those sharks were a whole bunch of partially digested songbirds. These were found every year during the study period when the team collected stomach contents.

This is also where the DNA part comes in, because it can be pretty hard to identify a bird when only half of it remains, and it's covered in shark bile.

The bird samples were sent to the Field Museum, where their DNA was sequenced and matched against a DNA database. The results were fascinating.

"None of them were seagulls, pelicans, cormorants, or any kind of marine bird," said marine fisheries ecologist Marcus Drymon of Mississippi State University. "They were all terrestrial birds."

Well, not identified, anyway. They only made conclusive positive identifications of 11 species of birds. These were eight passerine songbirds, two near passerine land birds and one waterbird (freshwater, not marine).

So how they heck were the sharks getting these land birds? Well, a big clue was in when they were turning up in the sharks' stomachs.

Remember how the surveys were monthly? The researchers were able to define a peak bird season for the sharks, which coincided remarkably well with the time of year the birds would be migrating near where the sharks live.

Any stragglers that fall into the water are easy pickings.

"The tiger sharks scavenge on songbirds that have trouble flying over the ocean," Feldheim said. "During migration, they're already worn out, and then they get tired or fall into the ocean during a storm."

Meanwhile, because seabirds already dwell near the ocean waters, perhaps they're better able to handle falling into the sea than a land bird, in turn making them less easy to prey on.

The study is a sobering demonstration of the complex dynamics at play in the natural world and of how much we still don't know, not to mention that even changing small things could have repercussions we can't even begin to consider.

Which could explain why so many shark populations, after swimming the ocean for hundreds of millions of years, are now perilously close to the brink of extinction.

The research has been published in Ecology.