Tens of million years ago, sand tiger sharks hunted in the waters off the Antarctic Peninsula, gliding over a thriving marine ecosystem on the seafloor below.

All that remains of them today is their sharp pointed teeth, but those teeth tell a story.

They're helping solve the mystery of why the Earth, some 50 million years ago, began shifting from a "greenhouse" climate that was warmer than today toward cooler "icehouse" conditions.

Many theories about this climate shift focus on Antarctica. There is geologic evidence that both the Drake Passage, which is the water between South America and the Antarctic Peninsula, and the Tasman Gateway, between Australia and East Antarctica, widened and deepened during this time as Earth's tectonic plates moved. 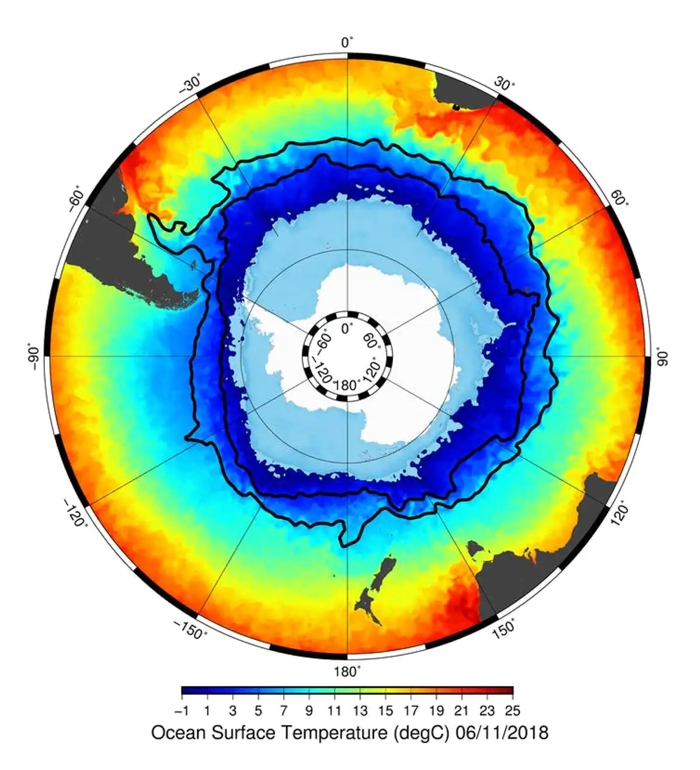 Above: A map of the ocean surface temperature as measured by satellites shows the Antarctic Circumpolar Current, marked by dark lines. Antarctica's sea ice appears in light blue.

The wider, deeper passages would have been necessary for the waters of the major oceans to come together and the Antarctic Circumpolar Current to form. That current, which flows around Antarctica today, traps cold waters in the Southern Ocean, keeping Antarctica cold and frozen.

The now-extinct sand tiger shark species Striatolamia macrota was once a constant in the waters around the Antarctic Peninsula, and it left exquisitely preserved fossil teeth on what is now Seymour Island near the tip of the peninsula.

By studying the chemistry preserved in these shark teeth, my colleagues and I found evidence of when the Drake Passage opened, which allowed the waters of the Pacific and Atlantic oceans to mix, and what the water felt like at the time.

The temperatures recorded in shark teeth are some of the warmest for Antarctic waters and verify climate simulations with high atmospheric carbon dioxide concentrations.

Sand tiger sharks have sharp teeth that protrude from their jaw to grasp prey. A single shark has hundreds of teeth in multiple rows. Over a lifetime, it sheds thousands of teeth as new ones grow.

Important environmental information is encoded within the chemistry of each tooth and preserved there over millions of years.

For example, the outer layer of a shark's tooth is composed of an enameloid hydroxyapatite, similar to enamel in human teeth. It contains oxygen atoms from the water the shark lived in. By analyzing the oxygen, we can determine the temperature and salinity of the surrounding water during the shark's life.

The teeth from Seymour Island show that the Antarctic waters – at least where the sharks lived – stayed warmer longer than scientists had estimated.

Another clue comes from the element neodymium, which adsorbs and replaces other elements in the outer enameloid of the tooth during early fossilization.

Each ocean basin has a distinct ratio of two different neodymium isotopes based on the age of its rocks. Looking at the ratio in the shark teeth allows us to detect the sources of the water where the shark died.

We studied 400 teeth from Seymour Island, from all ages of shark, juvenile to adult, from individuals living between 45 million to 37 million years ago. The combination of tooth size and chemistry yielded some surprising clues to the past.

Some of the teeth were extremely large, suggesting these ancient Antarctic sand tigers were larger than today's sand tiger shark, Carcharias taurus, which can grow to about 10 feet long. 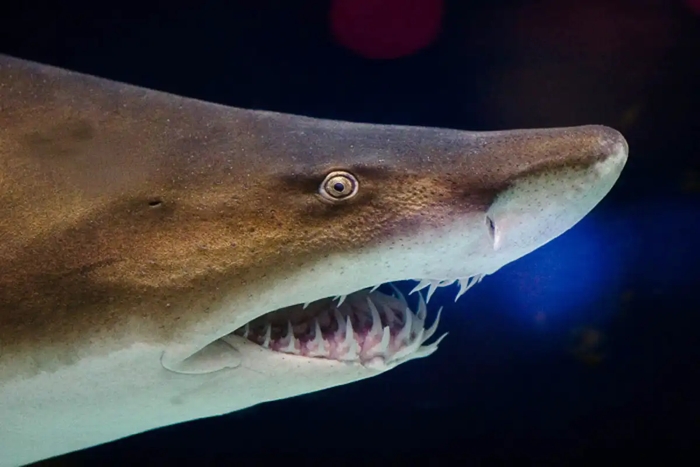 Above: A modern sand tiger shark, also known as a grey nurse shark, shows its rows of teeth.

In addition, water temperatures the sharks lived in were warmer than previous studies involving Antarctic clam shells suggested. It's possible the difference was between waters closer to the surface and deeper on the sea floor, or the sharks whose teeth we found may have spent part of their lives in South America.

Today's sand tiger sharks track warm waters. They spend summer and early fall between coastal Massachusetts and Delaware, but when waters cool off, they migrate to coastal North Carolina and Florida. Because their teeth continuously form and move forward almost like a conveyor belt, there are some teeth within the jaw that represent a different habitat than where a shark is living.

It is possible that the ancient sand tiger sharks also migrated, and when Antarctic waters cooled off, they headed north to warmer waters at lower latitudes.

The teeth suggested that the sharks' water temperature then was similar to the water temperatures where modern sand tiger sharks can be found today. Carbon dioxide concentrations were also three to six times higher than today, so scientists would expect amplified temperatures in the regions.

Finally, the neodymium in the fossil sand tiger shark teeth provides the earliest chemical evidence of water flowing through the Drake Passage that aligns with tectonic evidence. The early timing of the Drake Passage opening, but the delayed cooling effect, indicates there are complex interactions between Earth's systems that affect climate change.

What about their northern cousins?

Sand tiger sharks were found around the world during the Eocene, suggesting they survived in a wide range of environments. In the Arctic Ocean, for example, they lived in brackish waters that are less salty than the open ocean 53 million to 38 million years ago and were much smaller than their southern cousins off Antarctica.

Differences in the saltiness of the tiger sharks' habitat and size of the sharks also show up in the Gulf of Mexico during this time. That range of environmental tolerance bodes well for the modern sand tiger sharks' survival as the planet warms once again.

Unfortunately, the pace of warming today is faster and may be beyond the sand tiger shark's ability to adapt.