First recorded during the 1940s, a fallstreak hole forms when water droplets in a cloud freeze into ice crystals and refract light to form a rainbow, while at the same time dropping down below the cloud layer to form a hole.

These unique formations - also known as 'holepunch clouds' - can materialise on their own, but researchers have found that aircraft flying through super-cooled clouds can also set off the freezing process. This is because when air flows around the tips of an aeroplane's propellor and over its wings, it can cool in a localised area, causing the surrounding water droplets to drop to temperatures as low as -40 degrees and freeze.

"A fallstreak hole is a circular or elliptical gap that can appear in high- to mid-level clouds," US-based meteorologist Linda Lam told Weather.com. "There are water droplets in the cloud that have yet to freeze, and once they do - when ice crystals are introduced - the water droplet freezes and grows. As it grows, it begins to fall and a hole is left behind."

While the process of fallstreak hole cloud formation is entirely natural, it mimics the formation of jet contrails - no, not chemtrails! - which are the long, thin trails of clouds sometimes produces by an aircraft.

People in Victoria have shared their photos of the phenomenon with ABC News, which you can view at their website. 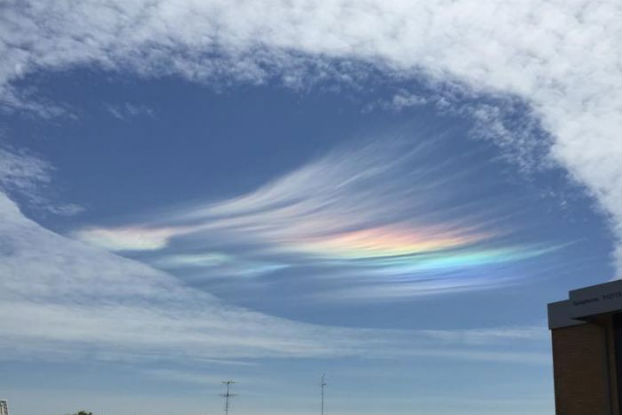