Volcanic lightning during an eruption of the Sakurajima volcano. (Mike Lyvers/Moment/Getty Images)
PHYSICS

Muons are everywhere. Unbeknownst to you, several hundred strike your head every second.

These subatomic particles – created when cosmic rays enter the Earth's atmosphere – are harmless and quickly decay into clusters of lighter particles.

The particles penetrate objects like X-rays do, which make them useful to scientists, who used muons to uncover a hidden chamber in Egypt's Great Pyramid four years ago.

Scientists also use ghostly muons to map the internal structure of volcanoes, which could one day help predict dangerous eruptions, according to an article published last week in the Proceedings of the Royal Society.

To create those maps, scientists measure how efficiently particles pass through magma flowing through caverns, chambers, and rocky passages in volcanoes, then use that information to create geological blueprints, according to Giovanni Leone, a geophysicist at the University of Atacama in Chile and lead author of the study.

The technique, known as muography, may one day be the "ultimate detection system for magma," Leone told The New York Times, adding that the technique makes it possible to track magma movements that may precede an eruption.

X-raying the inside of a volcano

Muons are like fat, fast electrons: They have a negative charge, but are 207 times heavier than electrons, traveling at nearly the speed of light. That heaviness and speed allows particles to penetrate dense materials like volcanic rock. The denser the object, the more quickly muons lose speed and decay.

Many muons can hit the side of a volcano and travel right through. But if the volcano is dense enough – say, because a passage is filled with magma – a muon won't make it out the volcano's other side.

To spot which muons survived the journey, scientists set up muon detectors on the flanks of a volcano. Those detectors create an image of the volcano's guts by capturing the intrepid muons that didn't decay while passing through the volcano, and noting gaps where muons didn't survive intact.

Some researchers do this mapping from the air by positioning muon detectors inside helicopters and flying near the volcano's flanks.

But because your leg bones absorb some of the X-rays as they pass through, less radiation makes it to the camera, meaning your bones appear lighter in the image.

In volcanic muography, scientists look for the same contrast: Muons that pass through completely cast dark shadows on the muon detector. But when muons hit dense parts of the volcano and decay more quickly, they leave lighter silhouettes. In short, the denser the object, the lighter the silhouette. 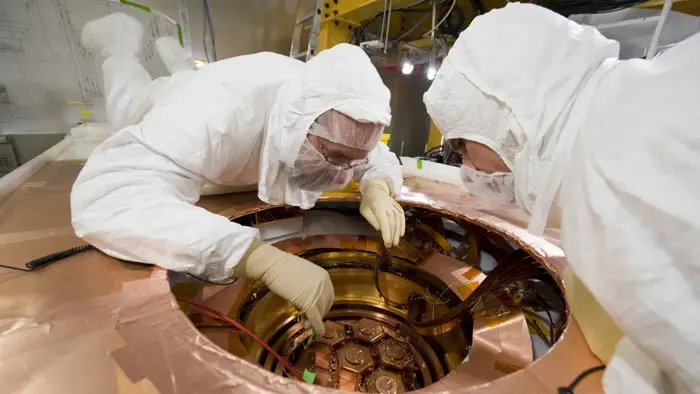 Above: Two scientists at the Fermilab in Batavia, Illinois, working on a muon detector.

The more muon detectors surrounding a volcano – some can be almost as large as a tennis court – the better the image.

One detector yields a 2D image, according to David Mahon, a muography researcher at the University of Glasgow, who was not involved with the study.

"By using multiple detectors positioned around the object, it's possible to build up a crude 3D image," he told The New York Times.

Researchers have used muography to glimpse inside Japan's Sakurajima and Mount Asama volcanoes, as well as three volcanoes in Italy – including Vesuvius – and a Caribbean volcano in Guadeloupe.

Beyond helping scientists map volcanic innards, the new article suggests muography could be used to spot magma reservoirs inside volcanoes that are primed to erupt and to track magma movement in real time.

Eruptions are often preceded by magma rising toward the volcano's summit, and using muons to detect magma flow in that summit area may help scientists detect impending eruptions – allowing people to safely evacuate ahead of an eruption.

"Knowing these issues as early as possible buys critically important time for those responsible for the local alarm and evacuation protocols," the study authors wrote, adding, "forecasting violent volcanic eruptions is the Holy Grail for applied volcanology."