The Blood Stains on The Shroud of Turin Seem Totally Fake, Study Claims

A blood pattern analysis of the Shroud of Turin has revealed that there's just absolutely no way the stains could have been made by a body laying flat on the fabric.

A pair of researchers have found that the blood-like splotches on the linen cloth are inconsistent with each other - some can only have occurred by a person standing upright, while another is completely unrealistic.

The famous length of fabric, which bears the image of a man, has long been thought to be the cloth that once wrapped the body of Christian figurehead Jesus of Nazareth. The imprint is said to have been transferred during the three days his body was interred.

Scientific analysis has not yet yielded an answer as to how the image was created on the fabric, but several reddish stains consistent with the reported crucifixion wounds of Jesus of Nazareth contain iron oxide - which could be from pigment, or could be from blood.

However, radiocarbon techniques have dated the shroud to between 1260 and 1390 CE.

The weave and the fabricweave and the fabric are both consistent with the Jesus of Nazareth time frame, as well as the Middle Ages; analysis of the cloth shows inconclusive evidence for pigment; and research determining a Middle Eastern provenance for pollen found on the cloth was later disavowed by one of its authors.

Radiocarbon dating notwithstanding, it would be fascinating to know exactly how the shroud was made; and, if it's real, it could reveal new information about crucifixion techniques. Because evidence for the shroud's authenticity has been so inconclusive, there has been recent scientific interest in using forensic techniques to investigate it.

This is where forensic anthropologist Matteo Borrini of Liverpool John Moores University in the UK and organic chemist Luigi Garlaschelli of the Italian Committee for the Investigation of Claims of the Pseudosciences enter the picture.

Rather than testing the substance itself, the researchers used a live subject and a mannequin to analyse the blood flow on wounds on the left hand, the forearms, the "lance wound" in the torso, and blood stains around the figure's waist.

The technique is called Bloodstain Pattern Analysis; for this, they used two types of blood: human blood donated for the research, and synthetic blood with the same fluid properties.

The researchers studied the flow for different positions: on the back of the hand in contact with wood, to observe the pattern left on the hand; on the left forearm, with blood trickling from the hand, in a standing position, and again in a supine (lying on the back) position with the hand covering the groin, as seen on the shroud.

They also investigated the short trickles on the back of the left hand; and the blood over the spear wound, as well as the lumbar region, thought to be blood flow from that wound.

The wood test was inconclusive, but the blood flow tests show that the shroud is a mess.

For starters, the trickles on the back of the hand and the flow along the arm occurred at two completely different angles.

The trickles from the hand as seen on the shroud occurred in the tests with the arms at a 45 degree angle, but that just doesn't work for the supposed position of the body.

"The angle between the arm and the body must be greater than 80° and smaller than 100° in order for the rivulets to flow from the wrist toward the elbow on the outer part of the forearm, as it appears on the Shroud," the researchers wrote in their paper. 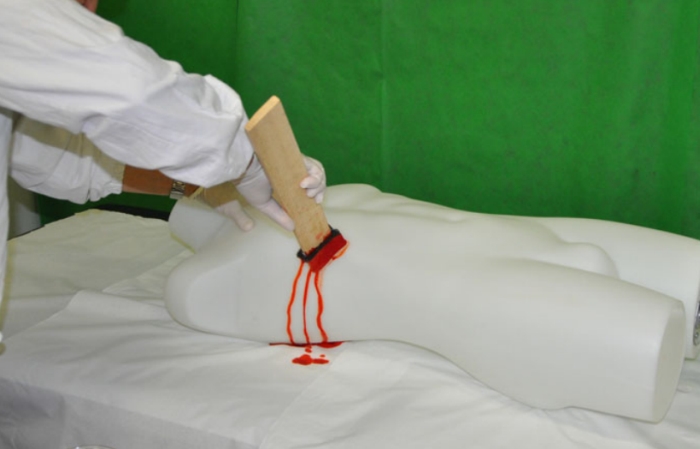 The spear wound bled in a direction consistent with the Shroud image when the test subject was upright, as would occur if the victim were pierced while hanging crucified, but with one key difference: it formed rivulets, rather than a solidly filled stain.

As for the lower back stain, the scientists could not replicate it at all.

They attempted it with both bleeding from a supine position, as well as a test subject that had been standing and then laid on its back, and nothing managed to produce a "blood belt" in the lower back.

"Assuming that the red stains on the Turin linen are actually blood from the crucifixion wounds, the results of the experiments demonstrate that the alleged flowing patterns from different areas of the body are not consistent with each other.

"Even supposing possible different episodes of bleeding (e.g., movements of the body, postmortem bleeding), these are not only non-documented, but also, as for the lumbar stains, they appear to be unrealistic," the researchers wrote.

"The inconsistencies identified by the authors seem not only to point against their own reality, but against the authenticity of the Shroud itself, suggesting that the Turin linen was an artistic or 'didactic' representation from the XIV century."

That doesn't mean the show is entirely over yet: until scientists are able to figure out exactly how the image was formed on the fabric, it's going to remain a tantalising scientific mystery.

Their findings have been published in the Journal of Forensic Sciences.