Scientists have discovered a simple, low-cost method for boosting the strength of Wi-Fi signals inside your home, and it relies on a household staple almost everybody keeps on hand in their kitchen: aluminium foil.

By using a reflector shield of aluminium foil as a 'virtual wall' positioned behind your Wi-Fi router, the team says it's possible to help shape the flow of indoor wireless signals, potentially giving your home network greater coverage and speeds.

"Through this single solution, we address a number of challenges that plague wireless users," says computer scientist Xia Zhou from Dartmouth College in Hanover, New Hampshire.

"Not only do we strengthen wireless signals, we make those same signals more secure."

Inspired by a DIY hack where people use aluminium soft-drink cans to try to boost their Wi-Fi, the researchers wanted to investigate if there was a way of using the same idea to more optimally direct wireless signals from a router.

While there's definitely anecdotal evidence that using the aluminium from an empty drink can can help boost your Wi-Fi, the shortcoming of the technique is that you end up with a curved, generic panel as your reflector.

Since the layout of everybody's home is different, just putting up a can shaped like a kind of radar dish and hoping for the best isn't very scientific - it doesn't give you much control over where the aluminium directs the wireless signals.

To improve upon the idea, Zhou's team came up with what it calls WiPrint: a system that analyses the internal layout of your home, mapping portions of it where you'd like to see your Wi-Fi signal boosted, along with specifying areas where you don't really need a strong connection.

With those inputs, WiPrint's algorithm is able to calculate the optimised shape for a signal reflector to place beside your Wi-Fi router, which can then be 3D-printed in plastic, and covered in aluminium foil. 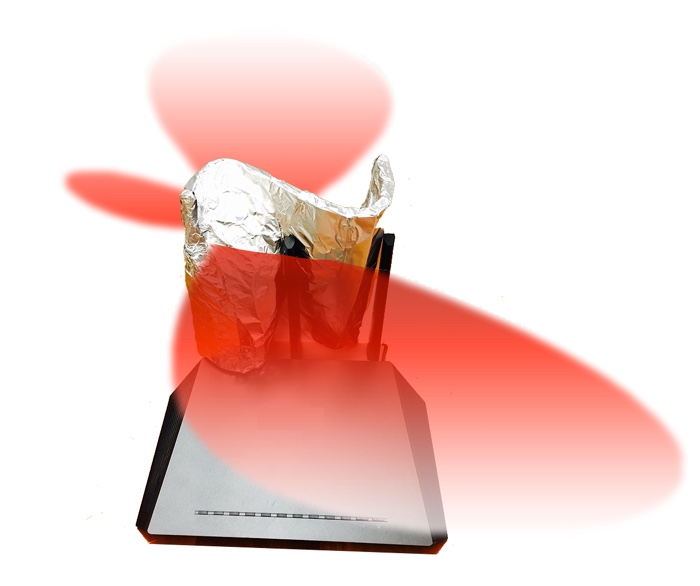 Best of all, the whole process only takes about 23 minutes to generate a functional reflector model, and the only costs involved relate to then getting the frame 3D-printed.

"With a simple investment of about US$35 and specifying coverage requirements, a wireless reflector can be custom-built to outperform antennae that cost thousands of dollars," says Zhou.

Of course, most of us probably aren't too concerned about weakening our Wi-Fi, but maybe we should be: having your signal leak outside your home could potentially enable malicious hackers to try to eavesdrop on (or control) your network, although the risks are probably pretty low.

While we don't have access to the researchers' algorithm for calculating the optimal shape for Wi-Fi reflectors based on our home layout, there's nothing to stop you having a play around with your own aluminium backing to see if you can improve your router's reach.

Just be aware, depending on where you live, modifying wireless signals like this could put you in breach of the law.

"I can't really advise people to use tinfoil or any sort of reflector, mainly for regulatory reasons," senior product development manager at Linksys, Eric Siu, who wasn't involved with the research, told Popular Science.

"In the US, the FCC actually governs the output power, so they have limitations as to what's the maximum power level your wireless router can radiate a signal in any particular direction."

But don't worry – if you'd prefer to keep your aluminium wrapped over last night's pizza leftovers instead, there are plenty of other ways to help optimise your home Wi-Fi, and we promise the FCC won't come knocking on your door.

The findings were presented at the Association for Computing Machinery's BuildSys 2017 conference in the Netherlands last week.