Bones are amazing. People are often surprised to learn that bone is a living tissue. It is widely understood that our bones have the ability to repair themselves after breaks and fractures.

But they are also constantly removing and rebuilding themselves in response to everyday activity, in a cellular process that we call remodelling.

Here are some other facts about the skeleton.

Textbooks teach that there are 206 bones in the human skeleton as the anatomical norm. But babies are born with over 300 bones, originally made of cartilage, which are mineralised during the first few years of life, and some bones fuse together.

Some people are born with extra bones, such as a 13th pair of ribs or an extra digit. Some people even develop extra bones during their lives.

A recent study showed that the fabella, a little bean-shaped bone found at the back of the knee, is becoming more prevalent in the human body because of improved nutrition and people getting heavier.

2. The human skeleton is constantly changing in height

The change in height of a child in their first year is the most rapid and we have reached our adult height by our mid- to late teens. But even once our bones stop growing, our height can still change.

At joints (spaces where two bones meet), there is a layer of cartilage covering the bones. Cartilage is a rubbery layer of tissue made up of water, collagens, proteoglycans and cells.

Over the course of a day, the cartilage, particularly in your spine, is compressed by gravity. This means that you are shorter by the time you go to bed. Thankfully, after a period of lying horizontally, the cartilage is able to return to its original size.

The lack of gravity in space has the opposite effect on astronauts who are up to 3 percent taller after a stint in space.

And it's not just the cartilage – even bones themselves shorten with impact. Scientists have shown that on impact when running, the tibia (shin bone) temporarily shortens by a millimetre.

3. Only one bone is not connected to another bone

The hip bone's connected to the thigh bone … but not all bones in the human skeleton are connected to each other. The one exception is the hyoid bone.

The U-shaped hyoid bone sits at the base of the tongue and is held in place by muscles and ligaments from the base of the skull and jaw bones above. This bone enables humans (and our Neanderthal ancestors) to talk, breathe and swallow.

It is very rare to break the hyoid bone, and a finding of fracture in a post-mortem examination may indicate strangulation or hanging. 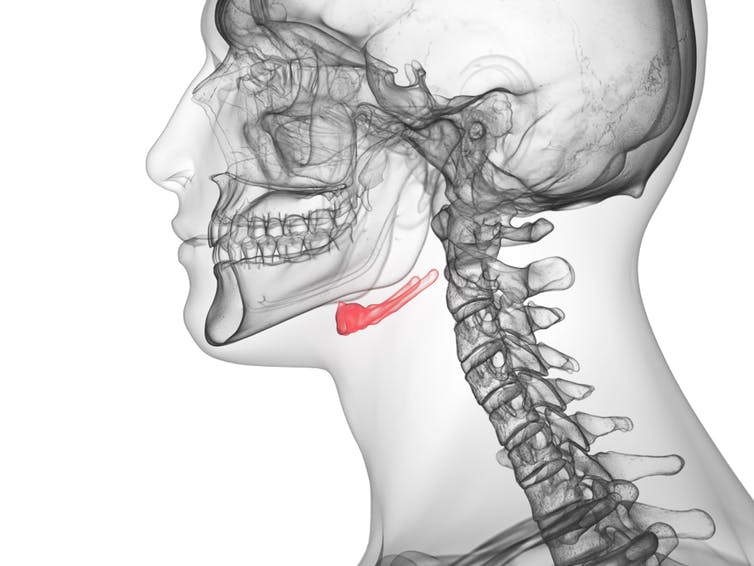 The hyoid bone is connected to … well, nothing really. (Sebastian Kaulitzki/Shutterstock)

Long bones, such as the thighbone, are filled with bone marrow made of fat cells, blood cells and immune cells.

In children, the bone marrow is red reflecting its role in making blood cells. I

n adults, the bone marrow is yellow and contains 10 percent of all the fat in the adult body. It was long thought that bone marrow fat cells were nothing more than a space filler, but scientists are increasingly learning how the fat inside bones has important metabolic and endocrine functions, affecting the whole human body.

5. The smallest bones are in the ear

The smallest bones in the human body are the malleus (hammer), incus (anvil) and the stapes (stirrup). Collectively, these bones are known as the ossicles (Latin for "tiny bones") and their role is to transmit sound vibrations from the air to the fluid in the inner ear.

Not only are these the smallest bones in the body, but they are also the only bones that do not remodel after the age of one. This is important, as a change in shape could affect hearing.

The ossicles are also important in archaeological and forensic cases. Because they form when we are in the womb, isotope analysis can give clues about the mother's diet and health in unknown adult skeletons.

6. Bones cause you stress

Within the human body, our sympathetic nervous system is the mechanism by which our body readies itself for intense activity. This is often called the fight-or-flight response and is associated with the release of the hormone adrenaline in response to a stressful situation.

But recently, researchers published a paper identifying osteocalcin, a hormone released by bone-forming cells, as a key player in the stress response.

Mice specifically bred without the ability to produce osteocalcin did not have a fight-or-flight response in acutely stressful situations compared with regular mice.

The scientists also examined the osteocalcin levels in humans, where they found raised levels in blood and urine after the human subjects were exposed to stress. Ultimately, it was shown that osteocalcin switches off the parasympathetic rest-and-digest mechanism, which allows the activation of the fight-or-flight response.

Given we have long known that the physical function of the skeleton is to protect the body – for example, the ribs protect our most important organs – maybe it shouldn't come as a surprise that our bones also have a physiological role in keeping us safe.