Snot Comes in Many Colors, And It Can Tell You About Your Health

Very few people talk about these things, but let's break that taboo.

The mucus in your nose serves many functions. Its color can tell you and your doctor a lot about what's going on in your body – especially when it's been an abnormal shade for a long time.

You should know that snot color is not enough to diagnose anything outright.

Still, it offers a unique glimpse into your body's strange ways of telling you that something's up. 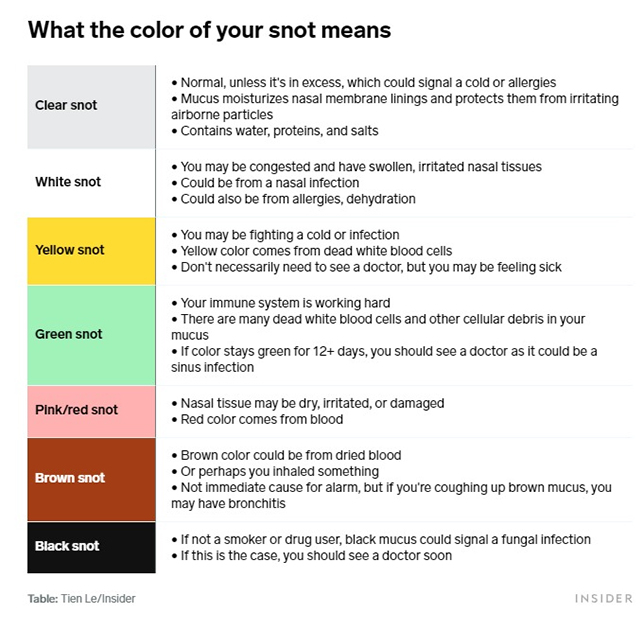 Clear snot means all is well

Clear mucus is totally normal. The body naturally produces a lot of mucus

Snot is a mixture of protective proteins and salts, with water. It keeps your nasal passages lubricated and germ-free by acting as a moisturizing barrier against dehydration and foreign objects, including bacteria and viruses.

Anything you breathe can get stuck on mucus like flypaper. Little hairs in the nose push mucus through the throat down to the stomach, where all the nasty bugs can get melted by stomach acid.

But it's not just found in the nose. This gel covers every moist surface of your body, including the nose, but also the lungs, sinuses, mouth, stomach, intestines, and even the eyes.

Having a little clear mucus in the nose is nothing to be worried about. But if the amount drastically increases, it could mean that you're suffering from allergies or the start of a cold or flu.

White snot means an infection could be going on

White mucus could mean a bunch of different things.

Most often, it means that your nasal passages are irritated and swollen, restricting mucus flow and causing it to dry out.

This could also be due to a nasal infection, allergies, or dehydration.

As immune cells fight off whatever it is that is irritating the nose, they release molecules that give the mucus that cloudy texture.

Your nose may become very runny at this stage. This is when you would likely be most contagious.

Though it is a common myth, research suggests milk does not make snot cloudier.

Yellow snot means you are probably fighting an infection

When you have an infection, your immune system's white blood cells rush to the site to fight and destroy the microbial invader, whether it's a bacteria or a virus.

After they've done their job and die, the white cells are flushed out of your body with your mucus, and in the process, can dye it yellow.

Yellow mucus doesn't mean that you need antibiotics – the body faces infections all the time and is very good at fighting them off.

An infection could also be caused by a virus, in which case the antibiotics would be useless.

At this point, you may want to wait it out and see if things improve over the coming week or so.

Green snot also means you are likely fighting off an infection

Your mucus can also turn green from a large build-up of dead white blood cells.

If your mucus has been green for a few weeks or longer, you should see your doctor, especially if you have a fever or feel nauseated.

Pink or red snot means there's blood in your nose

Red or pink mucus means there's some blood in your nose.

This results from any number of things, including allergies, infection, and lots of blowing or rubbing. Physical trauma – like walking into a wall face-first – can also turn your snot red.

It may also simply mean that the air is very dry.

Brown snot could be dried blood. Or maybe you snorted some dirt.

When blood from your nasal lining dries, it can mix with the mucus and turn brown.

But brown mucus isn't always because of blood. It could also be caused by dirt, dust, discoloration from cigarette smoke, snuff, or a spice.

If you're coughing up brown mucus, though, you should see a doctor because this could be a sign of bronchitis.

Black mucus is usually due to smoking

Black mucus is most common among heavy smokers, especially if they have a lung disease.

It can also be due to inhaling dirt or dust; or after smoking cigarettes or marijuana.

But it can also signal a serious fungal infection, especially if you have a compromised immune system.

If your mucus is black for no obvious reason, you should see a doctor. This is especially true if you have a fever, chills, or have difficulty breathing.