It's Possible to Accidentally Develop an Allergy to Red Meat. Here's The Science

When a 56-year-old farm worker from just outside Kansas City in Missouri, US, began noticing a rash on his waist and arms within hours of chowing down on a hamburger seven years ago, he wasn't sure what to make of it.

Like so many with alpha-gal syndrome (AGS), the path from tick bite to meat allergy wasn't a clear-cut one.

The hives and rashes didn't always appear after a meal containing meat, after all. Or they could pop up several times in one week. There was a shortness of breath on rare occasions, but nothing so bad it warranted a trip to the doctor.

In this specific case, summarized recently in the medical journal BMJ Case Studies, the patient's history was further complicated by seasonal allergies and treatment for the HIV he contracted at 21.

For years he'd report his symptoms to doctors, without any progress towards a concrete diagnosis. Changing detergents didn't help. Nor did wearing new clothes. Frustratingly, food allergies were initially ruled out, as symptoms generally occur within minutes of the consumption of the food you're allergic to, not hours.

His isn't an uncommon story. Roughly 3 percent of the population in some areas of the US is reported to have the kind of symptoms associated with AGS, though in truth we still know little about its prevalence.

For a disease that no doubt stretches far back through human history, it seems unthinkable that researchers have only been studying it in detail for some 20 years.

In 2002, British-born allergy researcher Thomas Platts-Mills had his attention drawn to allergic responses in cancer patients being treated with the cancer drug cetuximab.

While he'd come across individuals who'd claimed to experience an allergic reaction to certain meats and meat products, a link between the two was the furthest thing from his mind at the time.

The years passed, with severe cases of cetuximab reactions being recorded around the US.

Finally in 2008, Platts-Mills identified the root cause of the problem – an IgE antibody response to a carbohydrate called galactose-alpha-1,3-galactose. Or alpha-gal for short.

Alpha-gal is a sugar found in a wide variety of animals; primates like us happen to be an exception. Somehow, the sugar was being transferred from transgenic mice that were used to make the chemotherapy treatment.

Allergies are usually caused by the body responding to a protein it doesn't recognize. Coming across a carbohydrate that can trigger an allergic response was highly unusual.

With that mystery solved, however, there still remained the question of how patients developed the sensitivity in the first place.

There were a few clues. One was the pattern of cases, which overlapped suspiciously well with those of Rocky Mountain spotted fever, a disease borne by the lone star tick (Amblyomma americanum). 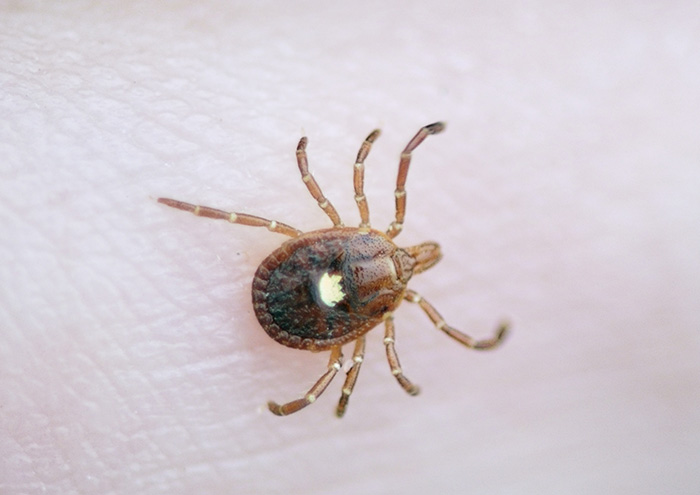 A second was a chance meeting with a hunter who presented with severe allergic reactions after eating beef. Already suspicious, Platts-Mills asked the man about tick bites. Sure enough, he'd had more than his fair share.

What ultimately convinced the researcher, however, was his own personal experience with the disease. Half-heartedly seeking to test his suspicions, Platts-Mills went on a hike in the mountains near his home, seeing if he couldn't pick up a few ticks of his own. Later that year, a meal of lamb chops resulted in an all-too-familiar allergic reaction.

Today, scientists are confident it's the alpha-gal stuck on proteins in tick saliva that sensitizes people to the carbohydrate found in meats such as lamb and beef. Since cooking doesn't break it apart, our bodies overreact to it as it finds its way into our system.

As for the farmer whose case was described recently, he finally found doctors who recognized the condition for what it was. Seven years after the symptoms first appeared, a friend told him about AGS. With ticks a common hazard of his job, the patient made the connection pretty quickly.

With an EpiPen in his pocket, and red meats off the menu, the patient has been relatively reaction-free for eight years now.

It's a happy ending we can all learn something from. AGS is still a relatively novel disease as far as research goes, meaning we have a lot to learn about its prevalence and its interactions with other illnesses and treatments, such as potential reactions to medications and their ingredients.

If you've got an inkling something doesn't feel quite right after a burger, bring it up with your doctor. It's not worth eight years of sweating it out.

The case description was published in BMJ Case Reports.