Temperatures on Neptune Are Mysteriously Fluctuating, And It Doesn't Make Sense

Neptune, as viewed by Voyager 2 in August 1989. (NASA/JPL-Caltech/Kevin M. Gill)

An unprecedented analysis of changes in the temperature of Neptune has revealed something rather strange taking place at the most distant planet in our Solar System.

Far-flung Neptune, which orbits the Sun at about 30 times the distance of Earth, takes an accordingly long time to make its trek around the star: about 165 Earth years, in fact, meaning each season on Neptune lasts for over 40 Earth years.

Right now, Neptune's southern hemisphere is in the midst of an epic four-decade-long summer, but for reasons scientists can't fully explain, the temperature hasn't exactly been warming up – at least not in the gradual way we might assume.

A new study compiling 17 years' worth of observations of Neptune's temperature instead shows the opposite taking place, with readings indicating a mysterious globally averaged drop of about 8 °C between 2003 and 2018, as evidenced by a significant decline in atmospheric radiation from 2003 on. 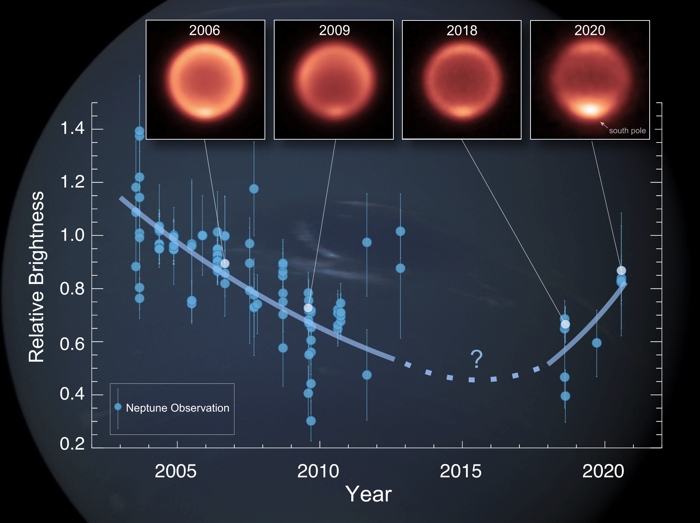 "This change was unexpected," says planetary scientist Michael Roman from the University of Leicester in the UK.

"Since we have been observing Neptune during its early southern summer, we expected temperatures to be slowly growing warmer, not colder."

Gathering reliable atmospheric temperature data for Neptune isn't the easiest task, given how far away this cold planet lies from Earth.

It's actually only been possible to get such readings since the turn of the century, with the advent of sensitive infrared measurements on newer space telescopes. One of those is VISIR (VLT Imager and Spectrometer for mid-Infrared) installed on the European Southern Observatory's Very Large Telescope (VLT), which can infer temperature based on the level of infrared light emission.

To study Neptune's infrared radiation, Roman and his team analyzed almost 100 thermal observations of the planet, many captured by VISIR, but also including data from NASA's Spitzer Space Telescope, and numerous ground-based telescopes in Chile and Hawaii.

The results – representing the largest compilation yet of currently available ground-based imaging of Neptune in the mid-infrared spectrum – suggest that temperatures in Neptune's stratosphere cooled (despite summertime) over much of the study period, although a late burst in emission between 2018 and 2020 suggests the atmosphere then rapidly warmed by about 11 °C in the space of just two years.

As for why Neptune's atmospheric temperature seems to fluctuate so unexpectedly mid-season, we can't fully be sure, but the researchers think changes in atmospheric chemistry might be behind the variations seen.

"While methane absorbs sunlight and warms the atmosphere, photochemically produced hydrocarbons – primarily ethane and acetylene – are powerful infrared emitters that serve to cool the stratosphere," the researchers explain in their paper.

"The balance between this radiative heating and cooling changes as the amount of photochemical hydrocarbons changes."

Previous research investigating Saturn's temperature found that the interplay of chemicals in atmospheric clouds could affect their temperature, leading to temperature peaks prior to maximum solar irradiation, and it's possible something similar might be happening here.

"Nonetheless, given Neptune's 165-year orbital period, any seasonal changes are expected to occur gradually over decades," the researchers write.

"The rapid changes observed between 2018 and 2020 appear surprisingly swift for seasonal response… Additional processes appear to be operating in Neptune's atmosphere on sub-seasonal timescales, and on both regional and global scales."

Another explanation could be weather variations – which might affect atmospheric cloud composition and chemistry – including the effects of dark vortices seen on Neptune, which is another of the planet's enigmas we're still learning about.

Solar flux is also worth considering, the researchers say, noting that radiance changes brought about by the Sun's activity cycle might somehow be triggering photochemical changes in Neptune's atmosphere, which could again account for the temperature fluctuations we're seeing.

All we really know for sure is we'll need a lot more research to get to the bottom of these surprising readings – just the latest mystery associated with this obscure, faraway world.

"I think Neptune is itself very intriguing to many of us because we still know so little about it," Roman says.

"This all points towards a more complicated picture of Neptune's atmosphere and how it changes with time."

The findings are reported in The Planetary Science Journal.