If you've seen the dystopian nightmare fuel that is BBC's Black Mirror, you might be getting the "No no nos" about Sony's latest patent application - 'smart' contact lenses with a built-in camera that can record, play, and even store videos right before your eyes.

With Google and Samsung having already filed patents for contact lenses with tiny, built-in cameras, these things seem inevitable, and they have the potential to change everything about the way we interact with each other… for better or worse.

So yep, that means in the future we could all be playing back recordings of old conversations to our friends and family to win an argument, or, you know, watching a 'greatest hits' compilation while having sex with our significant other. But we have more faith in the good of mankind than that, right?

Potential misuses aside, the technology behind these new 'smart eyes' is actually incredibly cool. The patent describes contact lenses that can 'sense' when you're making a deliberate blink rather than a natural one, and respond by turning the recording on or off.

"It is known that a time period of usual blinking is usually 0.2 seconds to 0.4 seconds, and therefore it can be said that, in the case where the time period of blinking exceeds 0.5 seconds, the blinking is conscious blinking," the patent application asserts.

While you might think that Samsung beat Sony to the punch when its very similar patent went public just three weeks ago, the key difference here is that these contact lenses have an internal storage mechanism.

When you record videos using Samsung's hypothetical contact lenses, the footage is sent directly to an external storage device, such as your smartphone. But Sony's patent describes a technology that allows you to store everything right there in the lenses for fast and easy access to your videos. 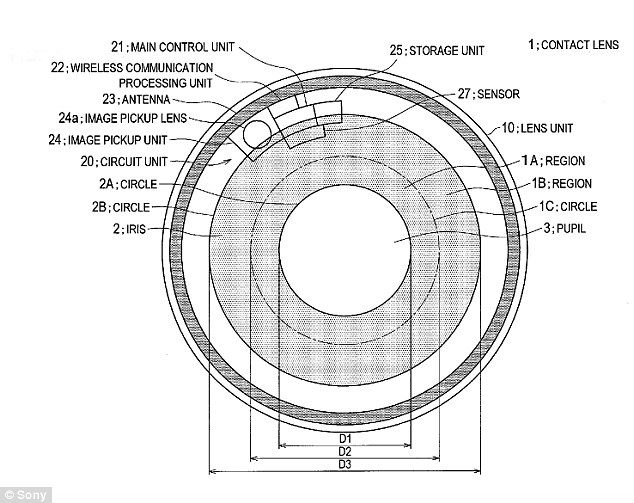 So how does it get all this done? As Tech Story reports, the lenses would be fitted with miniscule piezoelectric sensors, which can measure changes in pressure, acceleration, temperature, or force by converting them to an electrical charge. These sensors would read the eye movements of the user, and turn the recording on.

To get enough power to sustain the recording, the lenses would use a simple process known as electromagnetic induction, where a conductor is forced through a magnetic field to induce a modest electrical current.

Not only that, but it can also adjust for the tilt of the wearer's eye, and apply autofocus when things get blurry.

"Sony's patent likewise describes a display showing additional controls that can be activated by a 'tilt sensor'," Rhodi Lee reports for Tech Times. "The lens may even feature aperture control, autofocus, and image stabilisation to address the blur caused by the eyeball's motion."

Unfortunately, all of this, whether it's Google's, Samsung's, and now Sony's version of the 'smart eye' is still very much in the realm of the hypothetical.

But as Lee points out, there's evidence that these companies have been thinking about this technology for several years now, so something tells us they're not going to be giving up on it any time soon. The future is coming, let's hope it doesn't end up as utterly depressing as this makes it out to be.

You can read the entire patent application here.