While urine isn't high on most people's must-try lists, popular culture has promised us that, should we ever be inclined (or desperate enough) to drink our own pee, it'd at least be sterile. But new research has shown that this isn't the case, with the discovery of bacteria in the urine of healthy women.

The study doesn't just mess with your apocalypse hydration plan and everything we thought we know about urine - it calls into question one of the main techniques we currently use to diagnose disease.

Currently, if bacteria turns up in someone's urine sample, doctors conclude that the patient has a urinary tract infection or some other kind of disorder and treat them accordingly, because previous research had led us to believe that healthy urine is completely sterile. 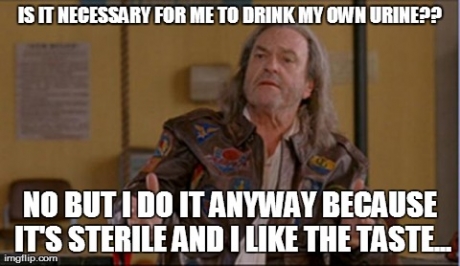 But now a team of scientists from Loyola University in the US has used a new technique to analyse urine samples collected directly from the bladders of healthy women, and found traces of bacteria that weren't expected to be there.

"Clinicians previously equated the presence of bacteria in urine to infections. The discovery of bacteria in the urine of healthy females provides an opportunity to advance our understanding of bladder health and disease," said lead researcher Alan Wolfe, in a press release.

This not only suggests that the current tests we're using have "limited utility", as Wolfe describes it, but also that there's a lot more going on in the urinary tract of patients than we previously understood.

The technique has already revealed that certain bacteria in the female bladder could contribute to urinary incontinence, and further research could help doctors better diagnose and treat disease.

"If we can determine that select bacteria cause various lower urinary tract symptoms, we may be able to better identify those women at risk and more effectively treat them," said co-researcher, Linda Brubaker.

The research has been published in the journal European Urology. And while it doesn't comment on the drinkability of urine, we're steering clear for now. Let's focus on using it to light our cities instead.