Within near-Earth space, there are over 18,000 asteroids whose orbit occasionally brings them close to Earth.

Over the course of millions of years, some of these Near-Earth Objects (NEOs) – which range from a few meters to tens of kilometers in diameter – may even collide with Earth.

It is for this reason that the ESA and other space agencies around the world are engaged in coordinated efforts to routinely monitor larger NEOs and track their orbits.

In addition, NASA and other space agencies have been developing counter-measures in case any of these objects stray too close to our planet in the future.

One proposal is NASA's Double Asteroid Redirection Test (DART), the world's first spacecraft specifically designed to deflect incoming asteroids. This spacecraft recently moved into the final design and assembly phase and will launch to space in the next few years.

This mission will test the kinetic impactor technique, which consists of striking an asteroid to shift its orbit and deflect it away from Earth – thus demonstrating our ability to protect our planet from a potential impact.

At present, the DART mission's launch window ranges from late December 2020 to May 2021.

Once it reaches space, DART will rendezvous with the binary asteroid known as Didymos (Greek for 'twin'), which consists of Didymos A – which measures about 800 meters (half a mile) in diameter – and the moonlet Didymos B, which orbits A and is about 161.5 meters (530 feet) in diameter.

The DART spacecraft will be relying on the NASA Evolutionary Xenon Thruster – Commercial (NEXT-C), a solar electric propulsion (SEP) system similar to what the Dawn spacecraft used to reach the Main Asteroid Belt.

This thruster system will not only reduce the overall weight of the spacecraft (which reduces the costs of launching into space), it will also allow for a significant degree of flexibility with the mission timeline and launch window.

Once in space, DART will gradually spiral out beyond the orbit of the Moon to escape Earth's gravitational pull and then fly towards Didymos. It will intercept Didymos B in early October 2022, when the asteroid system will be within 11 million kilometers (6.8 million miles) of Earth.

At this distance, ground-based telescopes and planetary radar will be able to observe and measure the change in momentum imparted to the moonlet.

Using an onboard targeting system developed by the JHUAPL, DART will then aim itself at Didymos B and strike the smaller body at a speed of about 5.95 kilometres per second (3.7 miles per second). Both the spacecraft and ground-based observatories will then verify that Didymos B has been pushed off course. 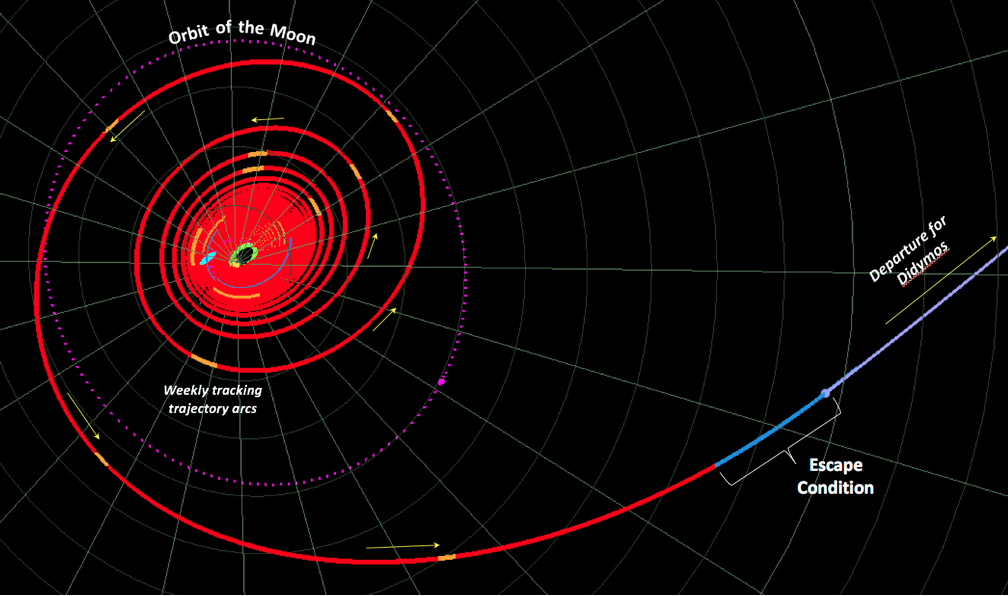 DART will rendezvous with Didymos (NASA)

As Andrew Rivkin, a who co-leads the DART investigation with the JHUAPL's Andrew Cheng, said in a recent JHUAPL press release:

"With DART, we want to understand the nature of asteroids by seeing how a representative body reacts when impacted, with an eye toward applying that knowledge if we are faced with the need to deflect an incoming object.

In addition, DART will be the first planned visit to a binary asteroid system, which is an important subset of near-Earth asteroids and one we have yet to fully understand."

In short, this test will allow scientists from around the world to determine the effectiveness of the kinetic impact technique as an asteroid mitigation strategy. However, the most important tool when it comes to planetary defense remains the ability to track objects and issue early warnings of any potential close flybys of Earth.

Established in 2016, the PDCO is responsible for finding, tracking and characterizing potentially hazardous asteroids and comets, issuing warnings about possible impacts, and assisting with plans for government-led responses to actual impact threats.