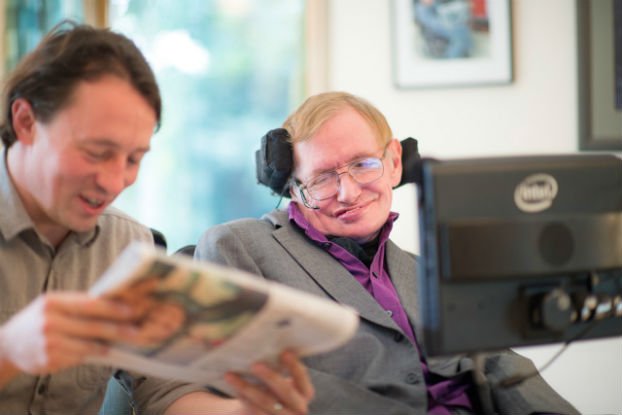 Three decades ago, eminent British physicist Stephen Hawking was offered a computer system that allowed him to ‘speak’. Suffering from a motor neuron disease that robbed him of all mobility, Hawking uses a sensor in his cheek, which communicates with an infrared switch on his eye glasses, and together they transmit signals to the computer software whenever he moves his eyes or cheeks. These signals are translated into words and sentences - as if he was typing - which are fed through a voice synthesiser on his laptop.

The Windows-based system is also crucial to Hawking’s work, allowing him to perform basic word processing functions and Internet browsing. But, says Ariel Schwartz at Fast Company, the software has become less convenient as Hawking finds it more difficult to make facial expressions, and it’s been unable to adapt to Hawking’s declining typing speed, which is down to about one word per minute. The word prediction software was rudimentary, and he couldn’t even attach a file in an email without his assistant's help.

So now, for the first time in 20 years, Hawking is getting an upgrade. The new speech system has been developed by US-based tech giant, Intel, and its design is personalised based on Hawking’s everyday needs. "He wanted to be more independent and in control of his system," Horst Haussecker, senior principal engineer and director of Intel's Computational Imaging Lab, told the press. "When we came in, we said, 'We’d like to treat you like a scientific experiment.' Of course being a scientist, he really liked that idea.”

The new system has now doubled Hawking’s typing speed and has upgraded word prediction software that learns from his behaviour the more he uses it. This means that the more the software comes to know Hawking’s communication patterns, he’ll only need to type 20 percent of the characters he normally would, and the software will go ahead and fill in the rest.

It's also solved a rather unusual dinner party problem, as Schwartz explains at Fast Company: "Since he has a cheek sensor, his old system would produce a string of random text every time he chewed during a meal. It was embarrassing, and incredibly, the system didn't have a mute button. The new system does."

The great news for everyone else is that by January, the same speech system will become open-source, with Intel releasing the code base to the public so it can be used and adapted. According to Alyssa Newcomb at ABC News, there’s currently 3 million people in the world with motor neuron disease or quadriplegia, so access to a new and personalised speech system could be life-changing for a lot of people.

You can read an in-depth look into the development of Hawking's new speech system over at Wired UK.

And in other Hawking news, guess who marked the impending Bond film announcement by telling the media that he’d be cool with being the villain? This guy. "My ideal role would be a baddie in James Bond. I think the wheelchair and the computer voice would fit the part," he said.