A painting found stashed inside a wall at an Italian museum has been confirmed as the stolen "Portrait of a Lady" by Austria's Gustav Klimt, prosecutors said on Friday, two decades after the artwork went missing.

The century-old painting was discovered concealed in an external wall by gardeners at the Ricci Oddi Gallery of Modern Art in Piacenza, northeast Italy, last month.

The museum estimates that the 55-by-65-centimetre (21-by-26-inch) expressionist work could be worth between 60 and 100 million euros (US$67-111 million), but notes the difficulty in estimating the work as it has never been sold on the market.

"It is with no small emotion that I can tell you the work is authentic," prosecutor Ornella Chicca told reporters. 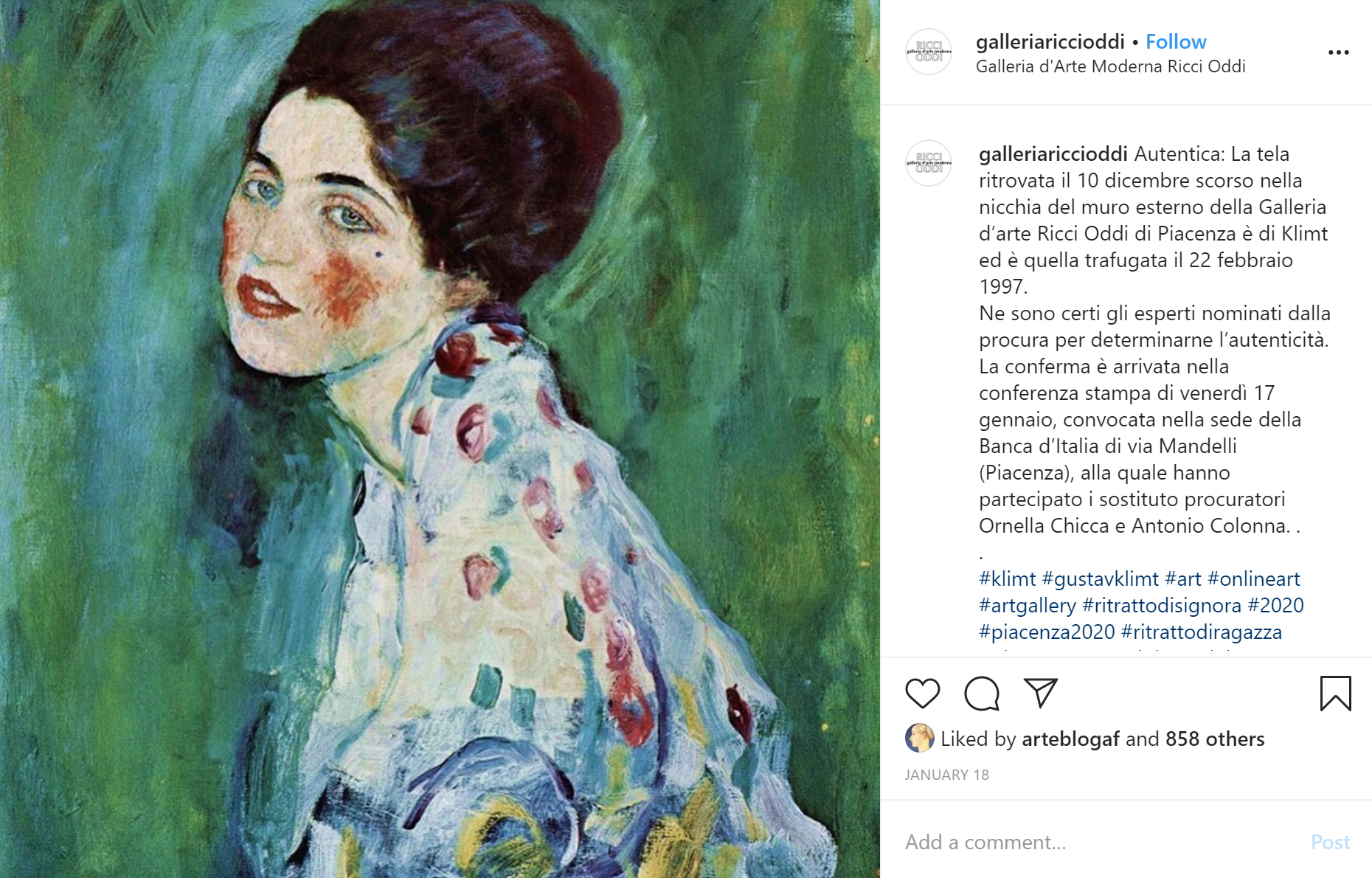 Museum officials had initially said they could not immediately determine whether the painting was indeed the stolen Klimt until scientific tests were undertaken.

Painted in 1916-1917, the expressionist work depicts the face and torso of a young woman with brown hair, over an emerald green background.

The painting went missing in February 1997 while the museum was closed for work.

Wrapped in a bin bag

In December, gardeners removing ivy from a wall found a small ventilation space and discovered the painting inside, without a frame and wrapped in a black garbage bag. Gardening work being done on the gallery. (galleriariccioddi/Instagram)

The ivy covering the space had not been cut back for almost a decade.

Chicca said further tests would determine whether the painting had been lingering inside the wall space since it was stolen, or whether it had been hidden there at a later date.

"At the moment, we can't say whether it has been there all along," the prosecutor said.

Once those tests were completed, the painting will hopefully be returned to the gallery's walls, she said.

Art expert Guido Cauzzi studied the work under infrared and ultraviolet light, comparing images to those taken during tests performed in 1996.

"The correspondence between the images allowed us to determine that it's definitely the original painting," Cauzzi said.

The condition of the painting was "relatively good," he said.

"It's gone through a few ordeals, but only needs some routine care, nothing particularly complicated," Cauzzi added.

Fellow art expert Anna Seller has examined the picture's frame, as well as the seals and labels at the back and says all appear to be authentic.

In 1996, it was determined through X-ray analysis that the painting covered up another, that of the face of a different woman.

The Ricci Oddi Gallery of Modern Art takes its name from a rich art collector originally from Piacenza, some 70 kilometres (45 miles) from Milan, who entrusted a collection of 450 mostly 19th-century paintings to the municipality in 1931.

The museum's president Massimo Ferrari had told AFP, after the lost painting was first discovered in the wall in December, that there were "positive signs" that this was the genuine Klimt.