Study Reveals There's No Such Thing as 'Male' or 'Female' Brains

For centuries, people have clung to the belief that there's something inherently different between the male brain and the female brain.

But in a new study, scientists combed through the brain scans of more than 1,400 people, and found that while there are some distinct brain differences between men and women, there's no such thing as a distinctly 'male' or 'female' brain.

"Our study demonstrates that, although there are sex/gender differences in the brain, human brains do not belong to one of two distinct categories: male brain/female brain," the researchers wrote in the study, which was published Monday in the journal Proceedings of the National Academy of Sciences.

It has long been assumed that men and women have different brains. And some previous research had supported that notion, finding some differences in the structure of male and female brains.

But other research had defied the notion that human brains can be divided into simple 'male' and 'female' categories.

To get at an answer, Daphna Joel, a psychologist at Israel's Tel-Aviv University, and her colleagues analysed MRIs scans from four separate studies comprising a total of more than 1,400 people.

The researchers scored the study participants on a number of variables like personality traits, relationships, activities, and attitudes. Then, they took traits that were more commonly seen in a subset of men or women, and defined male/female categories based on scores for those traits. They also had a category classified as 'intermediate' for those who scored somewhere in between.

Next, the researchers determined whether each brain fit into one of their three categories: male, female, or intermediate. If it didn't, meaning it had at least one trait at the 'female end' and one trait at the 'male end', it was said to show 'substantial variability'.

The differences between male and female brains were minimal, the researchers found. Depending on the data set, between a quarter and more than half of the brains they studied showed substantial variability. In comparison, 8 percent of brains or fewer fit neatly into the categories.

This graphic shows the volumes of brain regions in 42 adults, revealing how much overlap there is between male and female brains (green = large, yellow = small): 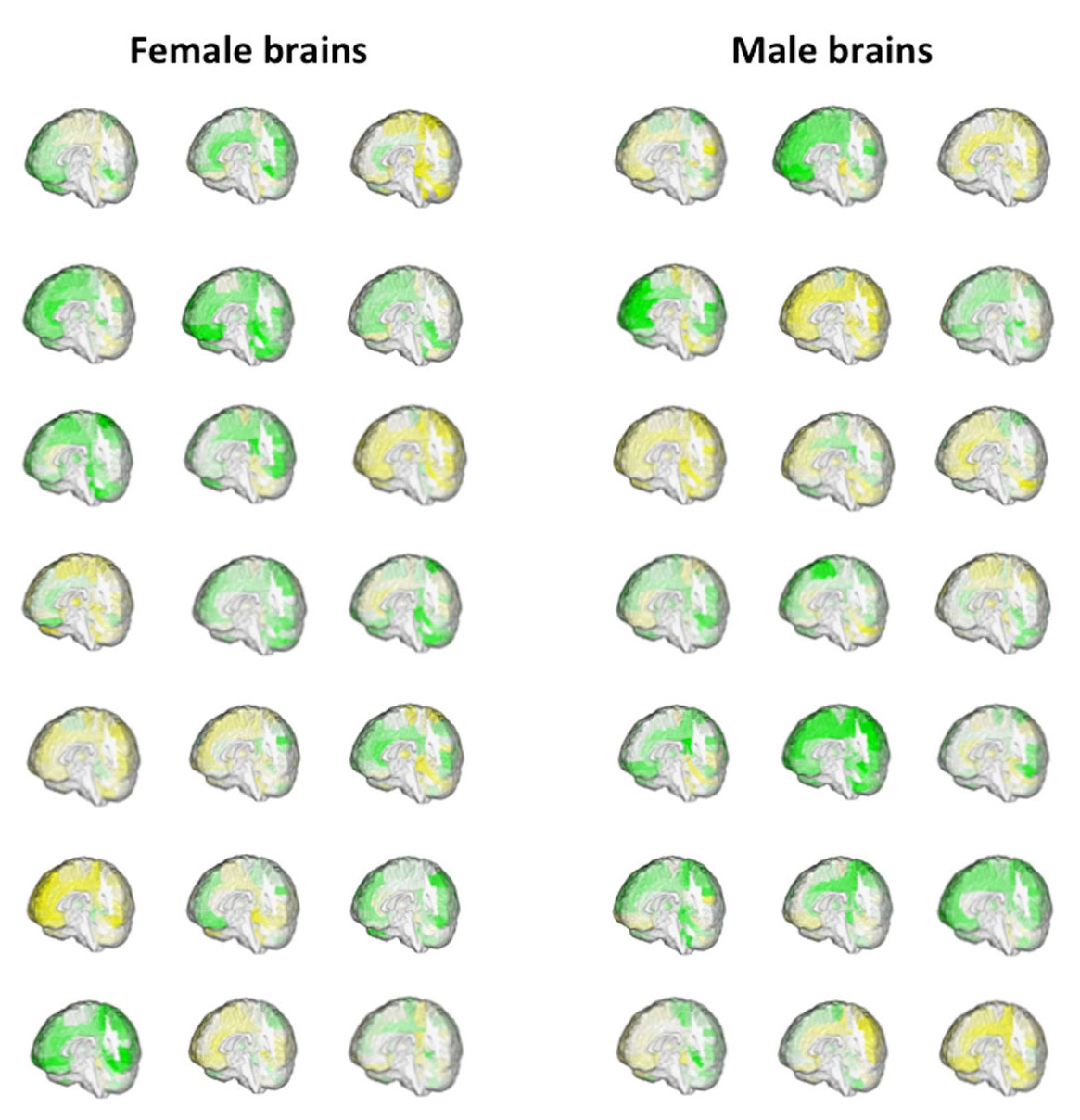 The fact that there was so much overlap between characteristics of 'male' and 'female' brains suggests that most people don't fit into one of these two categories.

Margaret McCarthy, a neuroscientist at the University of Maryland who was not involved with the study, said it offered the first strong evidence that there's no such thing as a male or female brain. That's not to say there are no sex differences in the brain, but these differences are not uniformly different in any one individual, she told Business Insider in an email.

Like any study, of course, this one has its weaknesses as well. For one, it looked at patterns of brain connectivity, but did not connect those patterns to behaviour, McCarthy pointed out. In other words, we won't know whether people whose brains fit mostly in the masculine or feminine zones also act typically masculine or feminine.