Mars' Vanished Oceans May Be Trapped Within The Planet, Scientists Say

Billions of years ago, Mars was home to lakes and oceans - but where all the water went to transform the planet into the desolate rock we know today has been something of a mystery.

Most of it was thought to have been lost to space, but a new study funded by NASA proposes that it didn't go anywhere but is trapped within minerals in the crust.

"We're saying that the crust forms what we call hydrated minerals, so minerals that actually have water in their crystal structure," Eva Scheller, lead author of the new paper in Science, told AFP.

In fact, Scheller's model suggests anywhere between 30 - 99 percent of the initial water remains trapped inside these minerals.

Because the planet lost its magnetic field early in its history, its atmosphere was progressively stripped away, and it was assumed this was how it lost its water.

But the authors of the new study believe that while some of the water did disappear, the majority remained.

Using observations made by Mars rovers as well as of meteorites from the planet, the team focused on hydrogen, a key component of water.

There are different kinds of hydrogen atoms. Most have just one proton in their nucleus, but a tiny fraction, about 0.02 percent, have both a proton and a neutron, making them heavier. These are known as deuterium, or "heavy" hydrogen.

Because the lighter kind escapes the planet's atmosphere at a faster rate, the loss of most of the water to space would leave relatively more deuterium behind.

But given how much water the planet is believed to have started with, and the current rate of hydrogen escape observed by spacecraft, the current deuterium-to-hydrogen ratio cannot be explained by atmospheric loss alone.

Schematic representation of our assumptions for the Noachian, Hesperian, and Amazonian periods. (Scheller et al., Science, 2021)

The study's authors instead say there was a combination of two mechanisms: the trapping of water in minerals in the planet's crust as well as the loss of water to the atmosphere.

"Anytime that you have a rock and it's interacting with water, there's a series of very complex reactions that form a hydrated mineral," said Scheller.

But on our planet volcanoes recycle the water back into the atmosphere. Mars, however, doesn't have tectonic plates, making the changes permanent.

According to the teams' simulations, the planet lost between most of its water between four to 3.7 billion years ago, which means "Mars was pretty much like we see how it is today for the past three billion years," said Scheller. 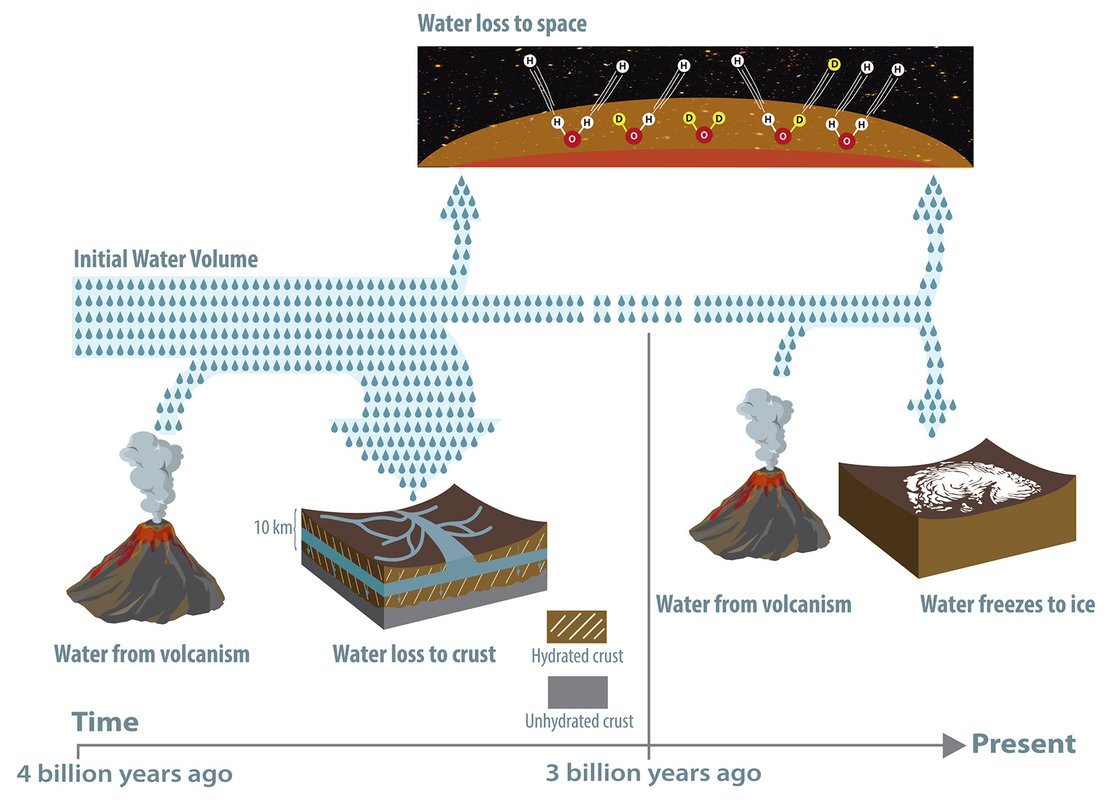 She added she was excited about what the Perseverance rover, which landed last month for a multi-year science mission on the planet, might be able to contribute to the area of research.

"The Perseverance rover is actually going to investigate exactly these processes and reactions that cause the sequestration of water in the crust," she said.

The team's model contains multiple scenarios, which they to compare to new data acquired by the rover.