Cancer stem cells can take cover and evade chemotherapy by hiding in fatty tissue, according to new research.

A team of scientists in the US looked at the behaviour of leukaemia stem cells in mice and found they were building their own hideout in the fat – a bolt-hole that then increased their resistance to chemo treatments.

Not only that, but the cancer cells apparently use the fatty deposits to generate extra energy for themselves. The researchers say this activity could help explain why some cancers prove harder to treat, and are more likely to recur.

The fatty tissue acts as a  kind of "robber's cave" for the cancer cells, according to the team from the University of Colorado Cancer Centre.

"The basic biology was fascinating: the tumour adapted the local environment to suit itself," said researcher Craig Jordan.

When analysing a mouse model of leukaemia, the researchers noted the fatty (or adipose) tissue had a higher concentration of cancer stem cells to regular cancer cells.

Like healthy stem cells, cancer stem cells are capable of developing into several cell types, and are thought to form new tumours and cause relapses. 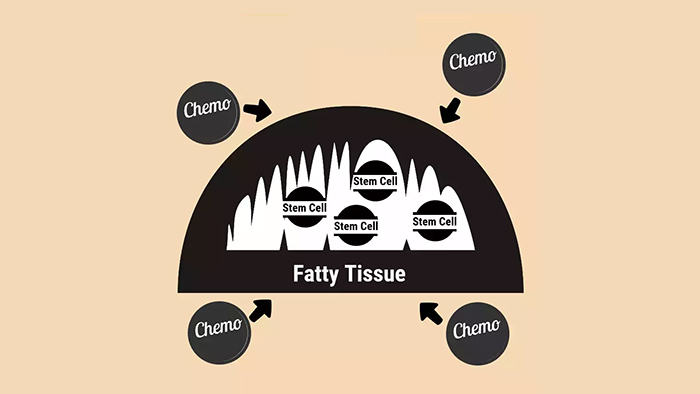 These cancer stem cells were also found to be triggering a process called lipolysis, where fatty acids are released from tissue to produce energy: in essence, the cells were creating a new energy source for themselves.

When a chemotherapy treatment was introduced, the cancer stem cells hiding in the fatty tissue and living off its acids were noted to be more resistant than the other cancer stem cells outside the tissue. The same effects were found in samples of human leukaemia.

Three clues prompted the scientists to carry out their research: obesity is already linked to a poorer recovery rate for leukaemia patients; cancer stem cells drive growth and can cause relapses in leukaemia; and they rely heavily on the tumour micro-environment they're in.

With those factors in mind, the researchers wondered – could cancer stem cells in fatty tissue be causing poorer prognosis in obese patients? From the new findings, it seems the answer could be yes, although this is still just a hypothesis for now.

The researchers intend to follow up their study by testing mouse models of different obesity levels, to see if extra fat provides more space for cancer stem cells to hide away in (or more energy for them to live off).

Obesity increases the risk of several cancer types, although scientists haven't yet pinned down the reason why.

Although this new study doesn't solve the problem, it means we're getting closer, giving us new understanding into why leukaemia in overweight patients is harder to fight and more likely to come back.

The findings are published in Cell Stem Cell.