NASA's Mars Reconnaissance Orbiter (MRO) has been in orbit around Mars for almost 14 years. It carries a variety of instruments with it, including the Compact Reconnaissance Imaging Spectrometer for Mars (CRISM) instrument. That instrument has collected thousands of images of Mars.

CRISM's main purpose is to created detailed maps of the surface mineralogy of Mars. It can detect iron, oxides, phyllosilicates (clays,) and carbonates. All of these materials are indications that Mars was wet in the past, or is still wet now.

Usually, CRISM images are paired with High Resolution Imaging Science Experiment (HiRISE) images of the same area. HiRISE is one of three cameras on the MRO, and the most powerful. In fact, HiRISE is a reflecting telescope, the largest ever carried on a deep space mission. It can image the surface of Mars in great detail, and NASA makes HiRISE images available on the website.

HiRISE captures color images at high resolutions. The CRISM instrument can tell us about the chemical properties of its images, but its resolution is limited to about 18 meters/pixel, much lower than HiRISE's 0.3 meters/pixel. The HiRISE team uses both of the instruments together sometimes.

When they're imaging a region with compositional diversity, HiRISE can map compositional units at a greater resolution than CRISM. The team makes a powerful pair when it comes to understanding the differences between compositional units, and also when investigating potential landing sites, like the site for MSL Curiosity. 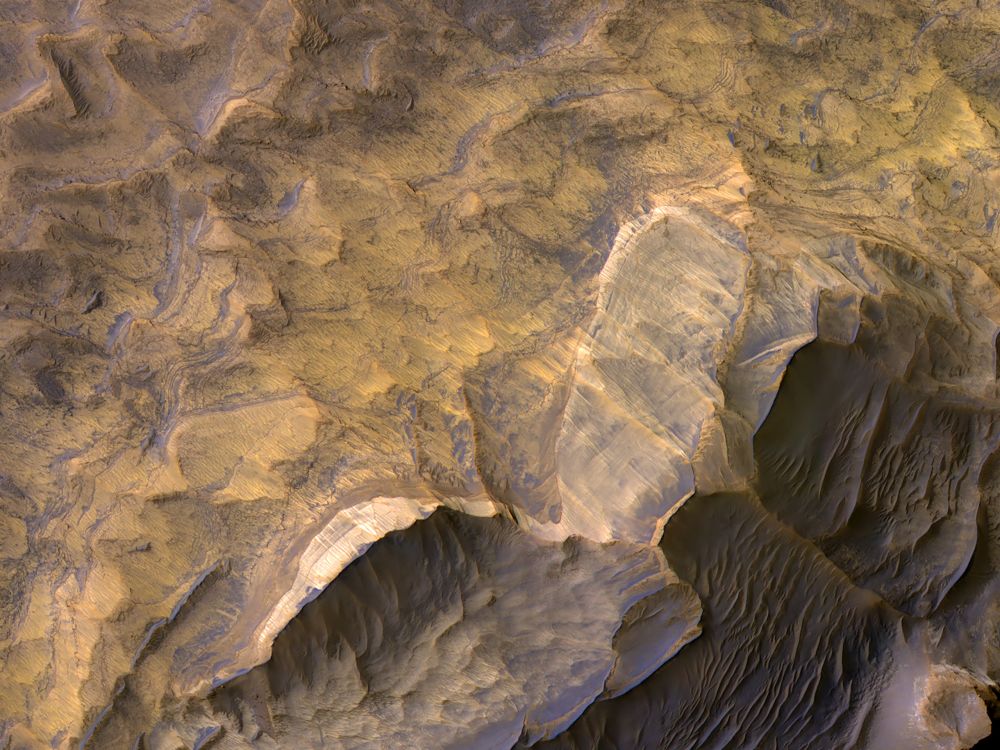 The sandstone may have formed in an ancient wet environment. (NASA/JPL/University of Arizona)

This HiRISE Picture of the Day (HiPOD) shows sandstone in the West Candor Chasma, in Valles Marineris. It captures the beauty that persists, even on a cold, dry, and likely dead world. The scalloped ridges beg to be explored.

The HiPOD gallery is a nice place to spend some time, and the gallery contains images showing the many different faces of Mars. The image below is of some sand dunes.

On Mars, sand dunes are blown around by the wind, slowly moving across the surface. But these dunes are frozen in place in south Melas Chasma, the widest part of the Valles Marineris.