Large fluctuations in cryptocurrency prices are common, which makes them a highly speculative investment. What kind of people are willing to take the risk, and what motivates them?

We conducted a survey to find out. In particular, we wanted to know about the relationship between the so-called "dark tetrad" personality traits and attitudes towards cryptocurrency.

In psychology, the "dark tetrad" refers to a group of four personality traits. These are Machiavellianism, narcissism, and psychopathy (together known as the "dark triad"), plus sadism.

They are called "dark" because of their "evil" qualities: extreme selfishness and taking advantage of others without empathy. The dark tetrad are also often related to risk-taking behaviors.

The appeal of cryptocurrency

We identified two main areas of appeal. First, the high risks and high potential returns of crypto trading make it attractive to the kind of people who like gambling.

Second, cryptocurrencies are not issued or backed by governments like traditional or "fiat" currencies. This makes them attractive to people who distrust government.

What are the personalities of crypto buyers?

We asked 566 people to complete online personality surveys as well as answer questions about their attitudes to crypto and whether or not they planned to invest in it. Of our participants, 26 percent reported they own crypto and 64 percent showed interest in crypto investing.

We measured their dark tetrad traits using standard psychological tests. We also measured traits that might connect the dark tetrad to judgements about crypto: fear of missing out (FOMO; the feeling that others are experiencing better things than you are), positivity (the tendency to be positive or optimistic in life), and belief in conspiracy theories.

Why do people want to buy crypto? It's not just about making money

A common reason to invest in crypto is the hope of earning high returns. Beyond the desire to build wealth, our research shows dark personality traits also drive crypto buying.

Machiavellianism is named after the Italian political philosophy of Niccolò Machiavelli. People who rate highly on this trait are good at deception and interpersonal manipulation.

Machiavellians take a calculated approach to achieving goals, and avoid impulsive decisions. They are less likely to engage in problem gambling.

Machiavellians also tend to believe strongly in government conspiracies. For example, they often believe politicians usually do not reveal their true motives, and that government agencies closely monitor all citizens.

We found Machiavellians like crypto primarily because they distrust politicians and government agencies. Many crypto supporters believe governments are corrupt, and crypto avoids government corruption.

Narcissism is a self-centered personality trait, characterized by feelings of privilege and predominance over others. Narcissists are overconfident and are more willing to do things like make risky investments in the stock market and gamble.

Psychopathy is a callous, impulsive antisocial personality trait. Psychopathic people often find it difficult to perceive, understand, or address emotions due to a lack of emotional intelligence and empathy.

The reckless nature of psychopaths makes them more resistant to stress and anxiety. As a result, psychopaths like stimulation-seeking and risk-taking. They are prone to gambling and gambling addiction.

We found that impulsive psychopaths like crypto, because they fear missing out on investing rewards that others are experiencing.

How is sadism involved?

Everyday sadism relates to a personality enjoying another's suffering. Sadists often display aggression and cruel behaviors. For example, sadists troll others on the Internet for enjoyment.

At first glance, buying crypto is unlikely to harm others. However, we found sadists like crypto because they do not want to miss out on investment rewards either. To them, perhaps both the pleasure from seeing another's pain and the fear of missing out are related to selfishness.

Unlike narcissists, we found both psychopaths and sadists lack positivity about their prospects, which cancels out their liking of crypto. 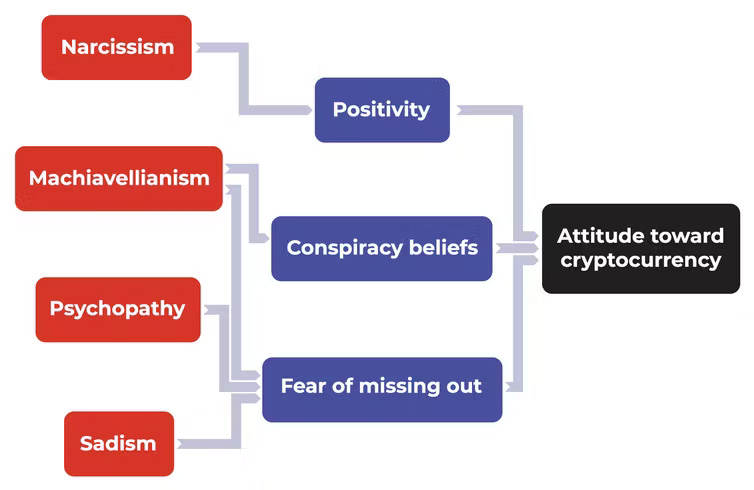 Above: Dark tetrad personality traits influence positivity, conspiracy beliefs, and fear of missing out, which in turn influence attitudes to cryptocurrency.

Studying cryptocurrency through the psychological lens of the dark tetrad offers insight into why people want to buy crypto. We are not suggesting that everyone interested in crypto displays dark tetrad traits.

We studied only a subset of people interested in crypto who do have these traits. If you happen to be a Bitcoin or other crypto holder, you may or may not exhibit them.

If you want to know how you score for dark tetrad traits, you can do the Dark Triad Personality Test and Sadism Test online.