T. Rex Really Could Crush a Car in Its Jaws, Without Damaging Its Own Skull

The Tyrannosaurus rex had the strongest bite of any known land animal – extinct or otherwise.

The king of the dinosaurs was capable of biting through solid bone, but paleontologists had long been baffled as to how it accomplished this feat without breaking its own skull.

In a new study published in the journal The Anatomical Record, researchers found that the T. rex had a rigid skull, like those of modern-day crocodiles and hyenas, rather than a flexible one like birds and reptiles. That rigidity enabled the dinosaur to bite down on its hapless prey with a force upwards of 7 tons.

"The highest forces we estimated in T. rex were just shy of 64,000 Newtons, which is about 6.5 metric tonnes (7.1 tons) of force," Ian Cost, the lead author of the new study, told Business Insider.

Modern-day saltwater crocodiles, which hold the chomping record for any living animal, clamp down with a force of 16,460 newtons – only about 25 percent as strong as a T. rex's bite. 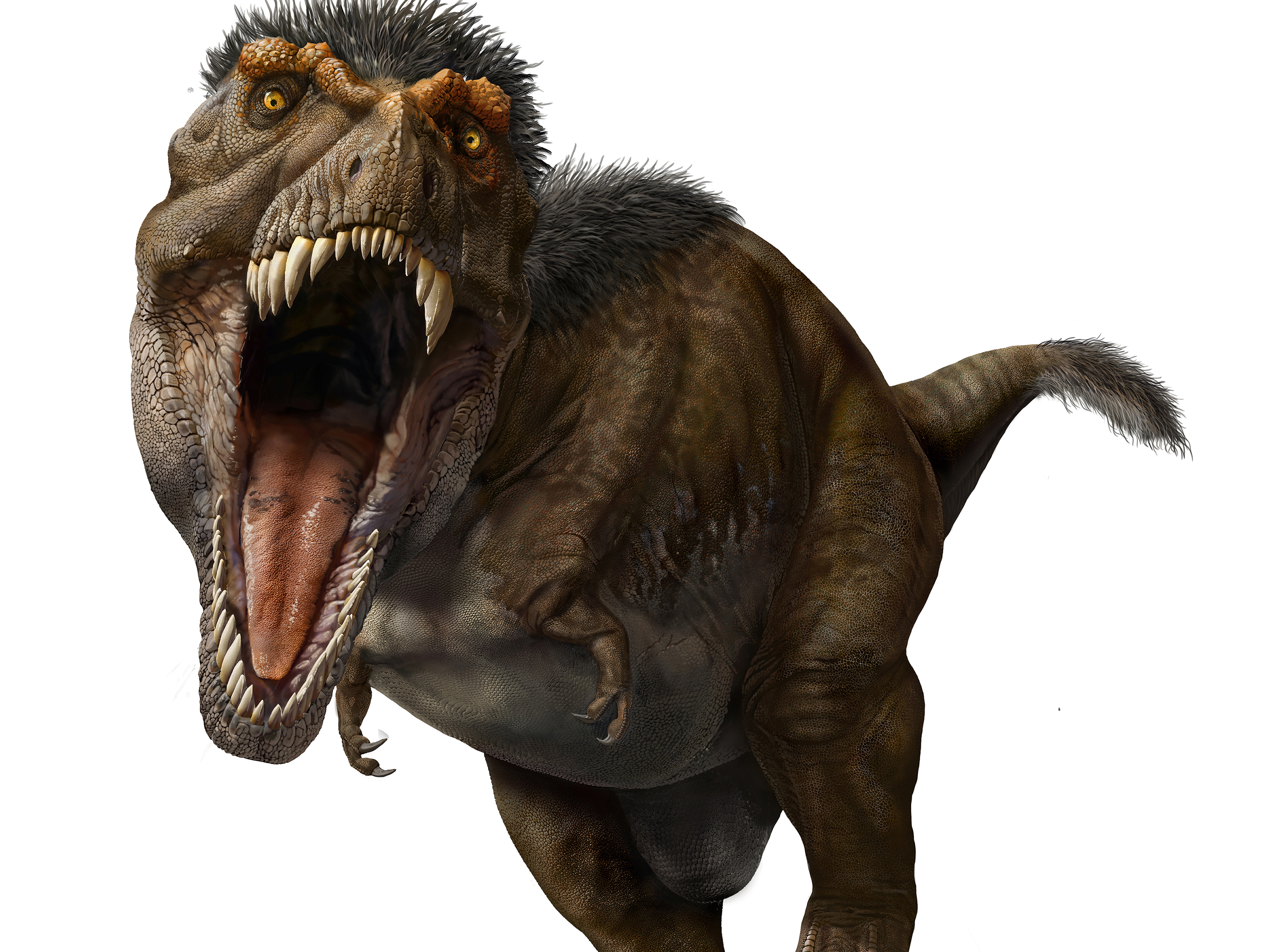 Scientists weren't sure whether T. rex skulls were flexible or rigid

Some creatures need to have parts of their skull moving different directions at once, and independently of their jaws. Snakes that swallow animals whole, or birds that have to nibble awkwardly-shaped foods, benefit from having a mobile skull.

Paleontologists first hypothesised that T. rex might also have benefited from mobile joints, moving its skull bones around to help bite with full force.

But Cost said that thinking didn't align with what scientists observed in modern-day predators like crocodiles and hyenas, which leverage the greatest bite forces of any animals alive today. Crocs' skulls are very rigid, with little to no cranial kinesis.

So Cost's group modelled how parrots' and geckos' skulls and jaws – two animals with mobile skulls – worked, and then applied those movements to a T. rex skull.

"What we found was that the skull of T. rex actually does not react well to being moved around and prefers to not move," Cost said.

According to Casey Holliday, a co-author of the study, there's a trade-off between movement and stability when a creature bites down with a lot of force.

"Birds and lizards have more movement but less stability," he said in a press release.

Less bite stability and range of motion limits the amount of bite force an animal can muster.

T. rex jaws could crush a car, as the Hollywood monster does in Jurassic Park

Mark Norell, a curator at the American Museum of Natural History, has described the T. rex as "a head hunter", since the predator had the rare ability to bite through solid bone and digest it.

Paleontologists know this from the dinosaur's fossilized poop; they have discovered T. rex faeces containing tiny chunks of bone eroded by stomach acid.

According to Cost, a rigid skull enabled the T. rex to bite through bone. That's how the dinosaur was "capable of producing enough force to crush some cars, but maybe not every car."

He added that funelling the T. rex's 7.1 tons of bite force "through a tooth or two at impact results in incredible pounds per square inch of pressure that could puncture-crush many vehicles, Jeep tires included."

In the 1993 Hollywood blockbuster, Jurassic Park, a T. rex escapes its paddock and attacks two Jeeps that have broken down nearby. The predator, hoping to nibble on two kids trapped inside the car, flips one Jeep upside down and proceeds to bite into the vehicle's undercarriage, puncturing a tire.

But the T. rex wasn't the only Cretaceous-era dinosaur to have an immobile skull, Holliday told Business Insider.

The Triceratops and Ankylosaurs also had fixed, akinetic skulls. Plus, some close relatives of the T. rex, including Oviraptors and Therizinosaurs, don't have the features that suggest they had flexible skulls, either. 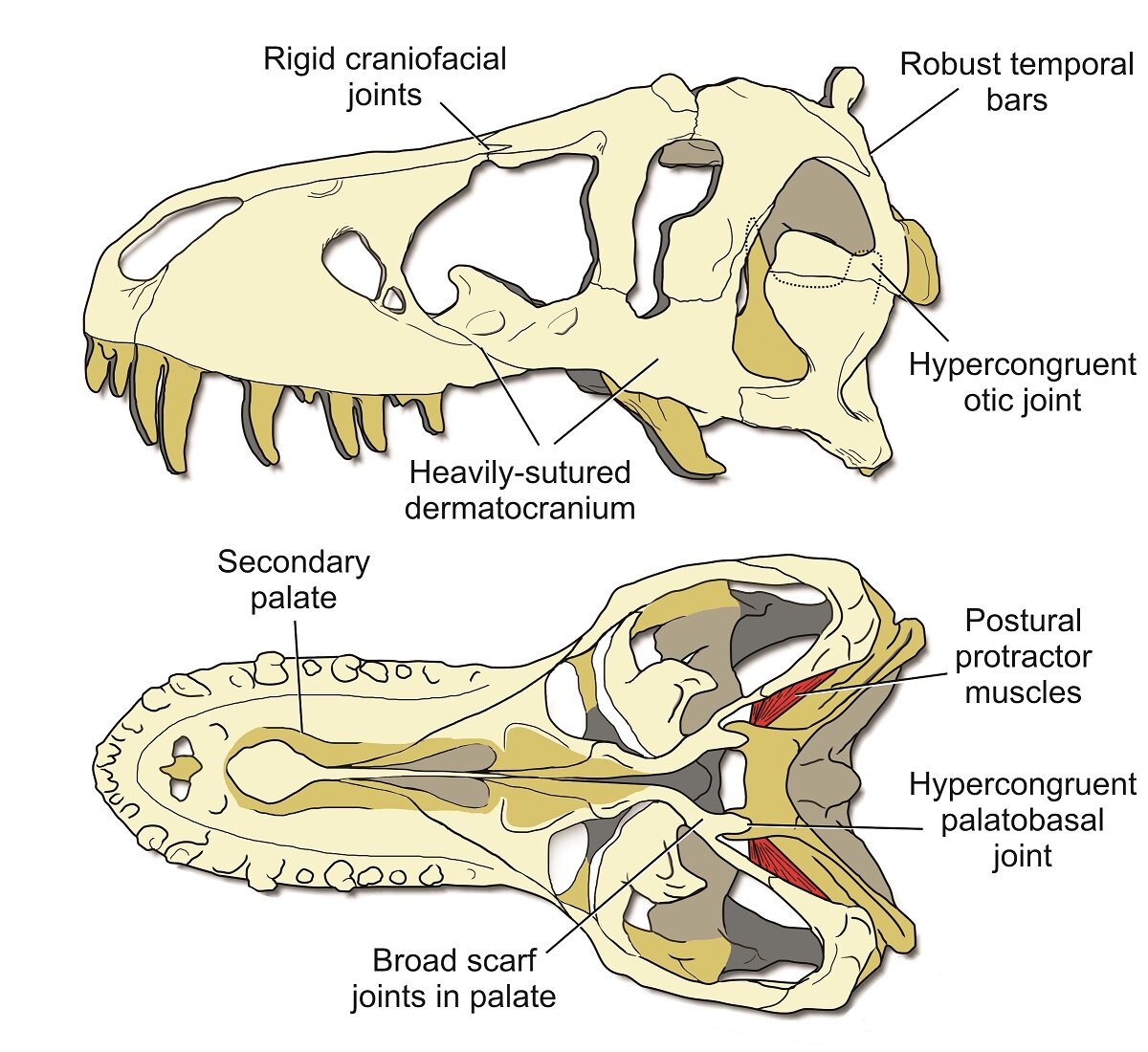 Was the T. rex was a hunter, scavenger, or both?

According to experts at the American Museum of Natural History, the T. rex was a cannibal. But scientists don't know whether the dinosaurs killed one another or just ate T. rexes that were already dead.

When it comes to the dinosaur's other dietary preferences, arguments persist about whether the dinosaur was a hunter or a scavenger.

"A bulk of the evidence points to T. rex being a predator, not a scavenger," Gregory Erickson, a paleontologist from Florida State University, previously told Business Insider. "It was a hunter, day in and day out."

Cost said his study results, which indicate the T. rex's skull handled prey in a similar way to a hyena's, could shed some light on the debate.

"Hyenas, we know, are both hunters and scavengers," he said. "I think, if anything, that T. rex was both a hunter and an opportunistic scavenger."