Astronomers Have Discovered Another Mysterious Dimming Star, And It's Even More Epic

We have another juicy cosmic mystery on our hands. Another star has been caught in the act of dimming, and doing so in a really peculiar way. The light of EPIC 204376071, a star just 440 light-years from Earth, dimmed by up to 80 percent for an entire day.

That's a huge amount of blocked light! Even the famously dimming 'alien megastructure' bust KIC 8462852, also known as Tabby's star or Boyajian's star, has only dimmed by up to 22 percent.

But EPIC 204376071 gets even more interesting. It dimmed quite suddenly, hitting a peak of 80 percent, then brightened again more slowly as whatever was blocking the light moved on.

This is technically known as an occultation, and it was asymmetrical - the exit (egress) of the light-blocking something was twice as long as its entry (ingress), as you can see in the animation above.

"In this work we report the discovery of a deep depression in the flux (by 80 percent) of EPIC 204376071 that lasts for a full day," the researchers wrote in their paper.

Unlike Tabby's star however, EPIC 204376071 might end up much easier to figure out. In fact, the researchers already have a few ideas. Sadly, none of them are alien megastructures, but they are pretty cool nonetheless.

So it's small, it's dim, it has a low mass, and it has a low temperature. It's also young for a star, around 10 million years old. It has a lot of flare activity, but is otherwise pretty quiet. These are all typical characteristics for a red dwarf - nothing, so to speak, hiding up its sleeve.

But a similar occultation with such an asymmetrical ingress and egress pattern has been seen before - not in a star, but in a candidate planet.

Stars don't have planetary ring systems; but if another body, such as a brown dwarf or large planet, were orbiting the star, and it had a ring system, it could produce a similar light curve.

The light curves between the two objects don't match up perfectly, but the researchers modelled the light curve that a large planet with a ring system would produce eclipsing EPIC 204376071, and got almost an exact match with their observations (again, see the animation at the top of the page).

It wasn't perfect - the model called for an orbital period of 28 days at a distance around 10 percent of that between Earth and the Sun.

But since the event was only observed once in 160 days, whatever is orbiting the star can't have an orbital period any shorter than 80 days. So, there's a bit of a dilemma there - although the modelled light curve is pretty compelling. 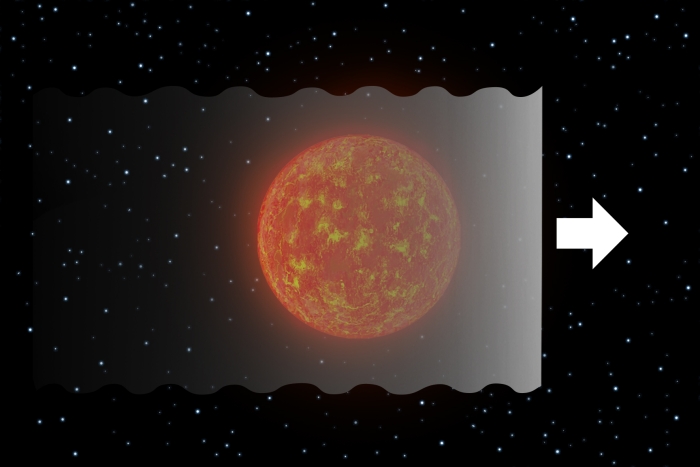 The other potential explanation the researchers put forward is a sheet of dust moving between us and the star, thicker at the leading edge and then tapering off (demonstrated in the above diagram), in quasi-permanent orbit around the star. The modelled light curve they produced did not match quite as well as the disc model.

It didn't, the researchers thought, seem like a likely scenario, but definitely not entirely impossible.

Both light curves can be seen below, the disc on the left and the dust sheet on the right. The models are in blue, and the observation data points in red.

So… is it a ringed planet? A curtain of dust? Something else, like the protoplanetary discs often seen around very young stars? (The researchers didn't mention that last one - we're spitballing here.)

But there are ways to help narrow it down - such as taking radial velocity measurements of the star to see if anything is orbiting it. Adaptive optics observations could be taken, too, to see if light is being scattered from dust structures.

While we wait for those, though, we're thrilled to welcome EPIC 204376071 to the glorious weirdo star family.