Technically, most species of jumping spider could probably be accused of having eyes bigger than their stomach.

But scientists have copped a pretty massive surprise in the shape of this newly discovered species, found in the Kumbharli Ghat mountain pass in western India. Unlike any jumping spider seen before, it's been caught eating whole tadpoles.

While conducting a botanical survey in the area back in 2014, researchers came across a curious sight on the banks of a shallow stream. A number of tadpoles were clinging to a rock face under rivulets of water trickling down a cliff.

And apparently spending a leisurely afternoon hunting the tadpoles was an unidentified species of black-and-brown spider known as a salticid, or jumping spider. 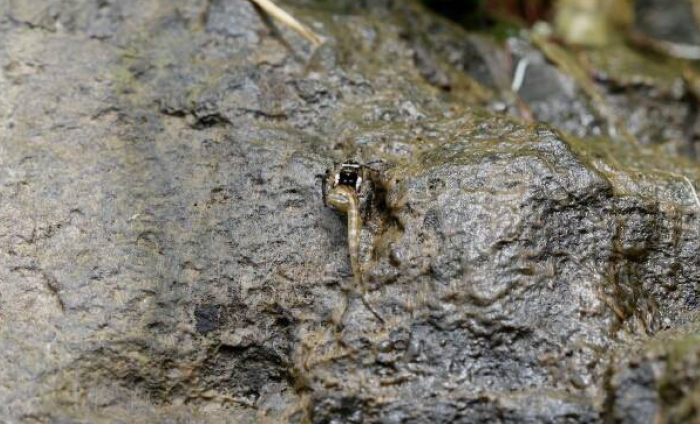 While they were observing the scene, the little champ succeeded, dragging its prey into a muddy retreat.

Clearly not wanting to interrupt a hard-earned meal, the researchers didn't capture the spider specimen, and were left to assume from its colouration that it could be closely related to a widely distributed species called Hasarius adansoni, or potentially be a new species altogether.

Of course, it's not the first time spiders have been caught hunting prey that's seemingly above their paygrade, or lives underwater. There are species of arachnid actually called fishing spiders; for what it's worth, whole adult frogs are on their menu too.

But no jumping spider has been documented to eat baby frogs. In fact, we're used to thinking of jumping spiders as these adorable little creatures that even arachnophobes can (almost) look upon without terror. Aww, what a cutie. (Sagar Satpute/Peckhamia)

There are species of jumping spider in Australia called peacock spiders which are so colourful, they could easily star in a children's television program.

Yet at just 8 millimetres (0.3 inches) in length, this particular species seems to be unaware that some of its relatives sip cocktails of nectar or stick to a diet of leafy greens.

Vegetarian species aside, their eyesight and speed make many other jumping spiders terrific hunters, who often catch prey a lot larger than themselves.

And being a diverse group, salticids make up something like 13 percent of all spider species as well, having adapted to a range of environments all over the globe.

The researchers are planning more expeditions to the area in western India, and hopefully they will catch this little guy in action again, so we can learn more about its habitat and behaviour.

This research was published in Peckhamia.