For The First Time, Scientists Have Sequenced The Genes of an Extinct Marsupial Carnivore

Australia's extinct carnivorous marsupial, the thylacine, has long been held up as a tragic symbol of humanity's lack of care for the other creatures that share our world, excessive hunting thought to be the leading cause of its demise.

Scientists have now sequenced the animal's genome, and we finally have some answers about the last surviving member of the Thylacinidae family - animals that roamed the Earth for tens of millions of years.

Also known as the Tasmanian tiger, Thylacinus cynocephalus became extinct on mainland Australia some 3,000 years ago, attributed - possibly erroneously - to competition from a rival predator, the dingo.

But, on Tasmania, isolated by rising sea levels 14,000 years ago, a population of the animals lived on into the 20th century.

It soon came to be regarded as a threat to livestock, and the Australian government issued over 2,000 bounties to help wipe it out.

It was declared extinct in 1936, and little is known about its behaviour, habitat and diet, or even which animal can be considered its closest living relative.

Now researchers have finally narrowed it down and gleaned some new information through genetic sequencing.

"The genome has allowed us to confirm the thylacine's place in the evolutionary tree. The Tasmanian tiger belongs in a sister lineage to the Dasyuridae, the family which includes the Tasmanian devil and the dunnart," said project leader Andrew Pask of the University of Melbourne. 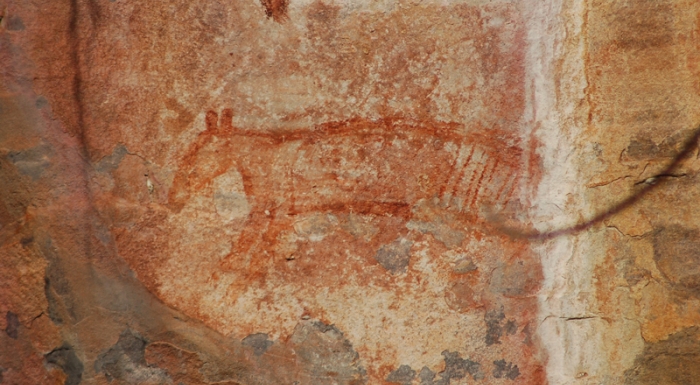 This also confirms that the Tasmanian tiger is a product of convergent evolution - when two unrelated animals evolve similar traits to adapt to similar environments or to fill an ecological niche.

Although it's a marsupial with a pouch, the thylacine skull more closely resembles that of a red fox or a grey wolf than the skulls of its closest relatives.

The team also learned more about the species' decline. For a while now, scientists have hypothesised that, much like Steller's sea cow, the Tasmanian tiger's extinction was more complicated than just being hunted to death.

What the researchers found after sequencing the genome was that the thylacine's genetic diversity and health was very poor, possibly due to their genetic isolation from mainland Australia.

But the results also suggest that, even before its isolation, the thylacine was already on a genetic decline. That's not to say that humanity didn't have a very strong hand in its extinction. We probably could have saved it.

Based on their work, the team is now hoping they can help another carnivorous marsupial facing a similar situation - the Tasmanian devil.

Similarly extinct and genetically isolated from mainland Australia, and similarly experiencing low genetic diversity before isolation, in recent decades, the Tasmanian devil has fallen prey to one of the few cancers known to spread through infection.

"Our hope is that there is a lot the thylacine can tell us about the genetic basis of extinction to help other species," Pask said.

But, he noted, it's too soon to talk about cloning.

"As this genome is one of the most complete for an extinct species, it is technically the first step to 'bringing the thylacine back', but we are still a long way off that possibility."

The research was published in the journal Nature Ecology and Evolution.