Well, we can add this to the list of weird things tattoos can do to your body: apparently they can mimic the symptoms of cancer, many years after the fact.

More precisely, lymphoma, as the case of a 30-year-old woman attests. She went to a clinic at Sydney's Royal Prince Alfred Hospital because she'd noticed lumps in both her armpits two weeks prior - a common symptom of lymphoma.

On examination, doctors detected a number of rubbery, non-tethered lumps up to 1.5 centimetres (0.6 inches) in diameter, but none of her other symptoms were consistent with lymphoma. She had no fever, no weight loss, no excessive sweating, and no itching or pulmonary symptoms.

When one of the lymph nodes was excised and examined, the woman's doctors found macrophages, the immune cells that "eat" invading foreign bodies, laden with black pigments from a large black-ink back tattoo she had had inked 15 years prior.

"We report a case of tattoo pigment hypersensitivity causing widespread lymphadenopathy 15 years after the tattoo was initially inked," the doctors wrote in their paper.

"To the best of our knowledge, the PET-CT findings of markedly glucose-avid nodes in multiple areas have not previously been described. This feature in combination with the clinical findings mimicked lymphoma." 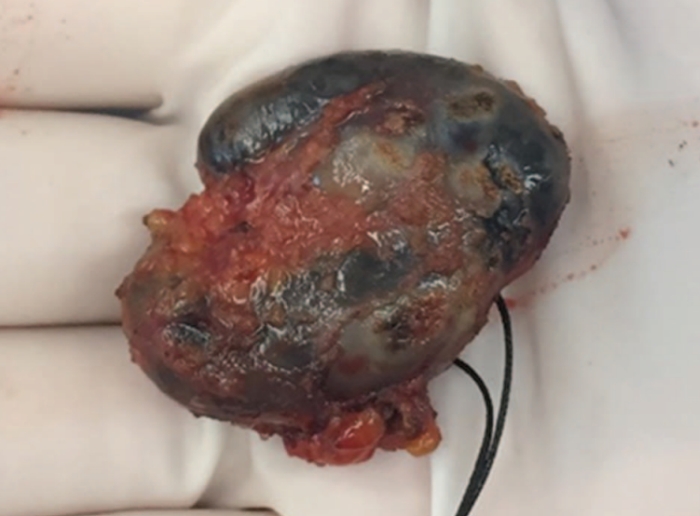 One of the excised lymph nodes. Credit: Annals of Internal Medicine

However, delayed reactions can occur. One man had an allergy-type reaction 20 years after getting a tattoo. There have also been several cases where tattoos have mimicked the symptoms of lymphoma of the skin - and at least one where these pseudolymphomas evolved into overt lymphomas.

There have also been several cases where tattoo pigment in the lymph nodes mimics  metastatic malignant melanoma - but this particular patient did not have melanoma.

It's well known that some particles from tattoo pigment ends up in the lymph nodes, deposited there by the immune system. Recent research also found that nanoparticles end up there as well, which could be a problem since the chemical composition of the pigment can vary from studio to studio.

But this is the first known case of a tattoo causing a reaction in the lymph nodes - and absolutely none at all in the skin.

"The case we describe is unique in that there was no skin reaction, only granulomatous change within the lymph nodes. In addition, no cutaneous, pulmonary, or systemic symptoms were observed to suggest systemic sarcoidosis," the doctors wrote.

"We believe that this case highlights the importance of a careful tattoo history and physical examination."

The case was detailed in the journal Annals of Internal Medicine.