Turning Urine Into Electricity Can Also Kill Pathogens in Wastewater

Fuel cells with microorganisms that feed on pee and generate electricity already sound like a pretty clever trick. It's one of the emerging biotechnology solutions in a world that's moving away from fossil fuels.

But now scientists have taken it a significant step further, showing that not only can you power mobile phones and light globes with urine, but you can also kill pathogens in the wastewater as you do so. This development makes the technology even more attractive for use in the developing world.

A research team from the University of the West of England (UWE)  in the UK has already demonstrated that it's possible to rig a urinal with cheap pee-powered fuel cells to generate enough electricity for the cubicle lighting.

The trial, created in partnership with Oxfam in 2015, showed the potential of this technology for places like disaster zones and refugee camps, where power supply is often lacking and lack of outdoor lighting at night makes people more vulnerable to potential assault.

But if this biotech can also kill pathogens in wastewater, that opens up a host of other potential uses, including routine installation in off-grid areas of the world where municipal resources for cleaning waste are in short supply. 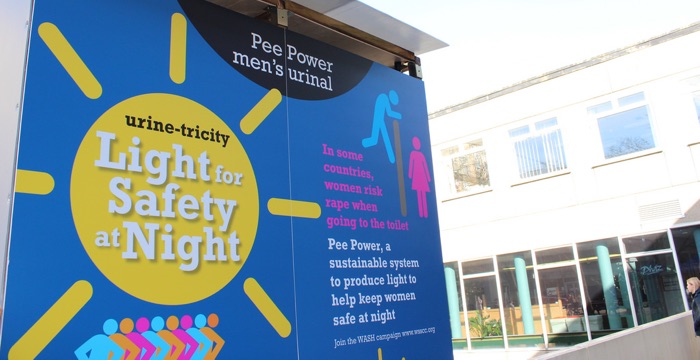 The technology runs on microbial fuel cells (MFC) in which microbes feed on organic material such as urine, fuelling their growth and generating a small amount of energy in the process.

"The MFC is in effect a system which taps a portion of that biochemical energy used for microbial growth, and converts that directly into electricity - what we are calling urine-tricity or pee power," lead researcher Ioannis Ieropoulos explained back in 2015.

Studies have shown that MFCs seem to have some disinfecting properties, likely due to the generation of hydrogen peroxide during the energy generation process. This disinfection happens at a later stage in the fuel cell system, so it doesn't kill the microbes powering the MFC.

This disinfection potential gave the UWE team an idea to systematically test how MFCs could be used to purify wastewater. For this, they picked one of the most important gastrointestinal pathogens, a strain of the Salmonella bacterium which causes typical food poisoning symptoms.

"This species was introduced into an MFC cascade system treating human urine, to determine the anodic killing efficacy when operating in continuous flow conditions," the researchers write in the study.

When they checked the outflow at the end of the purification process to measure the remaining pathogen levels, they found just what they had hoped for - greatly reduced Salmonella counts.

"We were really excited with the results – it shows we have a stable biological system in which we can treat waste, generate electricity and stop harmful organisms making it through to the sewerage network," says Ieropoulos.

In fact, the batteries destroyed these pathogens so effectively, they brought their levels down to what's considered acceptable in conventional sanitation practices.

"We have reduced the number of pathogenic organisms significantly but we haven't shown we can bring them down to zero – we will continue the work to test if we can completely eliminate them," says one of the team, microbiologist John Greenman.

To raise awareness of this project, which is founded by the Bill & Melinda Gates Foundation, the team has also incorporated their tech into a portable toilet that will get some limelight at this year's Glastonbury music festival in the UK.

Energy generated by the 'Pee Power' toilet will be used to power information displays at the festival. The plan is to process over 1,000 litres (264 gallons) of pee a day, using the electricity for a set of ten info panels.

"The festival updates are one way of showing that Pee Power and the MFC technology can be developed for a whole range of uses," says Ieropoulos.

The research has been published in PLOS ONE.