The mysteries to behold in the world's vast oceans never cease to amaze us. Like this latest haul of deep-sea creatures with bulging torsos, spiky backbones, armor-like horns and eerily translucent bodies that are strangely beautiful – and perplexing.

Reefed from the depths of the Gulf of Mexico, the critters are a collection of otherworldly beasts, some of which have never been seen before.

But it turns out the bizarre critters are not actually representing new species. Painstaking work has now revealed these are larval and juvenile forms of deep-sea shrimp and prawns which inhabit some of the deepest, darkest depths of the oceans.

"Many species progress through a series of larval stages… often representing bizarre forms unidentifiable from their adult counterpart," write Heather Bracken-Grissom, a marine scientist at Florida International University, and graduate student Carlos Varela who sought to identify a collection of the unique specimens with the help of genetic tests.

Taxonomy – the classification of where organisms belong in the tree of life – is tricky at the best of times, let alone when you're looking at teeny tiny specimens plucked from the open ocean at depths of 1,500 meters, as the researchers did.

Shrimp and lobster developmental stages collected in the Gulf of Mexico. (Danté Fenolio/DEEPEND/RESTORE)

In the past, the only samples scientists had to work with were half-digested specimens found in the guts of fish, tuna and dolphins or, more pleasantly, single specimens described almost two centuries ago, such as the duly named Cerataspis monstrosus – which is now known to be a larval form of Plesiopenaeus armatus, a deep-sea shrimp that lives in the ocean's abyssal plains up to 5,000 meters below the surface.

"There are so many instances where we have documented creatures in infant or larval stages and have no idea they become as adults," Bracken-Grissom said at the time of her 2012 discovery which reunited C. monstrosus with P. armatus.

Try as scientists might, many families of deep-sea shrimp are also "fraught with taxonomic problems" because rare and unusual larval stages have been mistakenly described as new genera or species.

In this latest study, Bracken-Grissom and Varela matched 14 larval and juvenile species to their adult counterparts using DNA barcoding, a technique that involves comparing short segments of DNA extracted from known and unknown specimens.

Before this study, scientists knew next to nothing about the larval stages of 10 of the 14 deep-sea species described. When you consider that some of the specimens collected for this study measure less than an inch long, about the size of your thumbnail, it's no wonder they've slipped through nets before.

"For many groups, larval descriptions are missing or non-existent, so this study represents a first step of many to advance deep-sea larval diversity," Bracken-Grissom and Varela write. 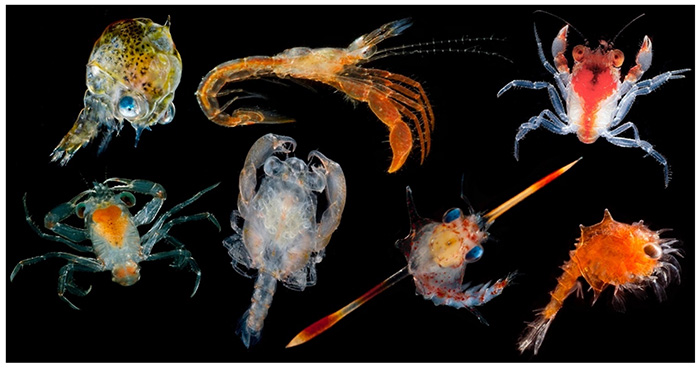 The duo tested, sketched, measured and described some of the curious creatures collected on eight research expeditions into the northern Gulf of Mexico and adjacent waters, many of which had never been seen before, and others that scientists had found difficult to rear in the lab.

What they revealed was a dazzling array of larval and juvenile forms of different deep-sea shrimp species, adding new pieces to the puzzle of their complex life cycles – which, in some cases, are thought to include nine or more larval stages.

One of the larval specimens, identified as a member of the Alvinocarididae family of shrimp that inhabit deep-sea cold seeps, was found in waters deeper than it ever had before, at depths down to 1,000 meters.

Another was identified as a juvenile Funchalia villosa, a species known to make daily vertical migrations through the water column, ascending at night from depths of around 2,600 meters (8,530 ft) to within 50 meters (160 ft) of the surface to feed.

Not all deep-sea shrimps are so transitory, though. "A lot of these larvae are found in the mesopelagic zone [in] open water between 200-1,000 meters [560-3,300 ft] and then settle to the deep-sea floor as adults," explains Bracken-Grissom.

Either way, matching infant forms to their fully-fledged adult mates is a crucial link in understanding where deep-sea shrimp and other crustaceans live at different stages of life and their place in the ocean's food web, the researchers say.

Crustacean larvae are often the main food source for small and large migratory fishes, cephalopods and some deep-diving marine mammals, "which means they are important to the food chain," she adds.

But the researchers suspect these little-known shrimp species probably have multiple larval stages – which can be influenced by seawater temperature, salinity and the food they eat – so more work and specimens will be needed to fully describe the secret life histories of these underrated deep-sea dwellers.

The research was published in the journal Diversity.