That 'Alien Megastructure' Star Just Kicked Into Action Again, And Scientists Are Freaking Out

The strangest star in the Universe has suddenly kicked into gear again, with researchers reporting that its light has started dimming in bizarre ways - just like it did two years ago when it baffled scientists with its irregular light emissions.

This time around, we get to watch the investigation in action, because over the weekend, astronomers started freaking out on Twitter, telling everyone with a telescope big enough to train in on the star and help them figure out what's actually going on here.

"As far as I can tell, every telescope that can look at it right now is looking at it right now," astronomer Matt Muterspaugh from Tennessee State University told Loren Grush at The Verge.

This is not a drill.

Astro tweeps on telescopes in the next 48 hours: spectra please!

First discovered in 2009, the 'alien megastructure' star - known officially as KIC 8462852, or Tabby's star - is located about 1,500 light-years away, between the Cygnus and Lyra constellations of the Milky Way galaxy.

In late 2015, a team of astronomers led by Tabetha Boyajian from Yale University noticed something peculiar - a strange pattern of light surrounding the star that to this day, no one's been able to explain.

One of the best ways for scientists to locate and study distant stars like this is to track how they emit light - slight, periodic dips in brightness can reveal the existence of one or more large objects orbiting it in a regular fashion.

These dips in brightness are usually very slight, with stars typically dimming by less than 1 percent every few days, weeks, or months, depending on the size of planets orbiting it.

But KIC 8462852 has been experiencing erratic dips of up to 22 percent, and there's no periodic orbiting going on here - just a bunch of irregular, light-blocking shapes, with no discernible pattern to them.

The 2015 patterns were so weird, they even prompted one scientist to offer up the possibility that an 'alien megastructure' such as a Dyson Sphere has been messing with its emissions.

"Aliens should always be the very last hypothesis you consider," astronomer Jason Wright from Penn State University told The Atlantic at the time, "but this looked like something you would expect an alien civilisation to build."

Others have suggested comet swarms, the remaining dregs of a devoured planet, or even a scenario where KIC 8462852 is so distorted, it spins in a way that gives it a larger radius at the equator than at the poles, but none have been widely accepted by the scientific community.

The problem was a lack of data - there simply wasn't enough to prove or reject the various scenarios that were being thrown around.

"We were kind of stuck in a spot where we couldn't do anything," Boyajian told The Verge. "We had all the data we could, and to learn anything more, we needed to catch it in action again."

Fortunately, KIC 8462852 decided to throw us a bone, and has gone in for another round of bizarre dimming to give scientists some fresh data to work with.

According to Wright, the star stated dimming again on early Friday - all of a sudden, it had dimmed by 3 percent in just a few days.

"And so we are officially on alert, and we are asking astronomers on telescopes … to please take spectra (light measurements) of the star," Wright announced, as reported by Eric Mack at CNET.

Here's what the most recent bout of dimming looks like: 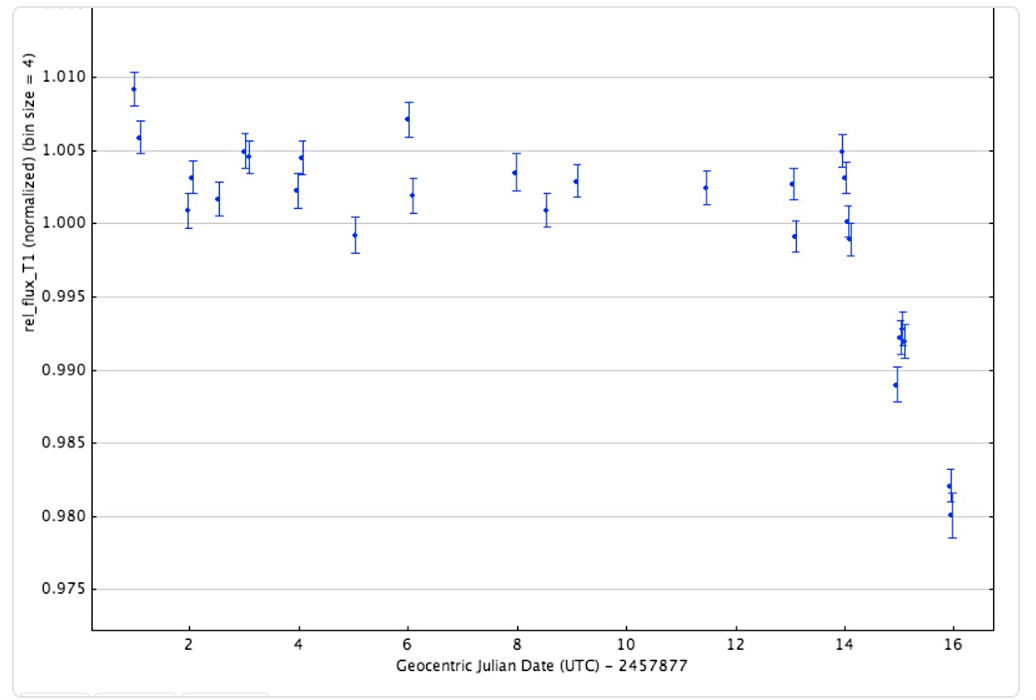 When Wright took questions from the public over the weekend, he said it's unlikely that the mystery of about KIC 8462852 will be solved immediately.

But we've now got astronomers from all over the world on the case, and a whole lot of new data, so we're better placed than ever before to figure out what's behind these unexplained light patterns.

In the meantime, you can watch Wright answer a bunch of questions about KIC 8462852 in the video below, and let's all just take a moment to enjoy the fact that no one's willing to discount aliens just yet - even though it's definitely the least likely explanation we have right now.

"That theory is still a valid one," Muterspaugh told The Verge, referring to Wright's Dyson Sphere idea.

"We would really hate to go to that, because that's a pretty major thing. It'd be awesome of course, but as scientists we're hoping there's a natural explanation."