Made famous for the car tunnel carved into its trunk more than 100 years ago, California's giant sequoia tree, known affectionately as the Pioneer Cabin Tree, has fallen.

The tree, which was estimated to be more than 1,000 years old, toppled over last weekend, after a vicious winter storm rolled through the Calaveras Big Trees State Park in Arnold, California.

"The Pioneer Cabin tree has fallen! This iconic and still living tree - the tunnel tree - enchanted many visitors. The storm was just too much for it," park volunteer Jim Allday announced on the Calaveras Big Trees Association’s Facebook page on January 9.

Pioneer Cabin stood a remarkable 45.7 metres (150 feet) tall, and was just one of many giant sequoias to call the park home.

"Sierra redwoods (also known as Giant Sequoias) are the largest objects ever to have lived on Earth. The fossil record of the redwood family dates back 180 million years to the age of the dinosaurs, and individuals can live over 3,000 years," explains the California Department of Parks and Recreation.

What made Pioneer Cabin stand out was its iconic tunnel, which was carved through the tree’s trunk in the late 1880s by landowners who wanted to attract more tourists to the park.

They also wanted to compete with another tree tunnel in Yosemite, called the Wawona Tree, Becky Little reports for National Geographic.

Here's what Pioneer Cabin looked like back in the 1800s: 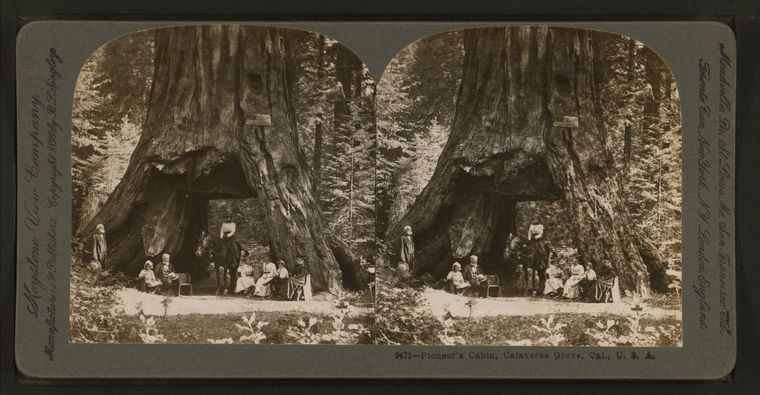 The Wawona Tree, which was thought to be 2,100 years old, fell in 1969, following a similar winter storm.

Both of these tunnels were created by carving into a fire scar - a wound on the tree’s bark leftover from forest fire - along the tree’s base.

"One of the reasons for the falling of both trees might be the very thing that attracted visitors to them in the first place," Travis M. Andrews reports for The Washington Post.

"These trees are made to burn, their protective bark healing itself over time. Carving into a fire scar slows this progress."

Andrews also cites a guidebook provided by the California Department of Parks and Recreation all the way back in 1990, which indicates that the tunnel might have led to the tree’s demise:

"Sierra redwoods evolved in the presence of fire, and not only have adapted to it, but depend on it in several ways. Heat from fire causes the cones to open and release the seeds. Fire clears the ground of duff, litter, and brush so the tiny seeds can reach the mineral soil and receive plenty of sunshine . . .

The opening [in the Pioneer Cabin tree] has reduced the ability of the tree to resist fire. A few branches bearing green foliage tell us that this tree is still managing to survive."

But it wasn’t just an average storm that ripped through the area last weekend.

Those who have assessed the damage in the forest say that Pioneer Cabin shattered when it hit the ground and the entire area around it was flooded, suggesting that the power of the storm was just too much for the old tree to handle.

"When I went out there (Sunday afternoon), the trail was literally a river, the trail is washed out," Allday told Peter Hockaday at SF Gate.

"I could see the tree on the ground, it looked like it was [lying] in a pond or lake with a river running through it."

Right now, it remains unclear how well the tree was fairing before the storm destroyed it, but Jim Allday’s wife, Joan, said that the tree might have been almost dead and ready to topple.

"It was barely alive, there was one branch alive at the top, but it was very brittle and starting to lift," she told SF Gate.

There's no plan to clear the tree from its final resting place yet - instead, it will become a habitat for other creatures who live in the forest.

"The tree will most likely remain where it fell, providing habitat for many creatures and slowly decomposing to improve the soil for future sequoias," the Calaveras Big Trees Association said in a Facebook post.

Though the world has lost one of its most famous trees, there are still many around worth celebrating.

The tallest known tree is a redwood named Hyperion, and it stands a towering 115.7 metres (376.6 feet) tall in northern California. It's believed to be around 800 years old.