The Mystery Path of Antarctica's Blood Falls Has Finally Been Revealed

When Antarctic explorers first discovered a cliff stained with blood-red water in 1911, they assumed that red-hued algae were responsible for the colour. The place quickly became known as Blood Falls, although it turned out to be neither blood nor algae.

In fact, Blood Falls is the result of slowly oozing, iron-rich saltwater that oxidises in contact with air, just like rust. The water is so salty, it's more accurately described as brine. And now geologists have finally figured out where all that brine is coming from.

A new study led by researchers from the University of Alaska Fairbanks has outlined the path the red brine takes to escape from underneath a glacier that's at least 1.5 million years old.

Blood Falls is located at the northern end of Taylor Glacier, which stretches over 100 kilometres (62 miles) through the Transantarctic Mountains.

When Taylor Glacier was extending across the icy continent a million years ago, it trapped a small saltwater lake under countless layers of snow and ice. The saltwater became more and more concentrated, until the brine was too salty to freeze at regular temperatures.

That subglacial brine lake has been scraping iron from the underlying bedrock, giving it its signature rusty colour once it reaches the outside world. But that path to the outside had remained a mystery until now. 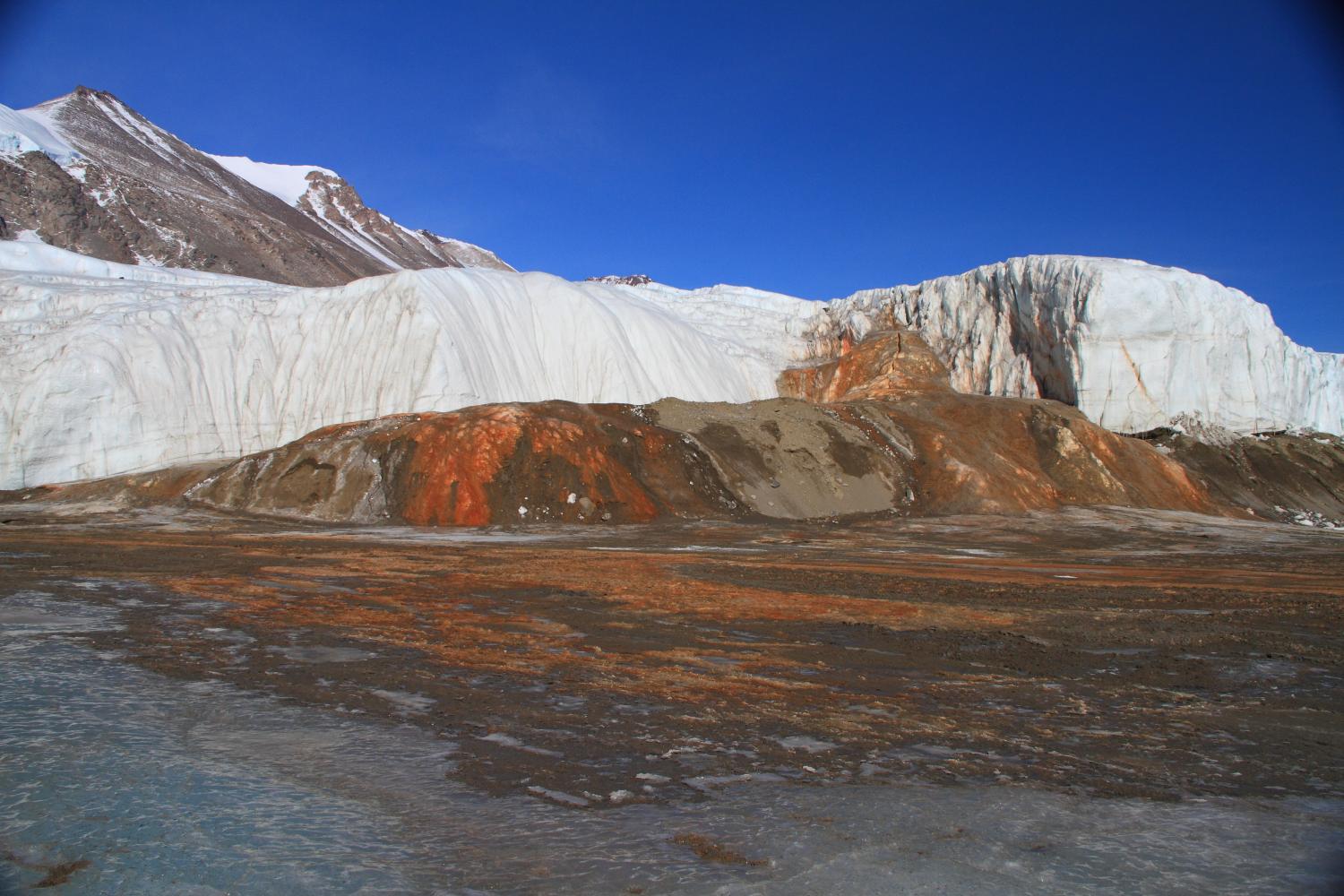 To understand where he brine is coming from and how it's oozing out of the fissure in the glacier, the team used a radar method called radio-echo sounding (RES), which is commonly used for investigating glaciers.

"The salts in the brine made this discovery possible by amplifying contrast with the fresh glacier ice," says lead researcher Jessica Badgeley from Colorado College.

The team moved the antennae of the RES radar across the glacier in a grid pattern, revealing a picture of what lay beneath the ice, much like the way bats use echolocation to detect their surroundings.

As it turns out, Taylor Glacier is hiding a network of crevasses where the brine is injected into the ice under immense pressure. The team then tracked the 300-metre (985-foot) path the brine takes through these pressurised channels until it reaches the top of Blood Falls.

Their finding also finally explains how liquid water - even if it's super-salty - can flow through an extremely cold glacier.

"While it sounds counterintuitive, water releases heat as it freezes, and that heat warms the surrounding colder ice," says one of the team, glaciologist Erin Pettit.

Brine has lower freezing temperatures – and, together with the heat, it helps the movement of the liquid.

This discovery could help researchers find out more about the ecology of the subglacial brine lake, which is not nearly as dead as you might expect.

Previous research has found that the salty brine is actually home to some extremely hardy bacteria. Cut off from the world for thousands of years, these microbes have had nothing to feed on except sulphate, which many bacteria can use for energy.

Trapped beneath the glacier with no light and oxygen, the bacteria started recycling their sulphate supply, reducing it to sulphite – which would react with the high iron content of the water, producing more sulphate for them to feed on.

Scientists think that this surprising adaptation might not even be limited to Taylor Glacier, and is just one example of long-term life surviving trapped under millennia of ice.

Now researchers think that the latest discovery on how the brine forms a path to the freedom of Blood Falls could also give us clues on the evolution of these sturdy microbes.

"This study can bring us closer to understanding the coupled geochemical evolution of and microbial environment hosted by the brine," they write.

The findings are published in the Journal of Glaciology.