The Best Tweets From The #ILookLikeAnEngineer Hashtag

It all started with a recruitment campaign gone wrong, but #ILookLikeAnEngineer has now become one of the most powerful hashtags to date, attracting tens of thousands of tweets since Monday night, and it's totally changed the conversation about stereotypes in the field.

The billboard that kicked off the whole movement featured a photo of Isis Wenger, who's a full-stack engineer at tech company OneLogin, next to a nice quote about how much she loves her team, and was displayed at San Fransisco subway stations in an attempt to attract the best engineering graduates. It's a standard Silicon Valley recruitment strategy, but what wasn't so normal was the response.

The fact that Wenger is an attractive female led some people to believe that she'd been hired to take part in the campaign (because it wasn't what "a female software engineer looks like", as one charming guy commented on Facebook) and others simply didn't like her "sexy smirk" (wtf?). It had all the makings for a marketing fail, but Wenger took to Medium to respond to all the attention, and in the process unintentionally kicked off the hashtag.

"The negative opinions about this ad that strangers feel so compelled to share illustrate solid examples of the sexism that plagues tech," she writes. "I didn’t want or ask for any of this attention, but if I can use this to put a spotlight on gender issues in tech I consider that to be at least one win. The reality is that most people are well intentioned but genuinely blind to a lot of the crap that those who do not identify as male have to deal with." 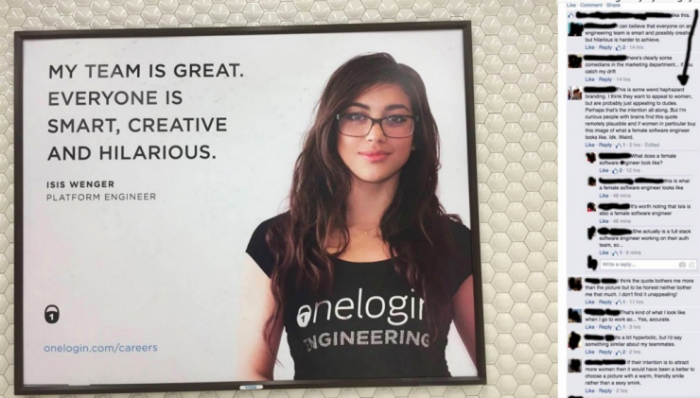 In the article, Wenger mentions some of her personal experiences with sexism in the industry.

While those are appalling things for any human being to have to experience at work, unfortunately, we can't say we were too surprised - remember #DistractinglySexy and #YesAllWomen anyone?

But the incredible thing that Wenger did was turn her bad experiences into something positive, by asking others who maybe don't fit the 'cookie-cutter image' of what an engineer looks like to share their stories over at her new site and via the hashtag #ILookLikeAnEngineer. She also started an IndieGogo campaign to raise funds for a billboard that would share those images and stories. More than US$1,500 has been raised in 10 hours.

Below are some of our favourite tweets so far from both men and women who maybe don't look the way you think an engineer should.

Missed this yesterday because I was, you know, coding. #ILookLikeAnEngineer pic.twitter.com/H6V6kzZVte

I do R&D in Biomaterials & train the next generation of tech savvy, industry ready graduates #ILookLikeAnEngineer pic.twitter.com/y2ctPPgm0u

At the airport bar a man said "Wow you don't look like an Electrical Engineer" #EnlightenMe #ILookLikeAnEngineer #bye pic.twitter.com/fnZCtgrW3a

I've written software to protect and break into networks. I also like math. #ILookLikeAnEngineer pic.twitter.com/XPYVoTO7e5

I worked as an engineer at @Intel + @Twitter, now I build features for Windows at @Microsoft #ILookLikeAnEngineer pic.twitter.com/ttGUnHseYH

I'm from Benin, West Africa. I'm Black. I have short hair, and I smile a LOT. #ILookLikeAnEngineer pic.twitter.com/3g0osIQxZ8